1,000 Flash Crashes at Once; What Role Did ETFs Play in Today's Meltdown?

Today's horrible market opening was particularly shocking, even to veteran market watchers. There was some incredibly unusual activity in the market meltdown. Investors felt as if they were riding a roller coaster but weren't certain they'd exit intact.

Now, there should be little doubt that a serious decline was not only possible but clearly expected. But the ferocity of the initial collapse followed by the extraordinary (albeit short-lived) rebound raised more than a few eyebrows. From CNBC:

Dubbed by one trader "1,000 flash crashes," the market opened to tumult in which multiple stocks and in particular exchange-traded funds cascaded lower as orders failed to get filled and prices went ballistic.

In all, 1,278 so-called circuit breakers—trading halts imposed when shares fall to various levels—were tripped across the major exchanges as the Dow Jones industrial average surrendered more than 1,000 points early on, according to New York Stock Exchange officials. The number of tripped breakers was believed to be a record, with ARCA's 999 the most, with the Nasdaq next at 194. A typical day sees fewer than 10.

So was it a normal drop or was there something more sinister at work? We noticed three items of interest. First, many market experts seemed confounded by the suddenness of the selloff, especially since it did not seem to be economically justified. from The Wall Street Journal tonight:

The severity of the selloff in stocks—shares of J.P. Morgan Chase & Co. were down more than 20% at one point early Monday—confounded some observers, because the U.S. economy is showing few of the red flags that preceded major market downturns in the past. The economy continues to expand, corporate earnings outside the energy sector are staying aloft, and credit remains widely available at historically low interest rates even for some junk-rated companies.

The second it was clear that the computers took over. There was very little human trading at the open when the market staged its initial collapse. It was very reminiscent of the 2010 "Flash Crash." We have already explained how flash crashes can be induced as an act of economic warfare.

The third thing we noticed was the role of Exchange Traded Funds (ETFs) and how strangely they acted. In fact, this may have been the most interesting thing about the day. Again from CNBC:

Lutz said multiple ETFs plunged at the open, were halted, reopened and hit limits, then were halted again.

"Given many of these are U.S. underlying (it's) staggering to me these dislocations," he added. "As stocks broke sharply on the U.S. open, triggering halts, it seems the ETF arbitrage community opted to sit out the first few minutes."

A number of ETFs fell well below their net asset value, or the value of the underlying stocks that make up the respective funds.

"The flash crashes happened today in the ETF market," said Joe Saluzzi, a principal at Themis Trading. "There was a problem pricing some of these ETFs, and that's something that needs to be looked at."

There were very strange examples where the ETF dropped dramatically, much lower than the price of the shares it represented. Panic was induced and this may have led to forced liquidation later in the day which in turn caused the market to drop after a bounce.

We warned about ETFs in Secret Weapon; How Economic Terrorism Took Down the U.S. Stock Market and Why It Can Happen Again (pages 84-85):

"ETFs generally drive the movement in the stock market at the end of each trading day, when the funds consolidate their gains or losses by selling or buying huge blocks of stock….Because of the disparities between ETF prices and the underlying stock prices that commonly exist near the end of the trading day, there is a rush to buy and sell stock at that time."

Basically, we explained how a terrorist could use ETFs to trigger a stock market crash. To do so, one might force early ETF selling well beyond what the market decline required early in the day, inducing panic, and then watch the ETFs liquidate their holdings in a mad scramble at the end of the day. Sort of sounds like today's activity.

In August 2013, CNBC discussed how ETFs might cause the next crash. Since there wasn't a crash between then and now, were they prophetic?

And, don't forget that a Russian spy was caught trying to learn how to "destabilize" American stock markets using ETFs. Here is an excerpt from Justice Department charges regarding the case against three Russian spies: 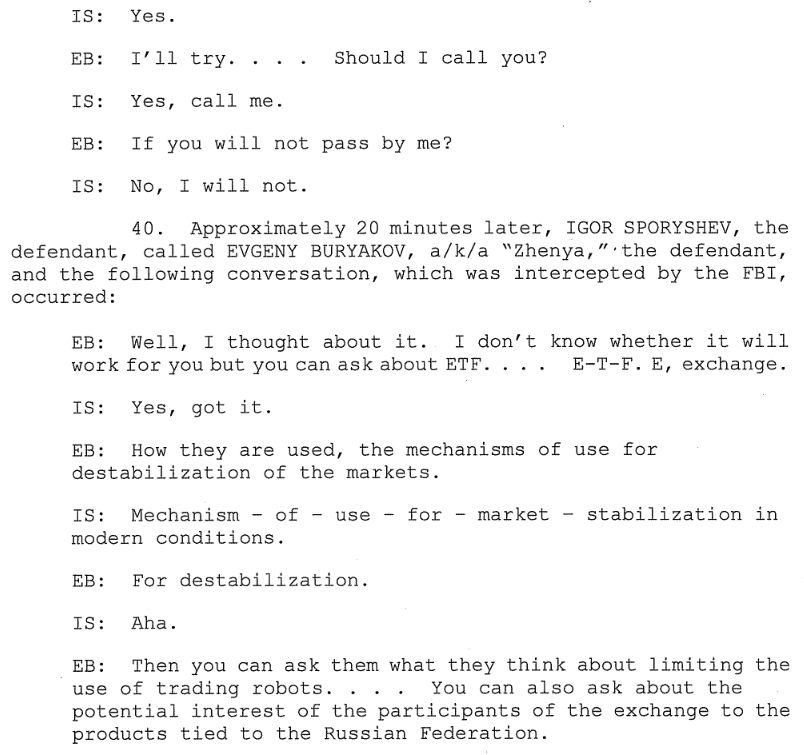 The Russians were seeking ways to destabilize stock markets with ETFs? Interesting. We've covered this before including Russia's threats to crash our markets.

Given the very obvious global economic war that is underway, combined with the Russian interest in flash crashes, hacking the NASDAQ, and ETFs, can we absolutely rule out financial terrorism as a trigger in today's unusual market activity?