A recent poll suggests that the fear of an economic crash has never been greater with a record 72% of Americans claiming serious concern. Now, couple that with experts from the Bank of International Settlements saying that we are defenseless against the next financial crisis and you can see the potential for problems. Then, add the uncertainties caused by tectonic shifts in our national culture from rapid-fire Supreme Court decisions and new executive trading powers. Mix in a generous dosing of cyber exposure. Add a dash of Greek tragedy. Mix well.

Is there any wonder that people are concerned?

The stock market has more than tripled from the lows of 2009. People aren't feeling the wealth, however. This may be because much of the post-2009 gain has gone to the very wealthy while the middle class has felt basically shut out. As a result, an increasing number of Americans have chosen to put their lives on hold, hoping for some personal evidence of economic progress. This is not a sign of strength.

From the American Institute of CPAs (AICPA):

More than Half of Americans Delayed a Major Life Decision in Past Year for Financial Reasons  Published June 25, 2015

NEW YORK, (June 25, 2015) –Buying a home or starting a family are just a few of the major decisions that people might regard as milestones in their lives. However, a new survey found that a majority of American adults (51 percent) have delayed at least one important life decision in the last year due to financial reasons. This represents an increase of 20 percentage points from a similar survey conducted in 2007, when 31 percent of Americans reported delaying a major life event.

The new survey, conducted by phone for the American Institute of CPAs (AICPA) by Harris Poll in March among 1,010 adults, found many of the specific life events Americans are delaying for financial reasons have more than doubled since the 2007 survey.

Now, if people were simply becoming more conservative, this might not be a problem. The reality is, however, that people are worried and delaying major events because they are stretched thin. Total debt has ballooned in recent years, reaching almost $60 trillion last year. While there has been some progress in credit card debt as a percentage of household income the gains have been more than offset by the explosion of student debt. Believe it or not, student debt surpassed credit card debt in importance in the year 2010 and has been growing rapidly ever since.

Student debt was just getting started five years ago. The explosion can be seen in the following Fed Chart that shows consumer loans owned by the Federal Government. The vast majority of this is student debt. 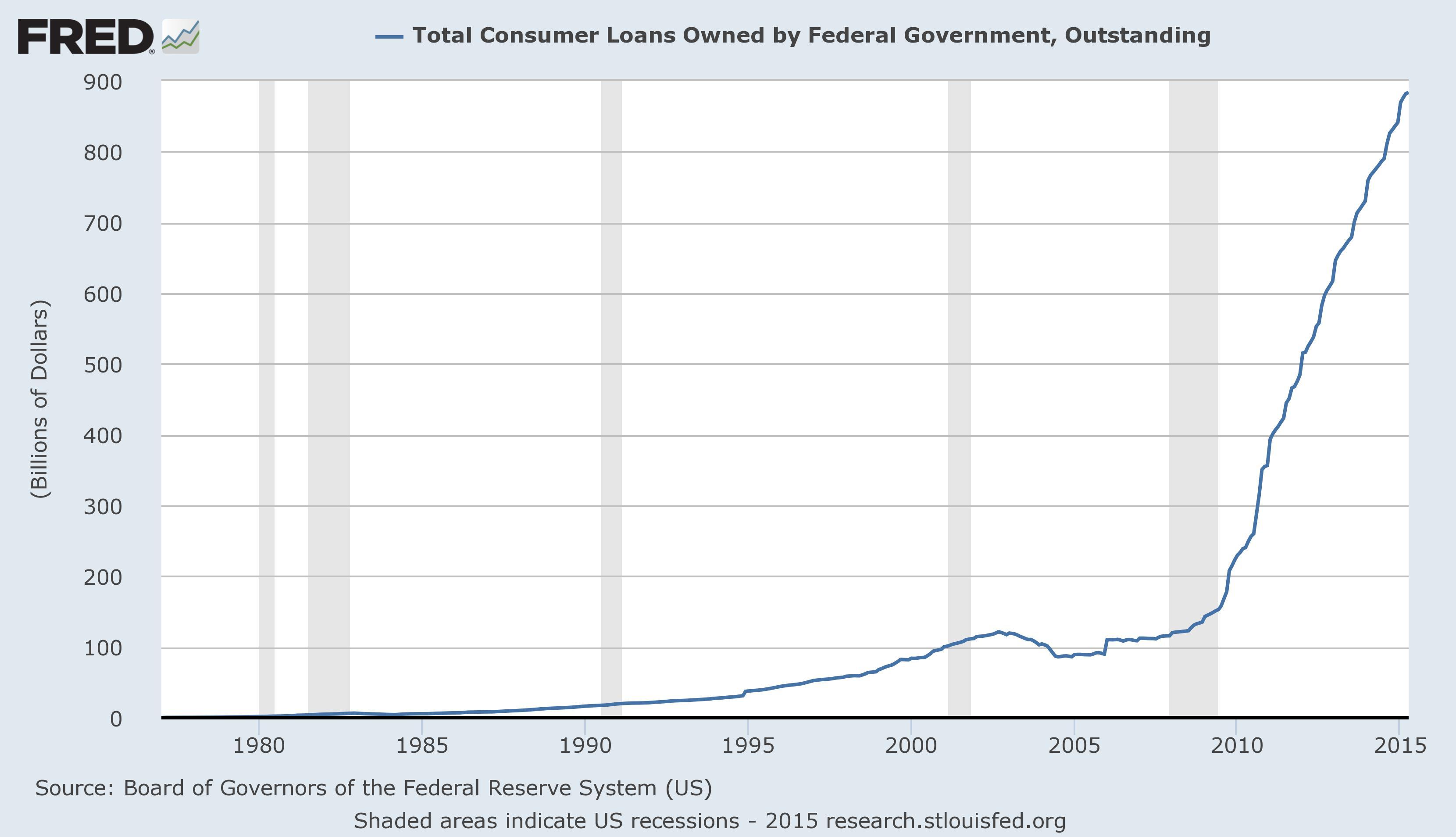 The sheer size of this problem is hard to grasp. High student debt levels can be devastating for individuals and catastrophic for the economy as a whole. This, in part, explains why it has seemed so hard to jumpstart the economy.

The bottom line is that it has not been economic prudence that has caused Americans to pull back in spending. That wouldn't necessarily be such a bad thing. Unfortunately, it is massive debt (particularly student debt) that has strangled the potential for economic optimism.

So what does this have to do with economic warfare? Everything. The fact that Americans are so worried financially is further evidence of our vulnerability. Panicked people who are stretched to their limits are unprepared for a financial war. And the Russians and Chinese are well aware of these vulnerabilities. Five years ago, Citizens Against Government Waste made a commercial that was effectively banned from television. A YouTube survives, however.

Watching the Greek economy fail should be a warning of how debt puts the borrower at the mercy of the global system. Realizing that Russia and China are rapidly building alternative financial systems should make their intentions obvious.

We know that Russia and China have serious economic problems of their own–in many ways far worse than ours. But we also know that their people are better prepared for economic hardship in many respects. Americans are no longer hearty. We are vulnerable and our leadership is arrogant. That is a very bad combination.

Economic problems are not confined to Greece. There is pain around the world and much of the world is preparing for a global economic war. We should at least recognize the signs of the times.