A Single, Man-Made Stock Market Crash is a New-Concept Weapon 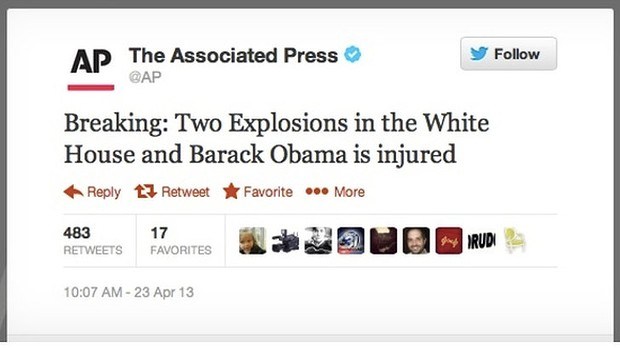 When the two PLA Colonels wrote Unrestricted Warfare in 1999, they listed "a single man-made stock market crash" as one of three specific new-concept weapons for the 21st Century. They called it financial warfare.

We have been warning about market manipulation for several years, first in our report for the Department of Defense and then in the New York Times Best-Seller, Secret Weapon. Yet, most in the intelligence and defense community know little about the financial markets. And, those who understand the markets generally know little about defense. Unfortunately, our enemies have studied both.

This week, we saw a hacked Twitter account used as a weapon resulting in a mini flash crash for stocks. Even as the market recovered in minutes, estimates are that there was something like $150 or $200 billion lost even if only briefly. We mentioned this in an earlier post.

While any human could clearly see that the White House was not bombed as the hacked tweets claimed, computer algorithms that monitor social media sites could not tell the difference. As a result, massive sell programs began and other high-frequency algorithms picked up on it.

The Syrian Electronic Army claims that they were the source of the false tweet. It was more than an April Fool's Joke. They sent a message and investors were hurt. While most long term shareholders didn't suffer loss as stock prices rebound, some had "stop-loss" orders to sell if their holdings dropped below a certain level. From The Week:

A HOAX tweet claiming President Obama had been injured in a White House explosion wiped more than £90billion off the stock market in a matter of seconds last night . . .

But while the stock markets bounced back once it became clear the reports were false, the denials could not prevent "momentary chaos" in a world where "super-high-speed computer trades dominate the market", the Washington Post notes.

As the Daily Telegraph‘s Willard Foxton writes, the incident demonstrates the "potential to hack a news organisation's twitter feed and then make a killing off a short". Any cleverly timed attack could be worth billions.

This was not a surprise for anyone paying attention. Two years ago there were warnings that a bad tweet could hammer stocks. From Huffington Post:

Sniffing Out Socialbots: The Combustive Potential of Social Media-Based Algorithms

Imagine a damaging rumor about a company that you own shares in is posted on Twitter. Algorithms monitoring social media feeds to gauge market sentiment and act upon news could instantaneously trade billions of dollars worth of these shares, causing the value to plummet. The rumor is entirely untrue but, in the time it takes for an explanation to be published by the company, the damage is done. The stock never fully recovers because the prevailing attitude of the day seems to be "where there is smoke there is fire."

It may sound like science fiction, but it is not. Yesterday's news headlines have been replaced by split-second 140 character Tweets containing both fact and fiction. According to an August 2011 infographic from media agency We Are Social, there are 138,888 Tweets per minute, 180 million posted each day and 1.6 billion search queries per day. There are 200 million Twitter users with 450,000 new accounts created daily.

And Twitter is just one social media site that algorithms can monitor; Facebook, LinkedIn and blogs broadcast information that can be mined to identify meaningful patterns. Layer social media on top of traditional sources of electronic news headlines and the possibilities are endless.

News coming via Twitter can beat the fastest wire service or government agency's alerts. In August 2011 when a magnitude 5.8 earthquake struck the state of Virginia, the first Twitter reports sent from people at the epicenter reached New York about 40 seconds ahead of the quake's first shock waves, said social media company SocialFlow. The flood of messages surrounding the earthquake peaked at 5,500 Tweets per second.

The first Tweets beat the U.S. Geological Survey's conventional seismometers, which normally can take from two to 20 minutes to generate an alert. The agency is now experimenting with Twitter as a faster and cheaper way to track earthquakes, according to the Wall Street Journal.

With the high frequency-obsessed trading community, speed is essential. And social media, particularly Twitter, is becoming a key source of high-speed information for feeding trading algorithms. 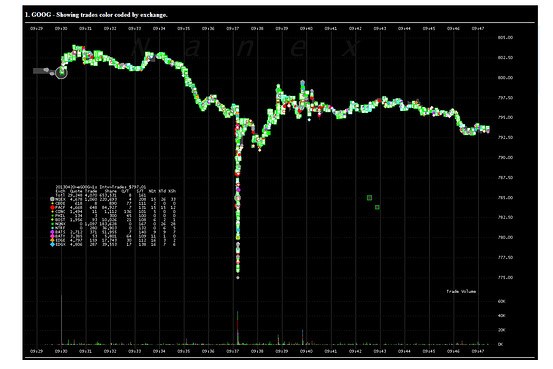 We have more questions than answers at this time. What was the ultimate motivation behind this? Was someone looking to buy shares on the dip? Were they hoping to profit from the decline? Or, were they merely attempting to cause financial mayhem and decrease confidence in the markets? Was someone testing weapons capabilities?

We are very concerned that this incident will pass without any real investigation or response. From Money Morning:

Why the Twitter Flash Crash Should Make You Angry

Twitter Flash Crash is a Red Flag for Regulators

Obviously, dealing with the HFT issue is a job for our market regulators – primarily the Securities and Exchange Commission (SEC).

Unfortunately, the SEC did nothing in the wake of the 2010 flash crash and has ignored other evidence of harm to the markets.

So while one would think the Twitter flash crash would get the SEC's attention, history shows that when it comes to HFT the agency is sleeping on the job.

And while the 2010 incident and this week's Twitter flash crash grabbed headlines, small-scale HFT-caused flash crashes are alarmingly common.

Active traders say there are at least a dozen "mini-flash crashes" every day – "mini" because they affect just one stock rather than the whole market.

No one can deny that this electronic hacking was a financial terror attack. It simply was. What will we do about it?