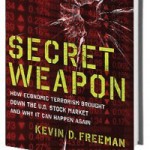 Published in 2012 by Regnery Publishing, Inc.

Exposes the vulnerable state of the American (and the world) economy

I am a licensed high school economics teacher and I can honestly say that I knew just enough about finance, the real nitty-gritty of the to and fro of the markets, to say that this book is downright scary. It is the proverbial "firebell in the night" that screams out that we have some serious weaknesses in the way we do business in America (and the rest of the free world as well). Some of this information was completely new to me (I am an econ teacher, but let's face it, high school economics is pretty basic stuff – I consider myself an informed entry level amateur in the world of finance – I know enough to know that I don't know much).