In mid-August, we raised the question as to whether or not environmental rules could be used as economic weapons. In actuality, the question is rhetorical and provocative. While most Americans have never thought in these terms, the answer is really quite obvious. Of course environmental rules are weapons of economic warfare, especially in a free society where the loudest voice often sets policy. In this context, money determines the loudest voice. No one doubts that polluters will use the political process to allow them the opportunity to continue to profit from their pollution. For some reason, however, few are willing to question whether or not there might be a profit motive somewhere behind the environmental movement.

Our August 16, 2012 post explained the process of using environmental groups to wage economic warfare with some specific examples such as the Sand Dune lizard. It also quoted a former KGB head of counter-intelligence that admitted that the Soviets did, in fact, support environmental groups in efforts to hamper U.S. economic growth. There is no doubt that the Soviets had the motive, means, and opportunity available for such operations. It only makes sense that they did. And, with Putin, a former KGB officer himself, running Russia, there should be little doubt that such efforts continue today. Many in Europe believe this and so do some in American think tanks. Surprisingly, even the Associated Press has acknowledged what we have been saying in a story that appeared at CNBC.com today, Next cold war? Gas drilling boom rattles Russia. Here is the link: http://www.cnbc.com/id/49230689.

1)  Hydraulic "fracking" is something Putin does not like. While Gazprom executives say that fracking will benefit Russia, most observers understand that the greater the global natural gas supply, the lower the world price for gas, and thus the reduction of leverage that Russia has globally. The AP story quoted Fiona Hill, an expert on Russia at the Brookings Institution who said: "Their (Russia's) days of dominating the European gas markets are gone." The article went on to share that Hill "heard President Vladimir Putin speak in late 2011 at a Moscow gathering of academics and media. She said in a blog post that ‘the only time I thought that he became truly engaged was when he wanted to explain to us how dangerous fracking was.'"

2)  If it is against Russia's political interests to have cheap and plentiful natural gas from fracking, it only stands to reason that the Russians might use means to limit fracking. From the AP story:  "…Hill noted that industry watchers in Europe already believe Russia is bankrolling environmental groups that are loudly opposing plans for fracking in Europe, which could cut down on Russia's natural gas market." Hill admits that there are many rumors to this effect and also admits that she has no proof that this is happening.

3)  As expected, the Russians deny any involvement in opposition to shale gas extracted by fracking techniques. But, the potential motive is so great that the question must be asked. The AP story quoted Kenneth Medlock III of the James Baker Institute for Public Policy at Rice University in Houston, "It changes the position at the bargaining table for everybody," Medlock said. "You stack all that up, and you start to realize, ‘Wow.'"

What is most troubling in all of this is the possible connection between a foreign energy producer (Russia) and domestic environmental groups seeking to ban fracking. While the AP article discusses the obviousness that such a collaboration might exist, it stops short of demonstrating a direct connection. When taken in context with our earlier article and the confession of a former high-ranking KGB official, it seems pretty certain. Is Russia willing and able to influence domestic regulations by funding environmental groups, filing lawsuits, or attempting to manipulate public opinion?

This concern is heightened because the Russian efforts appear to be very much in line with leftist elements of the "green" movement. Remember what the President privately said to Russia's Medvedev that was caught on a "hot" microphone?

Obama:  "This is my last election … After my election I have more flexibility."

Medvedev:  "I will transmit this information to Vladimir (Putin)."

This conversation took place in late March of this year. Here is the Reuter's comment:

"President Barack Obama was caught on camera on Monday assuring outgoing Russian President Dmitry Medvedev that he will have "more flexibility" to deal with contentious issues like missile defense after the U.S. presidential election."

Would such flexibility apply to environmental rules as well as missile defense? Possibly. It is clear that the Department of Interior could, if desired by the next Administration, rule that the Sand Dune Lizard was endangered and thus knock out as much as two million barrels per day of oil to be produced in the Permian basin. The lizard was kept off the endangered list in a common-sense agreement with the Department of the Interior. But, the decision was made in an election year and the Department reserved the right to reverse the decision at will in the future if they felt it needed. Simple question….if oil is close to $100 per barrel and we can extract two million barrels per day, would a two-inch lizard really be worth $200 million per day? The fact that this "compromise" decision was even needed speaks volumes about the risks we are facing. A few million dollars strategically invested in media or environmental advocacy might convince regulators that this lizard must be protected no matter the cost. A stroke of a pen could cause that few million dollars to wipe out $200 million in daily domestic production, keeping energy prices high and the United States dependent on foreign oil. If you think this impossible, then perhaps you haven't read how a "blind spider" halted a $15 million road development near San Antonio.

Please understand that we aren't saying that environmental regulations are bad. We need clean air and clean water and a good environment. But, we need to review the regulations with a fair understanding of their costs. For example, evolutionists believe that 99.9% of all species have gone extinct. Is it really worth $73 billion per year to keep one lizard alive? Or, would such resources be better spent elsewhere in protecting the environment? And, what if the motive behind the rules isn't really to protect a lizard at all but rather to reduce American energy production?

In this context, an even more direct link between foreign energy producers and environmental groups has surfaced. Headlines hit Drudge Report on Friday that the United Arab Emirates is financially supporting a Hollywood production designed to turn the American public against fracking. Here is Breitbart's version of the story:

The movie presents American oil companies as greedy corporations that trash and pollute small-town America in attempts to extract oil and gas from shale formations. Yet, because fracking has been proven environmentally sound in the real world, the movie suggests oil companies might be planting "doom-saying" environmentalists in order to undercut the legitimacy of environmental voices all-together.

In other words, if you agree with oil companies Damon says you're wrong, but if you oppose oil companies you may be a stooge for ExxonMobil.

Why would someone go to all this trouble to criticize American oil companies? Maybe it's all about lessening the competition. After all, the movie "is financed in part" by the United Arab Emirates (UAE), an OPEC member country.

Breitbart was by no means the only source for news on this topic. The Heritage Foundation had this report: 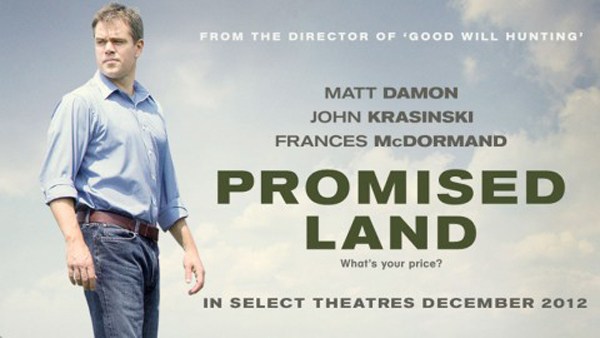 A new film starring Matt Damon presents American oil and natural gas producers as money-grubbing villains purportedly poisoning rural American towns. It is therefore of particular note that it is financed in part by the royal family of the oil-rich United Arab Emirates.

The creators of Promised Land have gone to absurd lengths to vilify oil and gas companies, as Scribe's Michael Sandoval noted Wednesday. Since recent events have demonstrated the relative environmental soundness of hydraulic fracturing – a technique for extracting oil and gas from shale formations – Promised Land's script has been altered to make doom-saying environmentalists the tools of oil companies attempting to discredit legitimate "fracking" concerns.

While left-leaning Hollywood often targets supposed environmental evildoers, Promised Land was also produced "in association with" Image Media Abu Dhabi, a subsidiary of Abu Dhabi Media, according to the preview's list of credits. A spokesperson with DDA Public Relations, which runs PR for Participant Media, the company that developed the film fund backing Promised Land, confirmed that AD Media is a financier. The company is wholly owned by the government of the UAE.

The UAE, a member of the Organization of Petroleum Exporting Countries (OPEC), has a stake in the future of the American fossil fuel industry. Hydraulic fracturing has increased the United States' domestic supply of crude oil and natural gas in areas such as the Bakken shale formation and has the potential to increase domestic production much more in the foreseeable future. That means more oil on the market, and hence lower prices for a globally traded commodity.

Fracking is boosting the country's natural gas supply as well. While the market for American natural gas is primarily domestic, the Energy Department recently approved Cheniere Energy's plan to export about 2.2 billion cubic feet of liquefied natural gas per day from Louisiana. The Department is considering LNG export applications from seven other companies.

A strong global market presence for American natural gas could also work to the UAE's disadvantage. The Arab nation ranks seventh worldwide in proven natural gas reserves. For instance, Japan's energy imports are expected to rise significantly over the next five years. The country is currently a major importer of UAE natural gas. If it decided to import more LNG from the United States to accommodate its increased energy demands, it could deal a blow to the UAE economy.

Another source of competition might come from other industries that use natural gas to manufacture other products. As American gas grows cheaper the United States becomes a more attractive destination for industries that manufacture petroleum-intensive products. The UAE, meanwhile, has invested billions attempting to shore up its own share of the plastics and chemicals markets, both of which rely on petroleum products and are likely to gravitate towards the cheapest sources of those products.

All of this suggests a direct financial interest on the UAE's part in slowing the development of America's natural gas industry. Pop culture can be a powerful means to sway public opinion. While Promised Land, like anti-fracking documentary Gasland, appears to inflate the dangers of hydraulic fracturing, it may have an impact on the public's view of the practice.

Here is the reality:  Environmental rules clearly can be economic weapons. Our enemies understand that something as simple as a "blind spider" discovered in piles of dirt can halt a $15 million road project. Of course, given the opportunity they will use such issues to manipulate our economy. They would be foolish not to do so.