China is Still Rising … and Threatening

There have been a number of reports in the financial press regarding a slowing in China. To some, this is a sign that the risks of economic warfare are diminishing. We fear that a wounded animal is the most dangerous.

Without much fanfare, there have been a number of concerning reports about China in recent days. These have been overlooked by many due to the election, the unfolding Libya situation, and our own domestic economic woes. When you put the reports together, they are quite troubling.

First, we see strong evidence that China remains committed to long-term goals. As one example, China's military is continuing to grow its influence. In fact, while President Obama has been touting that our military spending is so much larger than the rest of the world, the trends are troubling. Not only is official military spending understated in China but also even the understated spending is rising and on track to pass the United States. Few understand how intimately interconnected the PLA (People's Liberation Army) is with the entire Chinese economy. Here's a link to the analysis from the Washington Post:  http://www.washingtonpost.com/world/asia_pacific/chinas-increasing-military-spending-unnerves-neighbors/2012/10/23/4b66a7ae-1d29-11e2-ba31-3083ca97c314_story.html. Here is a key quote:

BEIJING — China's military spending has been rapidly spiraling upward, and the growing amounts are unnerving Beijing's Asian neighbors and policy planners in the Pentagon, who are openly wary about the country's long-term intentions.

Getting a handle on Chinese military spending is difficult because much of it is opaque and off the books, such as the People's Liberation Army's spending on research and space exploration. But various international think tanks estimate that China's military spending has risen from about $20 billion in 2002 to at least $120 billion last year.

The United States still spends four times as much on its military. But by some accounts, China is on course to surpass the United States in total military spending by 2035.

The increased spending has allowed the PLA to embark on a sweeping modernization program that includes new long-range cruise missiles, a new fleet of J-10 and J-11 fighter jets, an experimental stealth J-20 plane, a refurbished Soviet-era aircraft carrier and a growing space program, which includes China's own satellite navigation network. The PLA has also embarked on a long-term campaign to improve the inter-operability of its various ground, naval and air forces — long a weak point for the Chinese military.

Some critics, including China's skeptical neighbors, are alarmed at the spending, which they say is being used to bolster China's more assertive stance over long-disputed, uninhabited islands in the South China and East China seas. Longer term, some predict, China's growing military might shift the balance with American-armed Taiwan, which Chinese leaders consider a renegade province to be reunited with the mainland.

So much for a benign and peaceful China.

Now, we also see evidence of Chinese economic aggression against Japan as explained in this article from CNBC (http://www.cnbc.com/id/49325503):

A territorial dispute with China, which has disrupted Japanese firms operating on the mainland and hurt exports, is expected to deal a significant blow to Japan's economy, which is already losing its momentum and could contract in the fourth quarter, JPMorgan said.

Japan's gross domestic product (GDP) is set to contract 0.8 percent in the October-December period, according to investment bank JPMorgan, which had previously expected flat growth in the fourth quarter, hurt by a slump in exports to China and mainland tourists visiting Japan.

Asia's second-biggest economy expanded 0.2 percent in the third quarter and 1.2 percent in the first quarter, notching up a respectable rate of growth against a generally weak backdrop for the world economy.

"The economic impact on fourth quarter will not be negligible, the sales of Japanese consumer goods, such as autos, reportedly have already plunged. Some Japanese affiliates' shops and plants in China were damaged severely by demonstrators," Masaaki Kanno, chief economist at JPMorgan Securities Japan wrote in a note released over the weekend.

"We expect that Japan's exports of consumer goods to China will fall substantially in the fourth quarter," he added.

If the territorial dispute lingers through 2013, with no improvement in trade and tourism, Japan's GDP growth rate will fall to 0.4 percent next year, from previous estimates of 0.6 percent, Kanno said.

The impact is significant, as demonstrated by the drastic cuts in Japanese auto production (CNBC, http://www.cnbc.com/id/49324675):

Japan's Toyota Motor, Nissan Motor and Honda Motor plan to slash production in China by roughly half, the Nikkei newspaper reported on Monday, as a territorial row between Asia's two largest economies cuts sales of Japanese cars in the world's biggest auto market.

Sales have plunged at Japanese car makers since violent protests and calls for boycotts of Japanese products broke out across China in mid-September over the Japanese government's purchase of a group of disputed islands in the East China Sea from their private owner.

All of this corroborates what we posted earlier regarding how China is waging economic war against Japan, threatening to crash their bond market.

Next, we see evidence of China's long-term intention to remove the dollar's status as primary reserve currency. From China Daily (http://usa.chinadaily.com.cn/business/2012-10/24/content_15840920.htm): 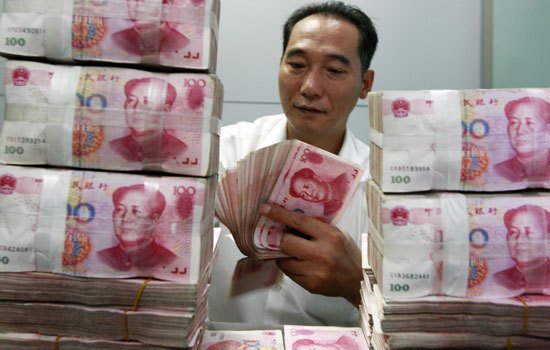 "A "renminbi bloc" has been formed in East Asia, as nations in the region abandon the US dollar and peg their currency to the Chinese yuan – a major signal of China's successful bid to internationalize its currency, a research report has said.

The Peterson Institute for International Economics, or PIIE, said in its latest research that China has moved closer to its long-term goal for the renminbi to become a global reserve currency. Since the global financial crisis, the report said, more and more nations, especially emerging economies, see the yuan as the main reference currency when setting their exchange rate.

And now seven out of 10 economies in the region – including South Korea, Indonesia, Malaysia, Singapore and Thailand – track the renminbi more closely than they do the US dollar. Only three economies in the group – Hong Kong, Vietnam, and Mongolia – still have currencies following the dollar more closely than the renminbi, said the report, posted on the institute's website.

The South Korean won, for example, has appreciated in sync with the renminbi against the dollar since mid-2010.

China has long vowed to raise its currency's global sway, along with the rise of its economy, which became the world's second-biggest last year." 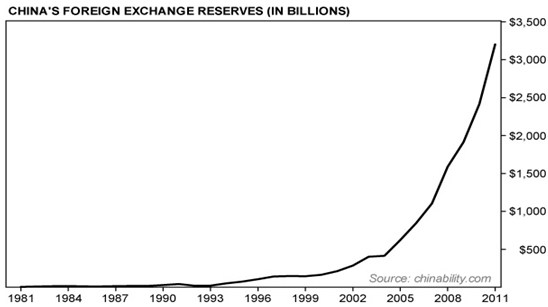 To many, this may seem mundane and expected. But, when coupled with the awareness of how important the dollar's Reserve Currency status is to our nation, it is ominous. And, coupled with the doctrine of Unrestricted Warfare that has been endorsed by the official Communist Party Journal, it is extremely concerning.

Remember step one from Unrestricted Warfare, "First, muster a large amount of capital." That was written in 1999. Now, consider that the next three steps are "launch a sneak attack against (the enemy's) financial markets," and then "bury a computer virus" and send a "hacker detachment." The endgame is to cause the enemy nation to fall into social panic, street riots, and a political crisis." We would argue based on the Chart that step one is complete. We also believe (without blaming the Chinese in this case) that step two happened in 2008. We have ongoing proof that steps three and four have been underway for years. Now, how do we prevent step five? This is one of the most important questions we must be asking.