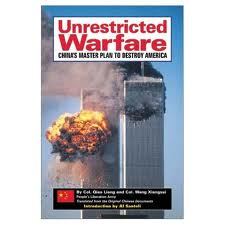 On this blog we have reported the reality of Unrestricted Warfare in various forms. We have shared how the People's Liberation Army (PLA) as far back as 1999 adopted a military approach using non-military means. The strategy they devised involved "new concept" weapons including "a man-made stock market crash," "computer virus invasions," and efforts to alter the value of currencies. Each of the approaches outlined more than a decade ago matches with what we know has been happening. Worse still, we believe that these approaches were adopted by al Qaeda and other terror groups. A great deal of evidence was presented in the New York Times best-selling book, Secret Weapon which we published in January. [To learn more, visit http://secretweapon.org.] In fact, when you read Unrestricted Warfare, you learn that the PLA authors even stated that "financial warfare has now officially come to war's center stage." They go on to say that when the history books are written in the 21st century warfare, "the section on financial warfare" will be the most important. Make no mistake. What they are saying here is that the Chinese plan is to fight an economic war first and foremost, including crashing stock markets or manipulating currencies as needed. [An English language translation of the Unrestricted Warfare book can be downloaded here: http://www.c4i.org/unrestricted.pdf.]

To be certain, there were numerous deniers who said that China would never hurt America because they need our markets and hold our debt. We have addressed such notions in previous posts as well (Which Chinese?, Which Chinese 2?). The simple answer is that while there are no doubt pro-America elements in China, there is also the PLA. Consider this 2005 quote from General Chi of the PLA that we shared on page 210 of Secret Weapon:

"It is indeed brutal to kill one or two hundred million Americans. But that is the only path that may serve a Chinese Century."

In that context, crashing a stock market seems tame by comparison.

The concern is that the PLA has its own resources and capabilities and remains hell-bent on assuring Chinese supremacy. And, we know for certain that Unrestricted Warfare is their playbook. And, we are seeing it play out on the world stage. It is in this context that news of a Dubai context becomes so troubling. It seems that Huawei Technologies has been bragging about their hidden abilities to hack our communications as reported in WND.com:

The claim was made at a conference held in Dubai in February by officials with the Chinese firm Huawei Technologies Co. Ltd., and left specialists who attended the seminar alarmed.

They told WND that's because while Huawei may consider the data "malicious," the act of intercepting and extracting data means the Chinese company also could steal sensitive information or even alter the function of computer systems where the company's products are installed.

Huawei, which is tied to the Chinese People's Liberation Army, displayed in a PowerPoint-type presentation that it had capabilities in "in-depth traffic analysis to enhance network control," which a source to WND who attended the conference said meant that it could intercept data and collect it.

There, sources report, Huawei readily admitted that it was undertaking such data interception and collection.

It is important to recall that our own Defense Department previously blocked Huawei earlier. Unfortunately, the current administration mysteriously killed the Pentagon program that identified the threat. This action was taken by the acting Undersecretary of Defense for Intelligence (USDI) as General Clapper was departing to become Director of National Intelligence (DNI) and just prior to Michael Vickers taking the post, first as acting USDI and later confirmed by the Senate. Seems like a pretty big decision to be made by a temporary placeholder. Here is the report from Bill Gertz's Inside the Ring:

The Pentagon's intelligence directorate is killing off one of its most strategically important mission areas: monitoring efforts by foreign governments to buy U.S. firms and technology, such as the multiple efforts by China's military-linked equipment company Huawei Technologies to buy into the U.S. high-technology sector.

Defense officials tell Inside the Ring that Thomas A. Ferguson, acting undersecretary of defense for intelligence (USDI) and a former Defense Intelligence Agency (DIA) space analyst, initiated the dismantling of the financial-threat intelligence monitoring.

According to the officials, Mr. Ferguson thinks the financial mission is not appropriate for the USDI office, even though the Treasury Department lacks the resources to do similar monitoring. Defense Secretary Robert M. Gates signed off on the change, the officials said. Mr. Ferguson and Pentagon spokesmen could not be reached for comment.

The officials said that the move will kill one of the Pentagon's most important and successful financial-threat monitoring programs, designed to track illicit and legal acquisition efforts by China and other foreign nations.

The USDI's threat-finance officials played a key role in revealing undercover Chinese technology activities. The data was provided to the Treasury-led Committee on Foreign Investment in the United States, which in 2008 blocked a proposed merger between Huawei and 3Com.

Last week, according to the Wall Street Journal, Sprint Nextel decided not to go ahead with an equipment deal with Huawei over reported national security worries that China would electronically penetrate U.S. cell-phone networks through the equipment.

"This will eliminate DoD's capability to uncover nefarious foreign financial and economic activities," said a person close to the issue who opposes the change. The intelligence mission focus, called threat finance, was carried out under a Pentagon directive after similar efforts by the DIA were found to be insufficient.

Edward T. Timperlake, a former director of technology security assessments at the Pentagon, said eliminating the USDI financial-threat monitoring is a mistake.

Mr. Timperlake said he hopes the new Republican-led House will look into the Pentagon policy change.

Keep in mind that the same reporter, Bill Gertz, said that Pentagon sources identified the incoming USDI as among those who blocked further study on Economic Warfare:

Regardless of the report's findings, U.S. officials and outside analysts said the Pentagon, the Treasury Department and U.S. intelligence agencies are not aggressively studying the threats to the United States posed by economic warfare and financial terrorism.

"Nobody wants to go there," one official said.

A copy of the report also was provided to the recently concluded Financial Crisis Inquiry Commission, but the commission also declined to address the possibility of economic warfare in its final report.

Officials, who spoke on the condition of anonymity, said senior Pentagon policymakers, including Michael Vickers, an assistant defense secretary in charge of special operations, blocked further study, saying the Pentagon was not the appropriate agency to assess economic warfare and financial terrorism risks.

Mr. Vickers declined to be interviewed but, through a spokesman, said he did not say economic warfare was not an area for the Pentagon to study, and that he did not block further study.

Mr. Vickers is awaiting Senate confirmation on his promotion to be undersecretary of defense for intelligence.

As a contrast, the Pentagon has appeared more than willing to provide information about the bin Laden Seal Team raid to Hollywood. We know this because of emails uncovered by Judicial Watch in a Freedom of Information Act release as reported by POLITICO:

Just weeks after Pentagon and Central Intelligence Agency officials warned publicly of the dangers posed by leaks about the raid that killed Osama bin Laden, top officials at both agencies and at the White House granted Hollywood filmmakers unusual access to those involved in planning the raid and some of the methods they used to do it, newly released government records show.

At a briefing in July 2011, Undersecretary of Defense for Intelligence Mike Vickers told filmmakers Mark Boal and Kathryn Bigelow that the leaders of the Special Operations Command couldn't speak to them for appearances' sake. However, Vickers said that the Pentagon would make available a Navy SEAL who was involved in planning the raid from its earliest stages . . .

Some Republicans have accused the Obama administration of having shared secret information with the movie team in order to paint President Barack Obama in a flattering light in a film that was originally scheduled to come out before the November election. The film, now called "Zero Dark Thirty," has since been delayed to Dec. 19.

The documents obtained by Judicial Watch show the White House and the CIA also rolled out the welcome mat for the filmmakers. Boal visited with acting CIA director Michael Morrell and had access to a mock-up at CIA headquarters that depicted the Abbottabad, Pakistan compound where the raid was carried out, the records indicate.

The bottom line is this. We know the Chinese playbook, but remain vulnerable.  PLA sponsored companies are even bragging to friends in the Middle East of their capabilities. And, the protection we had been provided regarding this problem from the Pentagon's Threat Finance Unit has been removed. It appears from press reports that monitoring threat finance and studying Economic Warfare is considered by some to be outside of the Pentagon's purpose. We believe otherwise and are thankful for those who understand that defending America from Economic Warfare must be made a priority.