Classic Distraction (from a Corrupt Media and Compromised Intelligence Community) 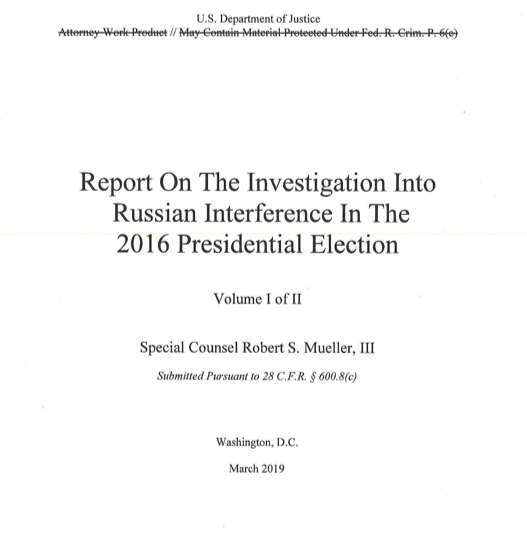 The Mueller report is out and there is absolutely no evidence of President Trump (or ANY American) colluding with the Russians over the 2016 election. There is ample evidence of Russian election interference attempts (even though President Obama once promised that no one could hack the election). There is plenty of evidence that President Trump was extraordinarily frustrated and angered with the unprecedented investigation and he apparently acted very frustrated with the process. But, as the Attorney General points out, the pressure he was under was truly unprecedented.

Here's the irony and really the misdirection. All of this started with Hillary Clinton's absolutely negligent (at best) handling of classified information. She was given "kid gloves" treatment by the FBI in their investigation. She did commit a crime and the evidence proved that to be the case (data dump proves it) even if Director Comey recommended against prosecution. The investigators freely gave immunity to key parties (Cheryl Mills and Huma Adedin) and literally allowed a cover-up of malfeasance. The FBI ignored that Clinton's emails were hacked, a fact that would have impacted the election if widely understood. The FBI then willingly destroyed the potential evidence as part of the immunity deal. Contrast that with the entrapment effort targeting Lt. General Flynn. He was led to believe that the FBI visit to the White House was an informal courtesy call for the new National Security Advisor. He was not warned and the FBI recommended against the need for a lawyer. The FBI notes suggested that the General was being forthright although charges were later brought.

Even after a very delicate investigation of the obvious malfeasance by former Secretary of State Clinton, the FBI and State Department were still unable to locate some 30,000 emails that had been "bleach bit" scrubbed from her server. We now know that those who maintained the server actually discussed that they were involved in a cover up. And the Secretary, now a presidential candidate, made lousy jokes about "wiping her server with a cloth." Everyone knew what had happened. The emails in question were "made to disappear."

The President pointed this out and (perhaps) jokingly said "maybe the Russians could get the emails." They did, as we now know. They were hacked and released to Wikileaks and other locations. As a result, we have evidence of Clinton's criminal negligence BECAUSE SHE PUT NATIONAL SECURITY at risk. The evidence here is crystal clear, in fact, despite a half-hearted investigation that was wrapped up before it began. We even have proof that the conclusion to not bring charges took place before the investigation was finished. And, of course, we have evidence of likely collusion between the Clinton camp and the Justice Department that is unethical at the least and quite possibly criminal. Does anyone really believe that Bill Clinton met on the tarmac in attempted secrecy with Attorney General Lynch to swap grandparent stories?

BUT THE POINT IS THIS:  Without the coverup of Clinton's negligence, there would have been no ability for the Russians to hack them. She was negligent and the Russians took advantage. That is the real story. She put our national security at risk. She may not have directly colluded with Russia in this but her criminal negligence certainly made us vulnerable.

Now, contrast the "fix is in" FBI kid-glove treatment of Clinton and her team (that was rushed but still found huge criminality even if no charges) with the Mueller investigation that took two years and cost over $30 million and found nothing. There was a crime at the heart of the Clinton mishandling of classified material and it likely goes much, much deeper than anything we have been told. The Clinton Foundation's receipt of money from foreign governments while she was Secretary of State and the State Department was ruling on matters before them? The Justice Department forbade such an investigation. The Uranium One deal? Covered up. Skolkova? Covered up. Scandal after scandal all glossed over. There was and is "there, there."

In the case of Trump/Russian collusion, it was based in large part on a dossier paid for by the Clinton's campaign and produced by a source already deemed unreliable. It has since then been thoroughly debunked. But this "dirty tricks" effort was used to justify an unprecedented spying effort by our own government against a major presidential campaign. And, we have proof positive that the lead investigators (Peter Strzok and Lisa Page) were biased against the subject of the investigation (and later removed because the bias was so obvious when leaked), were having an affair, and referenced having an "insurance policy" should Donald Trump win the election. So the same team that exonerated an obviously guilty Clinton was privately clear that they were prepared to take down her opponent should he win.

All of this was coming out as the Mueller investigation was ramping up. Before President Trump even took office, there were calls for his impeachment "because he colluded with Russia to win." But the President knew better. And he had to watch a literal witch hunt go after his inner circle. He also had to watch the mainstream media go after him 24/7 with false charges and innuendo. And this is a President who is a fighter.

So, in this context, is there any wonder whatsoever that the President would come out swinging? It's not paranoia if they are really out to get you. Of course he wanted the investigation to stop. It was started under phony pretenses and he knew it. Of course he would call for any means to stop it so he could get on with governing. Did he act improperly? Was there obstruction of justice? The Independent Counsel did not make a conclusion one way or the other. But ask yourself this? Was there obstruction when the Clinton team wiped her server when it was under subpoena? When comparing the worst of what you read in the Mueller report with the facts of the Clinton case, there is no comparison.

Based on the Mueller report, the President did want to stop what he believed was an unfounded and unfair investigation. But, according to left-leaning civil rights attorney Alan Dershowitz, he did not obstruct justice. And, despite his desire to stop the investigation, his administration cooperated in full even though the President could have truly interfered.

The main point is this:  All of this was a magician's distraction. The media and intelligence agency are trying to get us to look at the idea of impeachment over "trumped-up" obstruction charges to keep us from seeing the real collusion between  a politicized intelligence community and the Democrat agenda. Any truly objective observer will see this truth.

We have long discussed the risks of politicizing the Intelligence Community (IC). No one wanted to look into the idea that foreign influences attempted to crash our stock market and collapse our economy just before the 2008 election. The IC was literally told to "stand down" as I was reporting the truth to the Pentagon in 2009. I was given a message from the future Under-Secretary of Defense for Intelligence that my research would be classified and I would be jailed if I discussed it publicly. If it weren't for the powerful assistance from a former Director of the CIA and three sitting Senators, I'd likely be in jail today.

We know that Senator Ted Kennedy's campaign literally tried to collude with the KGB and Soviet Union to win the Democrat nomination and asked for their help to beat President Reagan in 1984. This was verified in the Soviet archives after the Cold War ended. We also know that the Clinton campaign accepted large amounts of illegal Chinese cash in the 1996 campaign. They were caught red-handed. Yet, there was no witch hunt in either case. And, the Clintons went on to grant MFN (most-favored nation) status to China that gave rise to many of the issues we have today.

Does anyone doubt that the media is biased? Study after study proves that point. We even have evidence that there was collusion with candidate Clinton in the presidential debates.

Does anyone doubt that parts of the Intelligence Community are biased? After Peter Strzok and Lisa Page, along with the FISA approved spying on the Trump team, it is hard to imagine otherwise. Keep in mind that President Obama was crystal clear in sharing that our election COULD NOT be hacked back when he thought Clinton was a "shoe-in." Only after Clinton lost and they thought they could pin a collusion charge on President Trump did anyone take foreign interference seriously.

Now, however, we also have a detailed analysis showing that bias as reported by Bill Gertz in the Washington Free Beacon. Bill is a friend (who also broke my story) and probably the best reporter on military/intelligence matters in the world today. Here is what Bill reported on April 18:

The CIA and other U.S. intelligence agencies have become bastions of political liberals and the pro-Democratic Party views of intelligence personnel have increased under President Donald Trump, according to a journal article by a former CIA analyst.

The institutional bias outlined in a lengthy article in the quarterly International Journal of Intelligence and Counterintelligence risks undermining the role of intelligence in support of government leaders charged with making policy decisions . . .

"The attacks on Trump were unprecedented for intelligence officers in their substance, tone, and volume," he stated. "Critics went far beyond trying to correct Trump's misstatements about U.S. intelligence; they attacked him as a human being."

Gentry, currently a professor at Georgetown and Columbia Universities, provides a detailed analysis of whether the 16-agency U.S. intelligence community and the CIA in particular have become institutional partisans supporting the Democratic Party.

When you put this all together, the outrage and calls for impeachment are obviously manufactured and partisan. Sure President Trump got upset with a clear witch hunt. But the focus on him is a misdirection worthy of Houdini. The real crime was Clinton's and the real cover up belongs to Comey, elements in the FBI and IC, and the media. The Trump Administration Justice Department likely will not be distracted. We hope they don't become politically biased the other direction. But there is plenty of "there there" in collusion and malfeasance that must be rooted out and corrected. Our nation's future depends on it.

Take a look at my current discussion of the Mueller report with former six-term Congressman Bob McEwen. Bob was a key member of the House Intelligence Committee and is extremely well-connected in Washington