Both Barclays and Dark Pools were significant players in the 2008 market crash. High-Frequency Trading (or HFT) was the culprit blamed in the 2010 "flash crash." All three reentered the headlines together recently with accusations of HFT fraud perpetrated by Barclays via Dark Pools. Don't let the "shell game" of information fool you. Instead of viewing each separately, look for the common threads. When you drive to the heart of these "scandals" you come to an irrefutable conclusion. Our financial markets have been subjected to potentially systemic manipulation and remain vulnerable to ongoing financial warfare.

Barclays is not new to this equation and we have covered the British behemoth bank's activity before. Barclays was in the middle of the LIBOR scandal. They have been seriously fined in connection to gold-price rigging. They were tied to the energy price run-up of 2008 that we view as "Phase One" of a three-phased economic attack. They were present at the failure of Lehman Brothers, even profiting in the aftermath. They were tied to Qatar's Sovereign Wealth Fund that in turn was directly connected to noted radical Sheik Yusuf al-Qaradawi, a Senior Muslim Brotherhood scholar who had authority over Shariah Compliance at the fund and is so radical that Egypt issued orders for his arrest. Much of this was covered in Secret Weapon; How Economic Terrorism Brought Down the U.S. Stock Market and Why It Can Happen Again (pages 40, 85, 97-98, 126, 130, 144, 157-58, 173).

Dark Pools (and Dark Markets) were also covered extensively in Secret Weapon (pages 3, 87-94, 98, 100, 127, 130, 138, 151, 160, 165, 220) as was High-Frequency Trading (pages 18, 94-96, 127, 166, 200-01). We have also written about these critical issues in this Blog (and elsewhere). Both can separately be used to manipulate markets. Combined, they can create an almost untraceable weapon capable of destroying an entire economy. Trading in dark pools happens virtually without regulation or oversight. High-frequency trading happens in an instant and can potentially be used by terrorists to collapse share prices according to expert testimony quietly provided in a Congressional inquiry.

The most recent revelation brings together additional puzzle pieces useful for examining the nature and causes of the 2008 collapse as well as identifying the weapons potentially being assembled to destroy America. First, there is the recent recognition that even though dark pools just might be a problem, they are taking an increasing share of trading activity. When Secret Weapon was written in 2009, it was estimated that about 12% of all trading was undertaken in dark pools. That number is now over 40% according to recent press reports:

The rise of off-exchange trading in the U.S. stock market continues unabated even as regulators question the wisdom of allowing the shift to continue.

Shares changing hands in private venues such as dark pools accounted for 40.4 percent of total share volume on June 10, according to data compiled by Bloomberg. That's the most since 41.7 percent took place off-exchange on June 22, 2012. The three biggest exchange companies each matched about 20 percent of trading on June 10.

The high came after Securities and Exchange Chair Mary Jo White last week voiced concerns about the level of trading taking place on venues where bids and offers are kept private, masking the true depth of demand for shares… [To CONTINUE reading at Bloomberg…]

With the growth of dark pools also comes increasing concern about the impact on the market as noted in the following excerpts from a recent Reuter's story:

Some former regulators and academics say so much trading is now happening away from exchanges that publicly quoted prices for stocks on exchanges may no longer properly reflect where the market is. And this problem could cost investors far more money than any shenanigans related to high frequency trading…

Those whose trade never makes it to an exchange can benefit as the broker avoids paying an exchange trading fee, taking cost out of the process. Investors with large orders can also more easily disguise what they are doing, reducing the danger that others will hear what they are doing and take advantage of them.

But the rise of "off-exchange trading" is terrible for the broader market because it reduces price transparency a lot, critics of the system say. The problem is these venues price their transactions off of the published prices on the exchanges – and if those prices lack integrity then "dark pool" pricing will itself be skewed…

This trend is "a real concern," John Ramsay, former head of the U.S. Securities and Exchange Commission's (SEC) Trading and Markets division, said on the sidelines of a conference in February. "We have academic data now that suggests that, yes, in fact there is a point beyond which the level of dark trading for particular securities can really erode market quality." [To Read the article at Reuter's….]

This raises two critical issues. First dark pools enable hidden orders, allowing virtual anonymity for traders. That's not necessarily a problem if everyone trading has a profit motivation. But it can be deadly serious in the case of financial terrorism. Just imagine what could happen if nefarious characters had access. The second issue is that dark pools can degrade the abilities of markets to determine fair prices. This is a problem regardless but is especially serious in the case of financial terrorism. Essentially, dark markets offer the ability to manipulate prices almost without detection. Of course, there are serious concerns about High-Frequency Trading as well. The ability to move billions of dollars in orders in less than an instant poses serious risks in and of itself.

The recent revelation, however, is that Barclays is accused of using dark markets to manipulate high-frequency traders to its benefit and the market's detriment. Here's a link to a Bloomberg article that explains the initial concerns: 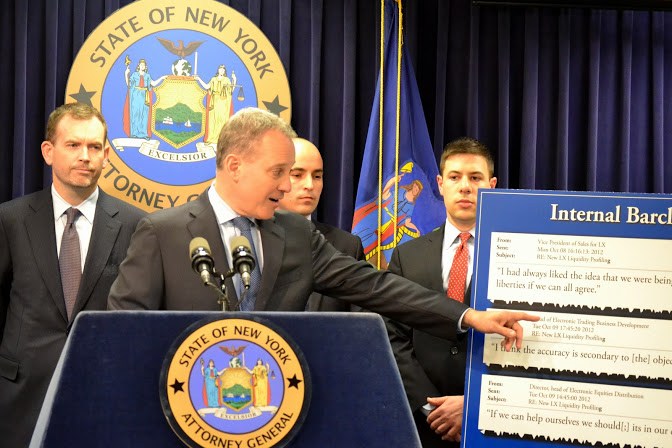 Basically, Barclays has been accused of routing orders to their own dark pool, perhaps the second largest in the world, to take advantage and profit from the trading. While promising protection from predatory activity, the charges essentially say they acted as predators. A good summary of the charges was provided in a CNBC article:

The suit is surprising, because it does not make the usual generic complaints about dark pools: That they are opaque, that they provide perverse incentives for trading.

The suit alleges very specific instances of outright fraud by Barclays Equities Electronic Trading Division, which operated the dark pool, and that they committed these frauds as part of an effort to become the largest dark pool in the U.S., which was a principal goal of that division.

Specifically, Schneiderman is alleging that Barclays:

It's especially shocking that Barclays gave information on its dark pool to high frequency traders, including info on the identity and trading activity of other traders.The whole point of a dark pool is complete confidentiality! Talk about a violation of trust!

Barclays was supposed to be protecting participants in its pool from perceived predatory behavior, but Schneiderman says Barclays has never prohibited a single firm from participating in its dark pool, no matter how toxic or predatory its activity was determined to be. [Emphasis added. To Read the CNBC article…]

That last sentence is especially troubling. When you consider the accusation that Barclays will deal with anyone (made by the New York Attorney General) in context with the involvement of potentially shady characters and a history of rules breaking, the seriousness becomes obvious. There are a lot of puzzle pieces in regard to market manipulation, what happened in the last crash, and future systemic risks. But the picture produced continues to get more interesting and even more frightening.