Defending the First Liberty of the First Amendment 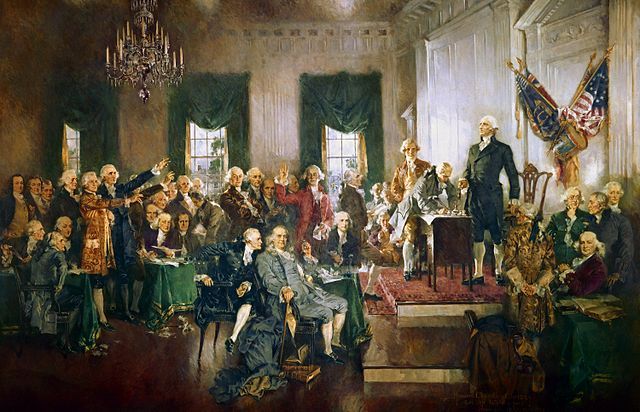 Congress shall make no law respecting an establishment of religion, or prohibiting the free exercise thereof; or abridging the freedom of speech, or of the press; or the right of the people peaceably to assemble, and to petition the Government for a redress of grievances.

Lots of people focus on what is known as the establishment clause, which prohibits the Federal Government from establishing a national religion. This is important because in a free society, no one should be coerced by the force of government to believe a certain way. Unfortunately, too often the government takes this to the extreme and attempts to drive faith out of any aspect of public life. That is clearly NOT what the Founders intended. And proof of that comes in the very next phrase:  "or prohibiting the free exercise thereof." This suggest that the government should not be hostile to religious expression. The fact is that the Founders did not want the government to be so large that this would ever be an issue. The Constitution was written to limit the Federal Government. Unfortunately, against their better plans, government compromises about 40% of our economy according to some estimates.

It is certain that the Founders never intended to exclude religion from 40% of our lives. And they certainly did not intend for the government to be hostile to religious expression. Thus, the idea of preventing Christmas parties, menorahs, or crosses was never a part of the original intent. And, it should not be a problem today. Yet, a recent Supreme Court case held the fate of a 100-year old World War One veteran's monument. There were some arguing that the Bladensburg Peace Cross, erected to honor the memory of fallen soldiers, had to be removed from public view. One judge suggested "cutting the arms of the cross" so, he said, no one would be offended. [Wow! I'd be offended and so would millions of other Christians.]

All of this argument is based on the establishment clause of the First Amendment. Past rulings that prohibit religious symbols have followed a very flawed legal theory known as the Lemon Test. And what the Lemon Test allowed was an economic war on faith. The Lemon Test has been used repeatedly over the past 50 years against religion:

Since 1971 – for almost half a century – courts have used the "Lemon," or "endorsement" test, to determine whether the government has endorsed or established a religion by allowing public displays that may have some religious imagery. And that test is precisely what's put many of our nation's war memorials in the cross-hairs and under impending threat of desecration or destruction.

Why exactly is this test so bad?

In short, the Lemon test essentially gives the upper hand to feelings, rather than solid legal argument.

That kind of legal doctrine is what prompts people to flood the system with lawsuits simply because a monument or display personally offends someone's "feelings." Of course, what's not taken into consideration is the heartbreak of the people who built the memorials in the first place – like the Gold Star Mothers and The American Legion, who built the Bladensburg Memorial in honor of their fallen sons and brethren.

Beyond that, the Lemon test has also caused so much confusion that government officials – especially local officials – are left unsure about what the law is when it comes to displays with religious imagery. So, by default, the government ends up shutting down displays with religious imagery altogether – the kind of thing that the Founders would be appalled by.

The truth is:  If we let Lemon stand and adopted Socialism, government would be in 100% of the economy and God would be excluded from our daily lives.

This is exactly opposite of the Founder's intentions. In fact, the purpose of going to America in the first place was to find and found a place where religious freedom was guaranteed. But in recent years, the State has become hostile to religion. Why? Because a growing government finds it hard to accept a power greater than itself. The State must be "god." This isn't anything new. It was true with Communist Russia. And it was true in the time of Daniel, something like 2,600 years ago.

7 All the presidents of the kingdom, the governors, and the princes, the counsellors, and the captains, have consulted together to establish a royal statute, and to make a firm decree, that whosoever shall ask a petition of any God or man for thirty days, save of thee, O king, he shall be cast into the den of lions. 8 Now, O king, establish the decree, and sign the writing, that it be not changed, according to the law of the Medes and Persians, which altereth not. 9 Wherefore king Darius signed the writing and the decree.

10 Now when Daniel knew that the writing was signed, he went into his house; and his windows being open in his chamber toward Jerusalem, he kneeled upon his knees three times a day, and prayed, and gave thanks before his God, as he did aforetime. 11 Then these men assembled, and found Daniel praying and making supplication before his God. 12 Then they came near, and spake before the king concerning the king's decree; Hast thou not signed a decree, that every man that shall ask a petition of any God or man within thirty days, save of thee, O king, shall be cast into the den of lions? The king answered and said, The thing is true, according to the law of the Medes and Persians, which altereth not.

Notice how the Government demanded the highest allegiance? The good news, of course, is that Daniel violated the King's law but was rescued from the lions by God Almighty!

19 Then the king arose very early in the morning, and went in haste unto the den of lions. 20 And when he came to the den, he cried with a lamentable voice unto Daniel: and the king spake and said to Daniel, O Daniel, servant of the living God, is thy God, whom thou servest continually, able to deliver thee from the lions? 21 Then said Daniel unto the king, O king, live for ever. 22 My God hath sent his angel, and hath shut the lions' mouths, that they have not hurt me: forasmuch as before him innocency was found in me; and also before thee, O king, have I done no hurt.

23 Then was the king exceedingly glad for him, and commanded that they should take Daniel up out of the den. So Daniel was taken up out of the den, and no manner of hurt was found upon him, because he believed in his God. 24 And the king commanded, and they brought those men which had accused Daniel, and they cast them into the den of lions, them, their children, and their wives; and the lions had the mastery of them, and brake all their bones in pieces or ever they came at the bottom of the den. 25 Then king Darius wrote unto all people, nations, and languages, that dwell in all the earth; Peace be multiplied unto you. 26 I make a decree, That in every dominion of my kingdom men tremble and fear before the God of Daniel: for he is the living God, and stedfast for ever, and his kingdom that which shall not be destroyed, and his dominion shall be even unto the end. 27 He delivereth and rescueth, and he worketh signs and wonders in heaven and in earth, who hath delivered Daniel from the power of the lions.

It was true 2,600 years ago and it's true today. Secular governments become hostile to God. Fortunately, we have a few Daniels willing to stand today.

The second phrase of the First Amendment essentially says that our government should in no wise prevent the free exercise of religion. That is a foundational truth too often ignored by modern politicians. In fact, it is not only ignored, but regularly violated. One of the Daniels willing to stand against the force of government is Coach Joe Kennedy. He was quietly exercising his religion by privately praying after football games. The government slapped him down and fired him. They said he was not allowed to be seen when he prayed. Sure sounds like Daniel. Read about his case to understand how this is economic warfare. He was told that if he exercised his religious beliefs that he would be fired and lose his income.

Fortunately, another group of Daniels can be found at First Liberty Institute (full disclosure, I've been an advisory board member there for almost 20 years). First Liberty won a big victory at the Supreme Court last week that pushed Lemon to the side in favor of religious liberty! See what Kelly Shackelford said about the Establishment Clause in Episode 41 of the Economic War Room. Here's a clip.

What is important to understand is that this is an Economic War being waged against our culture and heritage. There are some who believe it no longer acceptable to express faith in the marketplace. This has certainly been the case for Christian cake bakers such as Aaron and Melissa Klein. The good news is that First Liberty also got a victory for the Kleins at the Supreme Court in a recently announced judgment! They had been fined $135,000; an amount sufficient to put them out of business if upheld. but the Supreme Court rejected the fine. This one battle in an ongoing economic war against people of faith was won!

It's not just an attack on Christians. There are also many examples where government has been marshalled to prevent the practice of Judaism. There are cases targeting Jews such as when the government was petitioned by animal rights advocates to prevent a tradition Yom Kippur ceremony. Never mind that there was a KFC down the street. These activists wanted to prevent a ceremony central to the faith of Jews for thousands of years. In another sad example, the city of Dallas has tried to shut down an Orthodox synagogue due to inadequate parking despite the fact that Orthodox Jews only walk to Sabbath services. In that case, if the ruling were to stand, the congregation would have been forced to sell their homes and move out of the neighborhood. If that is not economic warfare, it is hard to imagine what is. Fortunately, First Liberty has been there to stand!

There is another great piece of news from First Liberty. They have been instrumental in placing quality, freedom loving judges on the bench. In fact, one of their attorneys was nominated by President Trump and approved by the Senate just last week. This is a part of the reform of the judiciary that is taking us back to the original intent of the Founders.

Overall, First Liberty scored three major wins in June, two at the Supreme Court and one with a new Federal Judge. Here is another clip where Kelly Shackelford explains the great progress overall that is being made.

All of this is the subject of Episode 40 of Economic War Room with Kevin Freeman on BlazeTV. If you are a BlazeTV subscriber, be certain to watch Episode 40 (June Court Opinion: More Religious Freedom Than Ever in USA?). If you are not yet a subscriber, get a FREE TRIAL at EconomicWarRoom.com. You should also download the FREE Economic Battle Plan™ that goes with this episode.

The bottom line is this:  There is an Economic War underway targeting our Judeo-Christian heritage. The secular state has a need to replace God with their own authority. Socialism really only works if the State is considered the highest authority. Our solution is to "weaponize your money" and stand for freedom. We have to fight this battle if we want to pass along freedom to our children and our children's children. And we must start with the First Amendment.