Did We Win the Oil War? Maybe, But There are Still Risks

The International Monetary Fund (IMF) is now warning Saudi Arabia that the Kingdom will be broke in five years. Some evidence for this can be seen in the Chart of Saudi Foreign Currency Reserves shown at ZeroHedge. 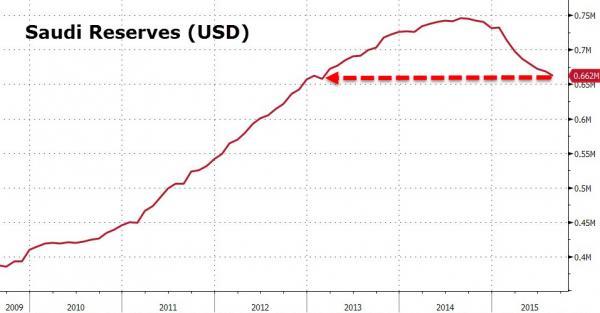 The cause behind the dire outlook? The oil war started with OPEC's refusal last year to defend the price of oil and focus instead on market share. The result was a swift decline in prices per barrel from well over $100 to as low as the $30s before seemingly stabilizing around $50. Some believe that the OPEC efforts were aimed at Russia, Iran, and Syria. Others see this as a direct assault on the American energy renaissance that is about to get worse.

We discussed the war before it began, more than two years ago:

We then explained how the price drop was proof of the economic war in a couple of posts last December:

There are more than a few things we must note amidst the turmoil. First, the Saudis likely underestimated American ingenuity and resourcefulness. The shale boom has barely receded despite lower oil prices. Yes, rig counts are down but production remains near all-time levels. That's the good news.

Second, if the target was Russia/Iran/Syria, the Saudis have been undermined by Putin's resilience and Iran's $150 billion "gift" from the United States. Putin has strong domestic ratings and has been successful in refocusing attention to his assault in Syria, presumably against ISIS. The Iranians feel vindicated by the nuclear agreement with the Obama administration and the financial gift they will receive. And, Russia may be looking to team with, rather than against OPEC. Strike two for Saudi Arabia?

Third, the stress has put the Saudi King at risk. There were already rumblings regarding leadership. Just recently, however, the rhetoric seems to be matched with action. That's because some believe that Saudi Arabia faces an "existential crisis" in two years or less on the current course. Take a look at this For the Record video "short" in which I made this point:

‘For the Record': How Cheap Oil Could Lead to More Unrest in the Middle East from TheBlaze Videos on Vimeo.

So where does that leave us?

For one thing, we can be pleased that our domestic shale industry has survived. But, is there lasting damage? Only time will tell because the real damage isn't to know-how or equipment. The real damage is to capital formation. Will funding for oil development dry up? Will production curves collapse as shale wells deplete? Some are worried but others not. Perhaps we can start and stop the industry as conditions warrant.

The second concern is the destabilization of the Middle East. ISIS has been far more successful than anyone expected. Throw in risks to the House of Saud and things could turn really bad. On the other hand, it is Russia who looks stronger by filling a vacuum seemingly left by unsuccessful American policy. Russia has clearly enhanced her position vis-a-vis the United States. The Saudis have actually increased ties to Russia as have the Egyptians. It seems that Arabs are looking for help anywhere other than the United States. There are rumblings that even Israel has begun to view Putin as a potentially more reliable ally than President Obama. Russia has acted in Syria while we look weak.

A third concern is that the emerging markets are being devastated by collapsing commodity prices, led by oil. Once "bright star" economies have been crushed leading to potential global instability.

The fourth and potentially greatest risk is that low oil prices have had the unintended consequence of seriously undermining the petrodollar. This would be disturbing enough on a stand-alone basis. But it comes at a time when China has been dumping their American Treasury Bonds as well. Some view the Chinese drawdown of holdings to be just a normal consequence of their slowing economy. They point to a need to defend the Yuan. Others, however, noticed that in August, the Chinese attempted to offer an alternative reserve currency and the IMF said "not yet." Since then, however the Chinese have made strides in gaining IMF approval. As China has sold American dollar-denominated bonds, they have added to gold holdings. This suggests that there is more at play than they needed the cash. We believe the Chinese approach is, at least in part, linked to a long-term strategy of displacing dollar hegemony. Certainly the Russians have been pushing that direction.

The Saudis have had to sell as well but so far, we've seen few negative repercussions. But we should not take comfort just yet. Global financial markets can be funny things. They can go on in a single direction for quite a while seemingly content only to suddenly begin to worry about something with massive reversals. Greece wasn't a problem until it was. The U.S. housing bubble seemed to be "no big deal" in late 2007 when the Dow Jones Industrial Average was hitting all-time record highs. Then, a few Wall Street bank failures and the market suffered the swiftest and most severe drop since the great depression. In about eighteen months the Dow fell from 14,100 to 6,500. We saw a similar collapse at the start of this millennia when the tech bubble burst and the world suddenly realized that "clicks" on websites didn't deserve multi-billion dollar valuations without any economic basis in reality.

Without foreign buying from China, Saudi Arabia, Russia, and the emerging markets, where will we sell American debt? Consider that we've just wiped out many of our best customers. The collapse in oil prices may doom the petrodollar recycling effort and diminish the world's need or appetite for American dollars. If you can buy oil in other currencies, you don't have to own Treasury bonds. If you can buy cheap goods from China in other currencies, the need for dollars is even less. 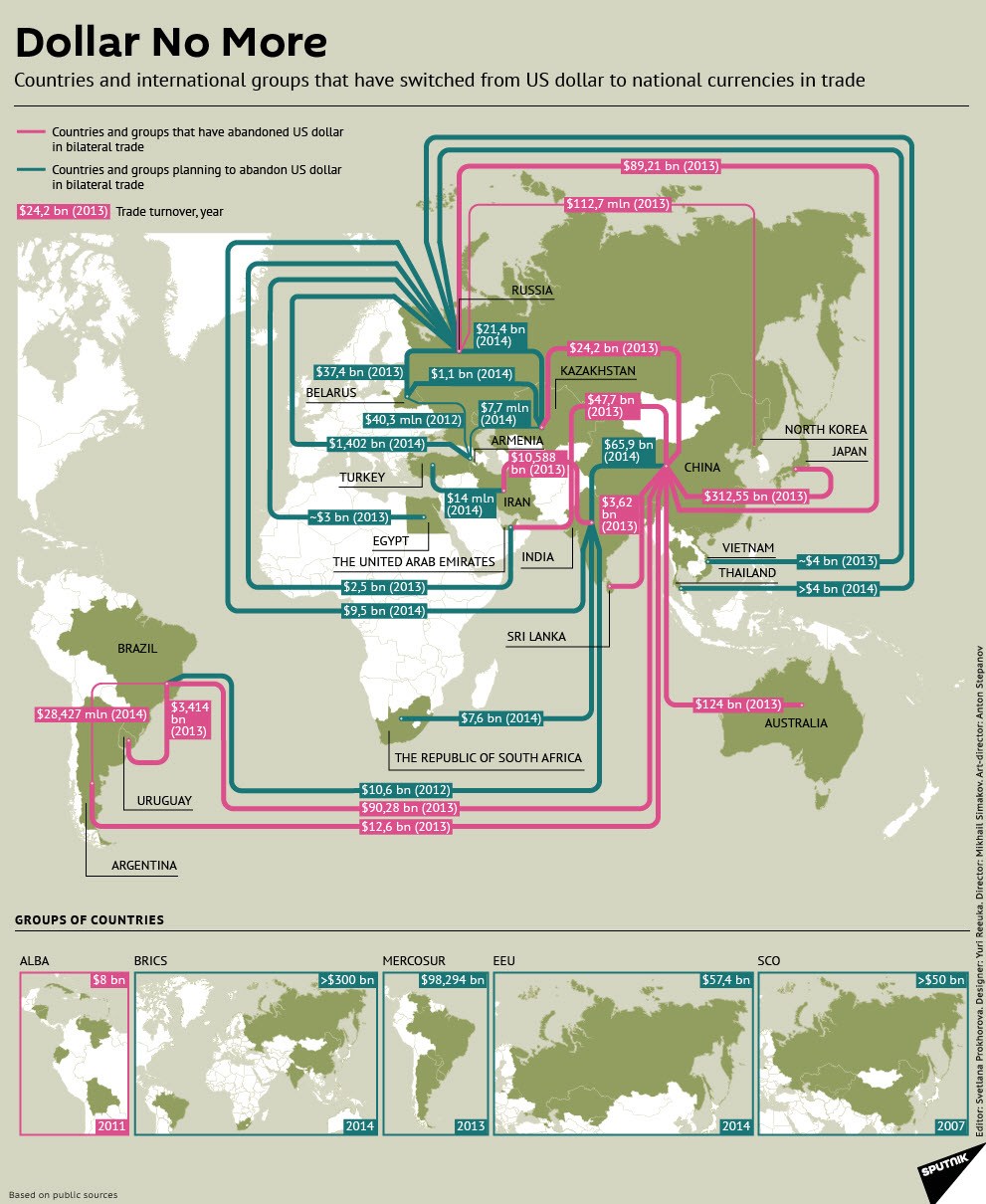 Already, according to CNN, we are experiencing the greatest American debt selloff in 15 years and it seems to be only getting started. 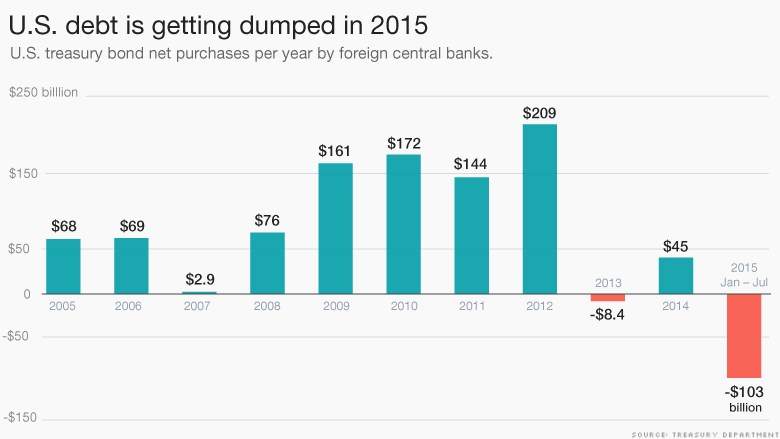 Take a look at the list provided by our Treasury Department of who owns our foreign debt (and realize that Belgium is a proxy for China). 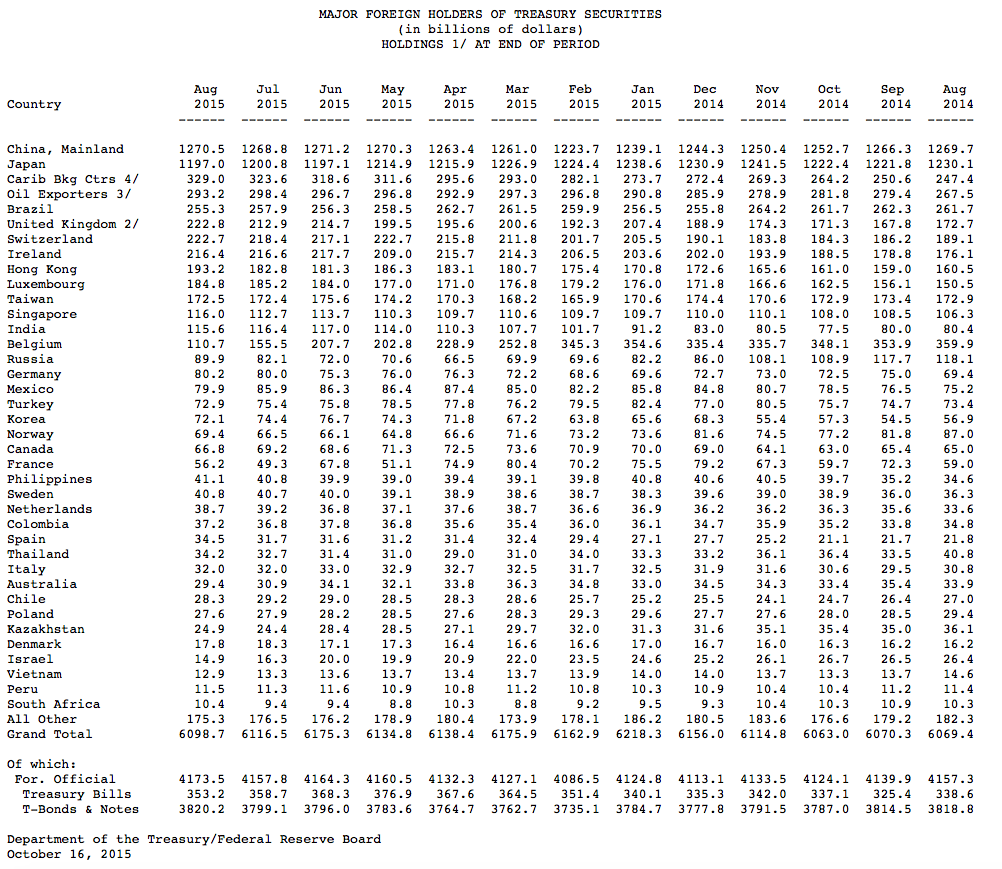 What happens if China/Belgium, the Oil Exporters, Russia, and emerging markets not only stop buying but start selling? The Federal Reserve, inter-government agencies, American banks, and Hedge Funds (represented in part by Caribbean banking centers) have taken up the slack so far but that can't continue forever. 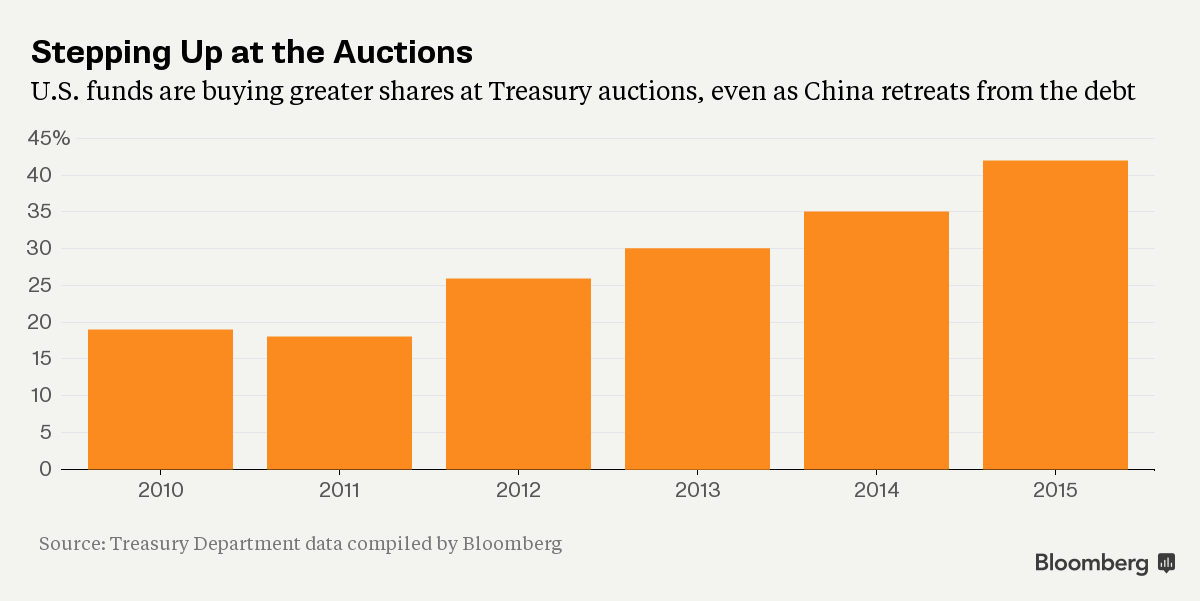 As you can see in the Bloomberg chart, American purchases of US Treasury debt have more than doubled as a percentage of debt offered over the past few years from under 20% to over 40% and climbing. Taken to the extreme, however, buying our own debt would be tantamount to sticking ourselves with a bunch of IOUs reminiscent of "Dumb and Dumber."

Self-financed debt can be reasonable for nations with a large balance of payments surplus and a robust economy. But a nation with growing debt, a weak recovery, and a balance of payments deficit? That is a genuine problem. On average, the U.S. has been bleeding about $400 billion in international transactions each year, far and away the largest deficit of any nation in the world according to World Bank statistics.

Add in a budget battle, debt ceiling, and potential government shutdown and you have a looming catastrophe. Last time we had a debt showdown, the Chinese officially determined that the world must "de-Americanize" and that the dollar must be replaced as the primary global reserve currency. The Russians have waited a long time for this. This go-round has the potential of igniting a serious upheaval.

The conclusion? It may be too soon to declare victory in the oil war as there are clearly unanticipated consequences still to have impact. But, all of this does point to the solutions we outlined in Game Plan: How to Protect Yourself from the Coming Cyber-Economic Attack. We must take steps to protect our domestic energy producing capacity. It is a matter of national security. We need to strengthen our domestic economy. That will require sensible regulation and a reduction in onerous controls. We need a workable tax code. We need to reduce deficit spending. We need to repatriate corporate earnings held overseas. These were outlined in Chapter Twelve (titled "There is Hope"). And the simple plan detailed there would catapult America into a position of strength. The chapter also implores America to return to her godly heritage. Whether we know it or not, our allies and adversaries alike are decrying the American moral collapse.

It will be interesting to watch the next Republican Presidential debate to be focused on the economy. Perhaps one or more of the candidates will take a position on these critical economic matters. We will watch closely to see. Our future may well hang in the balance.