Don't Worry About a Coming Trade War; We're Already in One

Doesn't everyone believe in free trade? That is a serious question and anyone who disagrees with the concept of universal free trade at all times and in all circumstances is scorned.

The problem is that most economic types and politicians in the West make two very wrong assumptions.

First, they assume that the world is one giant marketplace (while many of our adversaries view it as a battle space). What I mean by that is that big economic players in the West view themselves as citizens of the world and make fun of any who are nationalists. Who cares if we devastate American workers as long as we get products more cheaply? And doesn't it all even out according to economic theory with all parties benefiting from free trade in the long run? We export intellectual capital, entertainment, and the like and we can buy all our manufactured goods from China. The Chinese should love this because our movies are better and their electronics are cheaper, right?

The problem is that the theory requires that all parties play fair. It also ignores the impact of individual economic dislocations. So, am I suggesting we should be protectionist, clamping down on imports? Absolutely not. Free trade is very good as long as it is fair as our friend Ken Blackwell explains. And, we should be eyes wide open, aware of the risks and pitfalls and ready to address them. Some nations want to rig the system in their favor.

The second wrong assumption made by many in the West is the myth of American/Western Civilization permanence. Essentially, these economic theoreticians sort of assume that the American dollar will always be the currency of the world, that OUR debt will never become a problem, that everyone (including China and Russia) is so dependent on our markets that they would never do us harm. Of course, this is naive at best and really downright stupid. There are plenty of nations and non-state actors who would relish the demise of America and the West.

When you put those two false assumptions together, you create circumstances in which adversarial parties can take advantage and threaten our security under the guise of commercial transactions.

We just gave the example of China selling us their manufactured goods and we sell them intellectual property (IP) and entertainment. The problem is that China actually steals our IP on a regular basis. I was at a Chinese OEM (original equipment manufacturer) in the late 1990s. The company had contracts with all the big television brands to build flat-screen TVs. they were hoping that my firm would invest in them. They shared openly that they were stealing all the design secrets from the major brands to build their own brand. We have written on Chinese IP theft multiple times. It is pure economic warfare.

We have also shared how Alibaba raised $25 billion in our capital markets (in an initial public offering or IPO) and then began to use our money to buy up chunks of Silicon Valley.

Of course, the Chinese want Americans to buy their manufactured goods without hesitation. The drone industry is one area where they have dominated.    The only problem is that the Army has claimed to have uncovered serious cyber vulnerabilities in the drones from the dominant Chinese supplier and had to halt all shipments and stop all use. This one Chinese supplier (DJI) has about 70% of the global drone market.

Sadly, there are some Americans who are willing to violate trade restrictions to make a buck, even if it puts our security at risk. Last week, a Plano Texas man pled guilty to illegally selling radiation protected microchips to China and Russia. These are used in satellites and missiles. A few years ago, several major banks were caught money laundering for Iran. Internal memos from one of the British banks seemed resentful that there were any American restrictions whatsoever. The French company Renault just announced a huge deal to produce cars for Iran despite new sanctions just now put in place. In each case, the parties were more focused on the money than the security of the West while China has been looking out for her own national interests. Is that surprising? We wrote about it as a co-author in the book Warning Order published by the Center for Security Policy. 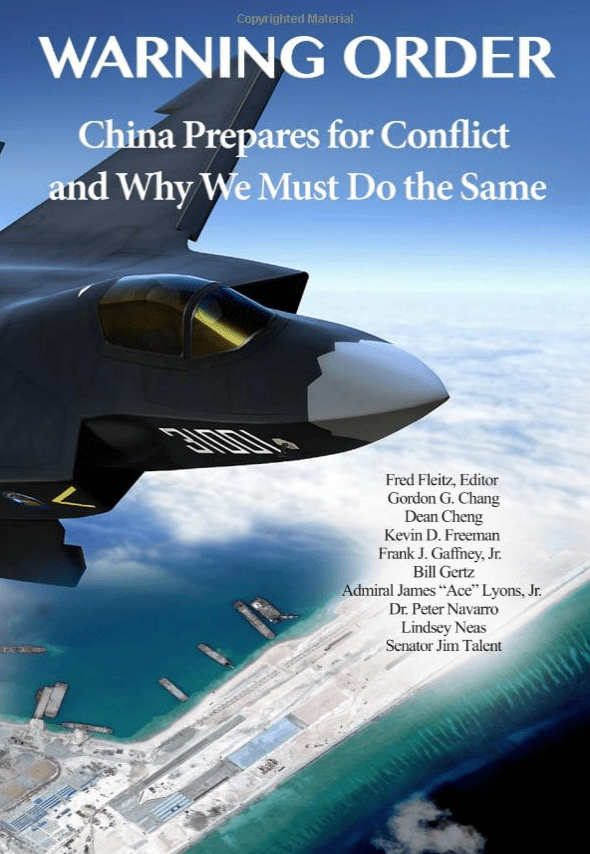 President Trump and his advisors appear to understand this (one of whom, Dr. Peter Navarro, co-authored Warning Order). President Trump is being attacked, however, for wanting to start a trade war. The free trade crowd in America has hurled that charge. The Russians have as well. The fact is that he is not starting a trade war. He is merely recognizing the one that has already been underway. And, it is much more than just a trade war. It is a full-scale global economic war. Kudos to President Trump and those among his advisers who understand this. If we react properly, we can make everyone start playing nice and get back to the global benefits of FAIR free trade.