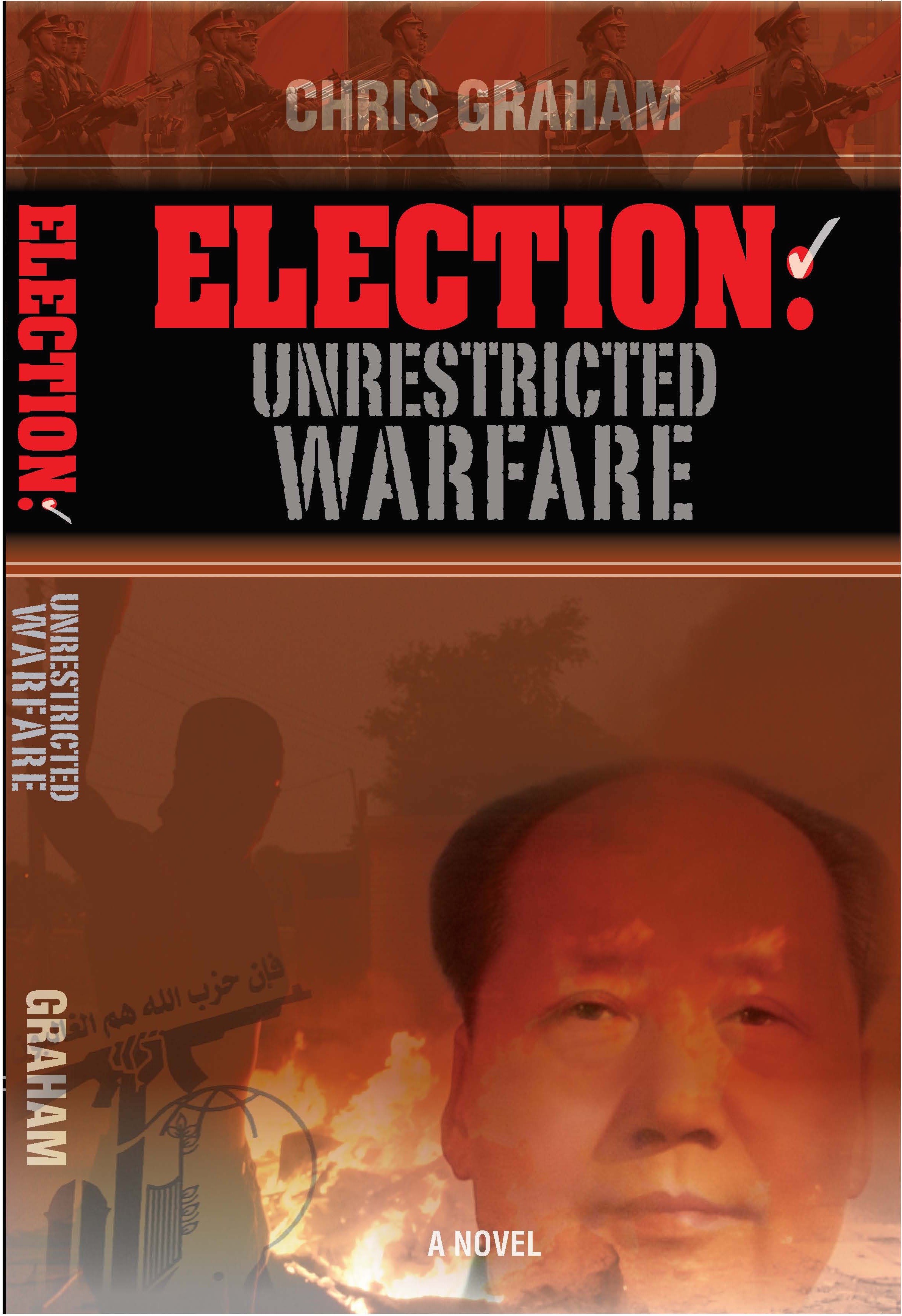 There's a new novel out by my colleague and friend Chris Graham. It combines two of the topics we regularly discuss on this Blog–The Chinese version of Unrestricted Warfare and the politics of elections. I was privileged to be among the initial reviewers and can heartily endorse the book.

From the Amazon writeup:

After the Iranian revolution, the new Islamic Republic of Iran instigates a series of terrorist attacks around the world. For what purpose? Col. Qiao Liang and Col. Wang Xiangsui unveil a modernized version of SunTzu's tactics for China: Unrestricted Warfare. How could this be unfolding in current events? A corruptible American President approaches re-election in 2016. Who is trying to manipulate her?

"Chris Graham…[is] one of the best, brightest and bravest Marines I've ever known and now he's proven himself to be a sharp-edged master of suspense…
Oliver North, Host of War Stories on Fox News and author of the nationwide bestseller, Counterfeit Lies.
www.OliverNorth.com

"Election: Unrestricted Warfare is taken straight from today's headlines. This powerful novel teaches truth while entertaining readers; it has everything you'd want in an engrossing political thriller and is written by a genuine American hero…"
Kevin D. Freeman, author of Game Plan: How to Prepare for the Coming Cyber-Economic Attack and Secret Weapon: How Economic Terrorism Brought Down the US Stock Market.

"Election: Unrestricted Warfare is a gripping read for everyone, even if politics and warfare are not your favorite subjects…Chris Graham is a gifted writer with tremendous understanding of irregular, unrestricted, and political warfare."
John Guandolo, Former FBI Counterterrorism Division agent and author of Raising a Jihadi Generation: Understanding the Muslim Brotherhood Movement in America.
www.understandingthethreat.com

We had a brief interview with Chris recently (GEW is Global Economic Warfare and CG is Chris Graham). Here are excerpts:

GEW: Chris, you were a Marine lieutenant colonel and a founding member of an anti-terrorism unit. Was that the origin of your interest in Unrestricted Warfare?

CG: Actually, I have been interested in irregular warfare tactics and strategy for as long as I can remember. I remember making files on the US hostages in Beirut and the Achille Lauro hijacking as a kid in an attempt to piece together from news articles who was involved and what their tactics were. I became interested in Unrestricted Warfare, specifically, when I first accessed an English translation of the PLA document with that name many years ago.

GEW: So what motivated you to write on this subject, and why fiction?

CG: I wanted to open people's eyes to some of the realities of how our adversaries have advocated applying these techniques to achieve their objectives by using evocative fiction. I wanted to write something that would be valuable for a guy who might have a great deal of operational special operations experience as well as for a naïve friend who might only be interested in entertainment, but who will still walk away with new insights.

GEW: The book is developed in multiple independent story threads that come together later and there are mysteries that an astute reader can solve as they go. It is not something to read while distracted. How do you describe the story?

CG: It was definitely my goal to do something innovative. The story is a narrative of tragically real acts of terrorism, intelligence operations consistent with the Unrestricted Warfare strategy that Chinese Col. Wang Xiangsui and Col. Qiao Liang wrote about along with a thread about a fictional American President and the attempts to manipulate her through the 2016 election.

GEW: In fact, your fictional president is operating a charitable foundation that is taking in money from a number of malefactors. Is this a fictionalized Clinton Foundation?

CG: Some of the questions I wanted to explore with this novel were: What if each Presidential scandal we have seen in recent years wasn't the result of chance? What if we dismissed the possibility of coincidence? What if each self-defeating policy had been pursued on purpose? What would those purposes be? There are aspects of each administration, even going back to Nixon's departure from the gold standard that I sample from, but Obama administration policies are the ones I explore the most. I created a fictional female President to make clear that my novel is not intended as an accusation against President Obama. It is a "what if" the worst case scenario played out in current events along the lines of what is knowable about our adversarys' real strategies within my fictional parallel universe.

GEW: The cliffhanger ending takes us up to the 2016 Presidential election and the Snowden chapters are quite interesting. What were some other inspirations?

CG: Well one specific thread is the 2008 market collapse. The best early account of likely adversary involvement that I encountered to flesh out my suspicion was in your book Secret Weapon and The New England Complex Systems Institute study described in my story is something I found after you wrote about it. As you know, al Qaeda officers have openly discussed a seven stage strategy to collapse the US government by 2020. Their claims match earlier events closely, and an interview that described this seven stage strategy in 2005 seems to have accurately predicted significant events from then to the present. It appears the AQ splinter group ISIS is continuing to employ the same strategy. It doesn't surprise me that citizens don't have time to immerse themselves in this information, but the fact that few elected representatives understand this, and even military officers, and law enforcement agents generally don't get it is tragic.

GEW: How vulnerable do you think we are to Unrestricted Warfare?

CG: We have no way of knowing how many more losses and missteps we can sustain in and out of war before American quality of life is significantly changed and degraded. I think we had better become much more judicious about where, when and how we fight and much more insightful of how our adversaries view these fights. Assuming technological and financial superiority in all of our future warfighting is very dangerous. Blindness to the ways adversaries have circumvented these things to achieve their objectives is even more dangerous.

GEW: Thank you, Chris, both for your great novel but even more for your service to our nation.

Please go to Amazon to order your copy of Election: Unrestricted Warfare today and post your review!