Facing Our Darkest Hour; Calling Forth the Dawn

Last night I took a break to re-watch the Academy Award-winning movie, Darkest Hour starring Best Actor Gary Oldman as Winston Churchill. The movie is inspired and inspirational. It is also powerful, timely, and appropriate.

Only just now, however, did I learn that today is Winston Churchill Day, commemorating the day he became an honorary citizen of these United States. He was the first person in history to enjoy that honor even as he was born to an American mother. The uniqueness of the day, coupled with the darkness of our hour, made the movie even more compelling. [Happy Churchill Day, by the way! And please note that next month we will feature an episode of Economic War Room® with my friend Nick Adams and his new book, Trump and Churchill: Defenders of Western Civilization.]

While watching the movie, I was struck by some amazing parallels between the circumstances facing the world in 1940 and those we face today. Yes, we face a silent menace while 80 years ago it was a boastful Adolph Hitler. But the world is upended now as it was then. And the future is not certain. Most of all, there is fear. What does the future hold? Will it ever be the same?

No one thought a tiny virus emanating from China and traveling silently around the world could wreak such havoc. Eighty years ago, people wondered how a recently defeated Germany could be subjugated by Nazis to threaten the world. But there they were. Poland, Belgium, Holland fell, and France was on the verge. The entire British Expeditionary Force had retreated and was trapped on the beaches of Dunkirk. There was no basis for hope.

As depicted in Darkest Hour, the mood of the elites in 1940 was to surrender to the scourge, and hope to be spared, minimizing the damage. Maybe some semblance of Western Civilization might be preserved. Perhaps Herr Hitler would allow some autonomy, free speech, free thought. The elites knew best, or so they thought. And they despised Churchill. [Likewise, the progressive left of today would prefer surrender to the virus and to China. They don't wish to open the economy. Rather, they view its closure as an opportunity for advancing their agenda. They despise the President.]

According to the movie, it wasn't until King George VI, once a Churchill detractor, offered his support to the Prime Minister that there was any hope. They became unexpected friends. The King counseled the Prime Minister to ignore the elites and take his case to the people. It was tremendous advice. In the movie, Winston Churchill exits his car en route to Parliament, opting to take the Underground. This event (coupled with King George's Empire-wide call for a Day of Prayer) provided the courage needed and ultimately set the stage for the Miracle of Dunkirk. 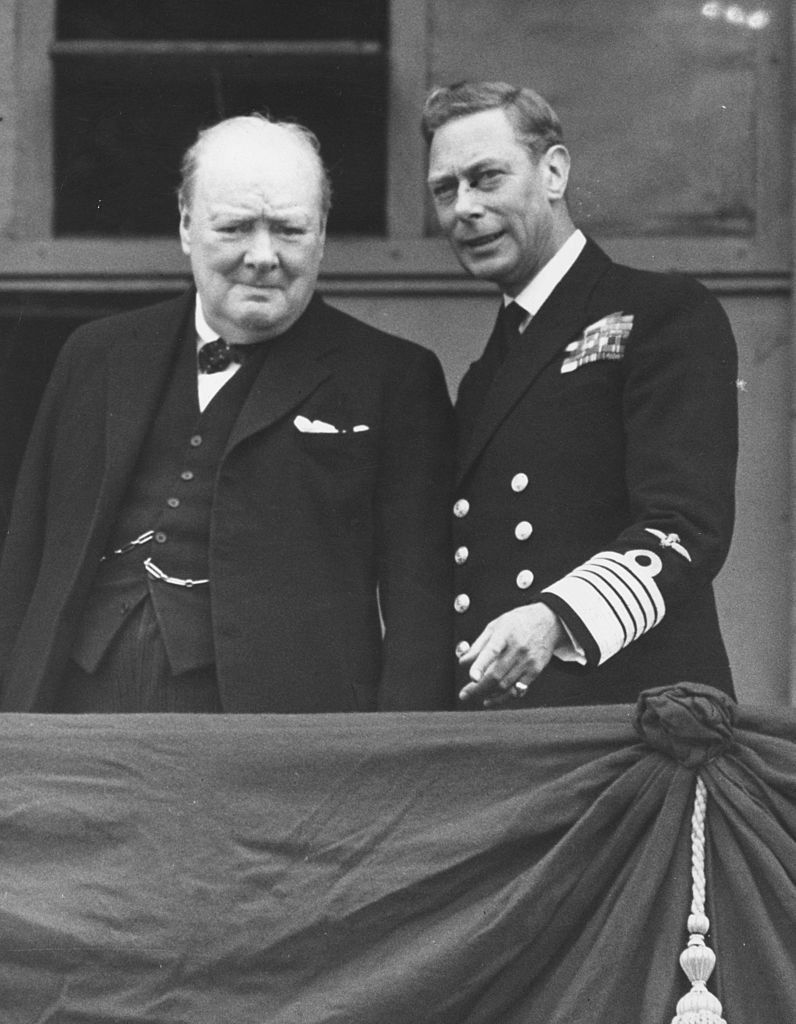 While scholars doubt that the subway scene depicted in the movie really happened, the scene so captures the sentiment of the day that some consider its portrayal the basis for Gary Oldman's Oscar. It is one of those, "if it didn't happen that way, it should have," moments.

There are some very real things depicted in the scene. The first of these is the demand from the British people that their nation "face the fear and fight the fight." There was no desire for surrender.

Churchill knew that nations which go down fighting will rise again. But those that surrender may never return. He also knew that the cause might be hopeless. At a minimum, it was fraught with peril. Little wonder that he was depicted as quoting from the poem ‘Horatius at the Bridge' by Thomas Babington Macaulay:

"Then out spoke brave Horatius, the Captain of the Gate:
To every man upon this earth, death cometh soon or late;
And how can man die better than facing fearful odds,
For the ashes of his fathers, and the temples of his Gods."

The point is simple. Everyone must face death. But it cannot be so feared that it prevents living and fighting for what you believe in. Over the past few weeks, I have had my subway moment, or at least the closest I could get in this time of quarantine. I've been on the phone and Skype with dozens of people across the country. There is fear, no doubt. The CCP Coronavirus is an awful thing. Some have lost loved ones without being able to say goodbye. Others have seen their business destroyed, or their investment portfolios ravaged. Still others have missed important events, locked away without friends or extended family. All have felt the pain of loss, one way or another. But the one nearly universal sentiment is that we must go back to work and our lives.

I have spoken at length with seniors, those most vulnerable to this horrible disease. They understand their own mortality. But they also know the hidden damage of a country that is shut down. They wonder, ‘Why not take precautions but get back to business?" They wonder "What value will there be if we lose our economy and our liberty?"

Next Tuesday, April 14, we will air a Livestream Special that may be the most important episode of the Economic War Room® we have ever aired. It will be available on our YouTube channel and also Facebook Live. It will be focused exclusively on How to Reopen the Economy Now (or as soon as humanly possible). Of course there should be precautions taken and good practices applied. Of course, the most vulnerable should be sheltered. But the simple fact is that without a change in course soon, the United States, indeed the whole world, is in peril. This is an existential threat to Western Civilization.

That is not an overstatement. Certainly we can last a while longer in our homes, sheltering in place. But as time progresses, the damage is cumulative and edges toward irreversible. The Free World is without question at stake.

If you've been a regular reader of this Blog, you know that China is willing to sacrifice whatever required to win this economic war. You know of the atrocities committed there. You know of the Intellectual Property Theft. You know of the lies regarding the origin of the virus. And you no doubt question the official statistics coming from China and wonder just how the virus may have been contained if indeed it ever was.

The truth is that the Coronavirus is the short-term threat, but China is fully prepared to take advantage of it. They are happy to reopen their economy with the hope of global advantage. From Josh Rogin in the Washington Post on March 16:

In Washington, there's a lot of talk about how the coronavirus crisis could increase the push for more economic decoupling with China. But the Chinese government is thinking about it in exactly the opposite way. Beijing is preparing to use the crisis to advance China's economic strategy against us. We better start taking notice…Now, several Chinese government agencies and officials are talking publicly about how China can take advantage of being the first country to start recovering from the novel coronavirus (because it was the first country to contract it) to take over the industries of the future.

"They have a post-virus strategy, and it is already underway," said Nate Picarsic, co-founder of Horizon Advisory, a consultancy that tracks Chinese government and economic activity. Horizon issued a new report Sunday, drawn from official Chinese government and media sources, that spells out how Beijing is planning to use the downturn in Western economies to its benefit. China intends to seek out more foreign direct investment, seize market share in critical industries and try to stop the West from confronting its bad behavior.

Even without China's opportunism, we'd face a tough battle in the aftermath of a pandemic. But we are in a global economic war and we have shuttered our economy. Here's the hopeful news:  WE CAN STILL WIN!

We celebrate Resurrection Sunday this weekend and should use it to cry out to God for mercy in repentance of our arrogance and sin and then get back to work next week! If you recall the Passion that took place nearly 2000 years ago, Jesus was crucified on Friday, truly the Darkest Hour of all time. The good news? He rose again on Sunday. And that's something to celebrate!

Now is the time to face what may be this generation's Darkest Hour. With the help of God Almighty, our repentance, and the steadfastness of our hearts, we can enjoy victory as well.

The Darkest Hour movie concludes with the wrap up of Churchill's very famous speech on June 4. I have re-written excerpts with adaptions to address our situation (and with the hope that the author would understand the purpose of the liberties taken):

"Turning once again, and this time more generally, to the question of the virus and the correspondent threat of communism, I would observe that there has never been a period in all these long centuries of which we boast when an absolute guarantee against pandemic, still less against serious illness, could have been given to our people…

I have, myself, full confidence that if all do their duty, if nothing is neglected, and if the best arrangements are made, as they are being made, we shall prove ourselves once again able to protect our most vulnerable, to restore our economy, and to outlive the menace of tyranny, if necessary for years, if necessary alone. At any rate, that is what we are going to try to do. That is the resolve of this Republic. That is the will of the people and the nation. Good people regardless of background, linked together in their cause and in their need, will defend their future, aiding each other like good comrades to the utmost of their strength. Even though many have fallen or may fall to this silent menace of disease or the scourge of economic warfare, we shall not flag or fail. We shall go on to the end, we shall fight in the hospitals, we shall fight in the marketplace, we shall fight with growing confidence and growing strength in the economy, we shall defend our liberty, whatever the cost may be, we shall fight on the beaches, we shall fight on the landing grounds, we shall fight in the fields and in the streets, we shall fight in the hills; we shall never surrender, and even if, which I do not for a moment believe, this nation or a large part of it were subjugated and starving, then our great entrepreneurs and scientists, armed and guarded by free enterprise, liberty, and prayer would carry on the struggle, until, in God's good time, the Almighty One, with all His power and might, steps forth to the rescue and the answer of the prayers of His people."

After speaking with good men and women across this nation, I believe the resolve is there.

The question they are asking is not if we should do this, but HOW?

Tune in to the Economic War Room® on Tuesday, April 14 at 1 pm Central Time and learn the Key Ideas We Have to Open the Economy Now.

YOU CAN REGISTER HERE TO BE NOTIFIED OF THE UPCOMING FREE LIVE EPISODE.