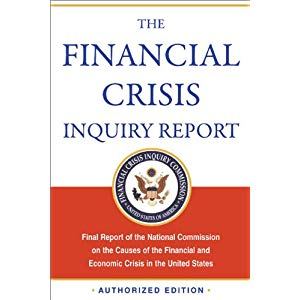 Today, the Financial Crisis Inquiry Commission released its report to Congress and the American people. It is a monumental work of over 600 pages representing the  review of millions of pages of documents, the testimony of more than 700 witnesses, and 19 days of public hearings. The good news is that this report has begun a necessary public dialogue on a critical subject. The final report came with two dissenting opinions, however, and there is a great deal more to study.

The Commission's described its mandate in the Conclusions section:

"The Financial Crisis Inquiry Commission has been called upon to examine the financial and economic crisis that has gripped our country and explain its causes to the American people. We are keenly aware of the significance of our charge, given the economic damage that America has suffered in the wake of the greatest financial crisis since the Great Depression."

The WALLISON/BURNS section phrased it this way:

"The Commission's statutory mission is ‘to examine the causes, domestic and global, of the current financial and economic crisis in the United States.'"

Having said all of that, the statement I find very interesting is from WALLISON and BURNS:

"the Commission majority's report ignores hypotheses about the causes of the financial crisis that any objective investigation would have considered, while focusing solely on theories that have political currency . . ."

While differing greatly as to the cause, the Commissioners did agree on a few basic points. For example, all would agree that the collapse of systemic institutions played a major role. From the summary from the HENNESSEY, HOLTZ-EAKIN, AND THOMAS dissent:

"In quick succession in September 2008, the failure, near-failure, or restructuring of ten firms triggered a global financial panic. Confidence and trust in the financial system began to evaporate as the health of almost every large and midsize financial institution in the United States and Europe was questioned . . . The financial shock and panic caused a severe contraction in the real economy."

Note that this statement is relevant to but not identical to the statement from George Soros:

‘…it's clear that AIG, Bear Stearns, Lehman Brothers and others were destroyed by bear raids in which the shorting of stocks and buying CDS mutually amplified and reinforced each other."

For my part, I believe that the FCIC covered a good deal of valuable ground. They definitely studied what happened to the major financial firms and how that has impacted our economy. What is not addressed in the FCIC report, however, is whether or not these "bear raids" could have been in any way perpetrated as a silent act of financial warfare against the interests of the United States. While that is a seemingly far-fetched question, it is not without merit. In fact, as we have mentioned, such an effort, using the precise mechanics mentioned by Soros, has been a part of both Chinese military doctrine and Islamic Financial Jihad as described by militants for a number of years. [More than a decade ago, two Chinese military strategists published a book through PLA Press (Unrestricted Warfare) that outlines one of the best ways to diminish America's superpower status. It basically describes a targeted "bear raid" tactic that they attribute to George Soros.] This was a part of the hypothesis examined in my report, provided to DoD, and presented to the FCIC (albeit at the tail end of the Commission's tenure).

Building on the work of the FCIC report is essential. For national security reasons, we must delve further into the hypothesis that Global Economic Warfare and/or Financial Terrorism may have played a role in the 2008 collapse. There is certainly sufficient credibility to require further investigation at a minimum. More importantly, whether or not the bear raids had a Financial Warfare aspect to them (and I have seen a lot of suggestive evidence to support that view), we should certainly be aware that:

1)      Known potential enemies of the United States definitively include Financial Warfare as part of their military doctrine,

2)      These prospective enemies clearly have the capability  to successfully attack even on a stealth basis if so desired, and

3)      That we continue to remain vulnerable to such attacks with potentially devastating consequences.

Given this, the FCIC analysis is a good start but remains incomplete without a thorough examination of the possibility that Financial Warfare was involved.