On February 19th, we posted about how a Muslim preacher was urging followers to take advantage of the welfare system to fund jihad. This happened both in the United Kingdom and Australia:

There has been outrage that some have viewed our generous welfare systems in Western Economies as a means to fund Jihad. There are many legitimate welfare recipients who are greatly benefited by a little assistance. But using the money for Jihad is a serious problem. Even worse, if a sufficient number abuse the system, they could overwhelm it and bankrupt the generous host. Some call this the Cloward-Piven strategy. Has it been adopted by Jihadists?

Take a look at that post, the articles and the videos.

Now, it appears that our Boston Bombers may have taken such advice to heart.  According to press reports:

Marathon bombings mastermind Tamerlan Tsarnaev was living on taxpayer-funded state welfare benefits even as he was delving deep into the world of radical anti-American Islamism, the Herald has learned.

State officials confirmed last night that Tsarnaev, slain in a raging gun battle with police last Friday, was receiving benefits along with his wife, Katherine Russell Tsarnaev, and their 3-year-old daughter. The state's Executive Office of Health and Human Services said those benefits ended in 2012 when the couple stopped meeting income eligibility limits. Russell Tsarnaev's attorney has claimed Katherine — who had converted to Islam — was working up to 80 hours a week as a home health aide while Tsarnaev stayed at home.

In addition, both of Tsarnaev's parents received benefits, and accused brother bombers Dzhokhar and Tamerlan were recipients through their parents when they were younger, according to the state.

The news raises questions over whether Tsarnaev financed his radicalization on taxpayer money.

TO CONTINUE READING at BOSTON Herald.com….

We also note that something else we addressed in an earlier post is sadly validated by the Boston Marathon bombing. It appears that Tsarnaev learned how to build his bomb reading Inspire, an English-language al Qaeda publication:

Here is a CBS News video that also tells the story:

This is the same al Qaeda publication that told jihadists to focus on attacking the American economy. From an article at ADL.org: 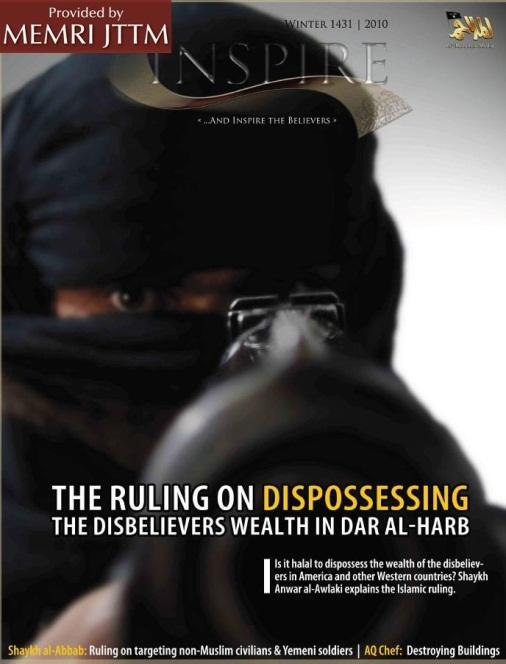 The fourth issue of the English-language terrorist magazine Inspire, released online by the media wing of Al Qaeda in the Arabian Peninsula (AQAP) on January 16, 2011, calls for terrorist attacks in the U.S. and provides instructions on how to destroy buildings.

Similar to the previous three issues, all released in 2010, the January 2011 edition of Inspire contains original pieces by Americans aligned with AQAP, as well as previously published materials by several Al Qaeda leaders including Osama bin Laden, Adam Gadahn and Abu Mus'ab al-Suri.

The magazine includes a to-do list telling readers to "buy handguns," "make bomb [sic] in mom's kitchen," "blow up Times Square," and "pull off [a] Mumbai [attack] near While House till martyrdom." It also provides practical instructions on how to make explosives and shoot guns. An article entitled "Open Source Jihad," which has appeared in different variations in past editions of Inspire, provides step-by-step instructions on how to destroy buildings with chemical and mechanical explosions and how to use an automatic weapon to carry out an attack . . .

Another article, entitled "The Ruling on Dispossessing the Disbelievers wealth in Dar al-Harb" is written by Anwar al-Awlaki, the American-born Muslim cleric who has inspired several Americans charged on terror-related offenses. In the article, al-Awlaki discusses the importance of stealing money from non-Muslims for "jihad-related purposes."

The Boston Marathon Bomber admits that he read the article in this copy of Inspire. The cover story was dedicated to stealing money and is really just economic warfare.

Make no mistake, the war for civilization continues and it is an economic war. Last week's attack in Boston shows that it has come to our shores.