Financial Terror Threat is Focused on London and New York 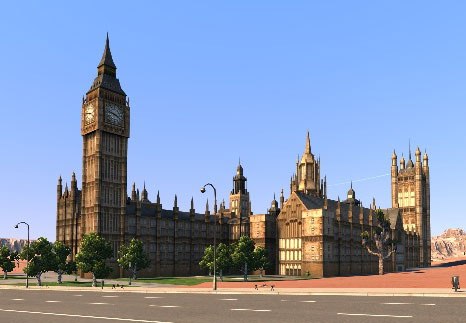 Under the revelation from Admiral Rogers that more than one nation state (presumably China, Russia, Iran, and maybe North Korea) could wipe out our power grid (really a matter of "when," not "if"), many missed the other warnings recently issued. These warnings came from London and also New York that ISIS has planned attacks on the financial industry even as New York overtakes London as the financial capital of the world.

This is not a minor story. A successfully crippling financial attack on either London or New York could begin a chain reaction devastation capable of taking down Western civilization:

"There could be a very serious impact to the financial institutions of the world through a cyber-attack, and I think it's a very strong likelihood that it will happen one day in the future, which is why we've got to push back and take action now before it happens," City of London police commissioner Leppard tells the Financial Times. Of particular concern, he says, is the Islamic State, better known as ISIS or ISIL, (see What Cyberthreat Does ISIS Pose?).

Leppard's warning echoes that of Benjamin Lawsky, who heads the New York Department of Financial Services. In September, Lawsky voiced concerns over the potential damage that an "Armageddon-type cyber event" could wreak havoc on financial markets. "Cybersecurity experts will tell you when they get in a room with a bunch of CEOs to talk about this, there's only two types of people they meet: people who have been hacked and know it and people who have been hacked and don't know it," Lawsky said at a recent event, the Guardian reports.

Already, of course, financial exchanges have been regularly targeted by attackers, although their intentions aren't always clear. "Evidence [suggests] that all of the stock exchanges in the world have been breached in the last 10 years, Nasdaq, London Stock Exchange, all of them," London police commissioner Leppard told the Financial Times. Likewise, numerous banks have been breached, including JPMorgan Chase. Based on what's been publicly disclosed about the investigation of the Chase breach, neither the attacker, nor the goal of the attacks, is clear.

Should we take the concern seriously? Absolutely. ISIS has recruited and is developing sophisticated hackers. This is a serious advance from what many perceived as dismissible efforts just a few months ago.

Rather than developing hacking skills internally, furthermore, ISIS has been attracting new recruits that already have serious information security skills, Hypponen says. "ISIS has among their roster several western hackers who have moved to Syria or Iraq and are operating among them," he says. "Some of them are good enough to be taken seriously. ISIS also operates sites in the deep Web – Tor hidden services – that are asking for donations for the Islamic State in bitcoins."

ISIS has also been developing online courses, with members "actively educating each other on hacker tactics," he says, citing as just one example an ISIS online course about how to use the open source Metasploit penetration testing toolkit. [To CONTINUE Reading at GovInfo Security…]

This story was carried a few other places:

City of London Police chief Adrian Leppard has warned banks that they are ‘very likely' to become a target for cyber terrorists.

The force commissioner has called for better protection to defend the Square Mile, the Financial Times (FT) reported last week.

In preparation for the likely attacks, the force is strengthening ties with the New York District Attorney's Office. This will involve the district attorney and City of London police permanently deploying staff in each other's offices.

Earlier this year Benjamin Lawsky, head of the New York Department of Financial Services, admitted to being concerned about the US financial system's vulnerability and warned of an "Armageddon-type cyber event".

Speaking at a joint conference on cyber security on Wednesday, Leppard echoed similar fears for Britain.

He told the FT: "We look at terrorism and you think… if global trading stopped that would have an enormous impact on Western society, global society… at the heart of capitalism."

He added: "I think it's a very strong likelihood that it will happen one day in the future, which is why we've got to push back and take action now before it happens."

Islamic terrorists such as Isis are a strong candidate to carry out the attacks, which could wreak havoc on financial markets across the globe. [To CONTINUE Reading at MISCO…]

Here is a link to the original Financial Times article (registration required):

With this warning comes the revelation that global terror risks are increasing at an alarming rate. And, ISIS has been minting its own gold-backed currency (something we will explore in a future blog post), which matches with the al Qaeda long-term strategy. The plan was to issue a gold-backed currency: 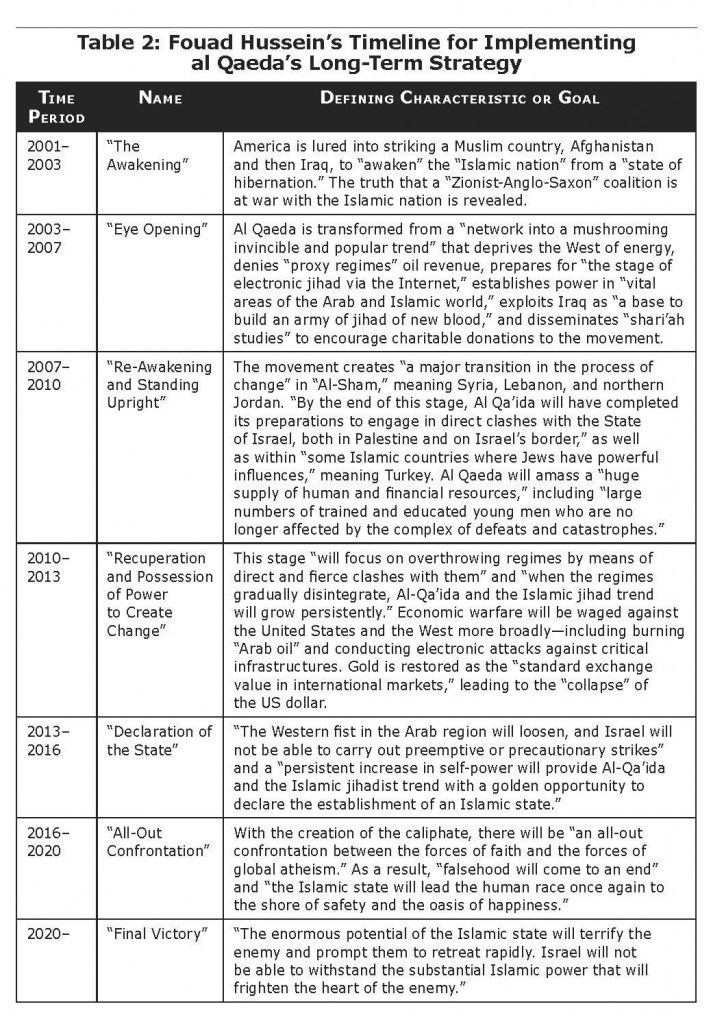 It should come as no surprise that ISIS joins al Qaeda in desiring to destroy and replace the Western financial system with a Shari'ah-based system. This is another serious front in the global economic war we are fighting. It is literally a battle for Western Civilization. Despite this reality, we go out of our way to embrace groups like CAIR (declared a terror group along with the Muslim Brotherhood by the United Arab Emirates but supported by our own State Department).

One thing that should be considered, however, is that the best solution to defending America was shared in the Presidential inaugural address of 1853:

"It must be felt that there is no national security but in the nation's humble, acknowledged dependence upon God and His overruling Providence."

While there are plenty of things to criticize about Franklin Pierce, this quote rings true. As much as anything, we are facing a spiritual battle and we need our own humility and the blessed help of a sovereign God. Therefore, it seems fitting to conclude with the Thanksgiving proclamation of President Washington: 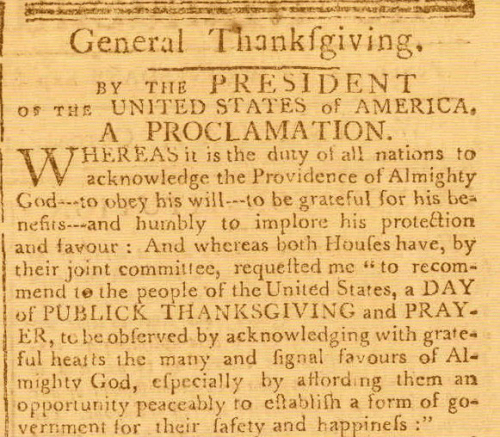 By the President of the United States of America, a Proclamation.

Whereas it is the duty of all Nations to acknowledge the providence of Almighty God, to obey his will, to be grateful for his benefits, and humbly to implore his protection and favor— and whereas both Houses of Congress have by their joint Committee requested me to recommend to the People of the United States a day of public thanksgiving and prayer to be observed by acknowledging with grateful hearts the many signal favors of Almighty God especially by affording them an opportunity peaceably to establish a form of government for their safety and happiness.

Now therefore I do recommend and assign Thursday the 26th day of November next to be devoted by the People of these States to the service of that great and glorious Being, who is the beneficent Author of all the good that was, that is, or that will be– That we may then all unite in rendering unto him our sincere and humble thanks–for his kind care and protection of the People of this Country previous to their becoming a Nation–for the signal and manifold mercies, and the favorable interpositions of his Providence which we experienced in the course and conclusion of the late war–for the great degree of tranquility, union, and plenty, which we have since enjoyed–for the peaceable and rational manner, in which we have been enabled to establish constitutions of government for our safety and happiness, and particularly the national One now lately instituted–for the civil and religious liberty with which we are blessed; and the means we have of acquiring and diffusing useful knowledge; and in general for all the great and various favors which he hath been pleased to confer upon us.

And also that we may then unite in most humbly offering our prayers and supplications to the great Lord and Ruler of Nations and beseech him to pardon our national and other transgressions— to enable us all, whether in public or private stations, to perform our several and relative duties properly and punctually–to render our national government a blessing to all the people, by constantly being a Government of wise, just, and constitutional laws, discreetly and faithfully executed and obeyed–to protect and guide all Sovereigns and Nations (especially such as have shewn kindness unto us) and to bless them with good government, peace, and concord–To promote the knowledge and practice of true religion and virtue, and the encrease of science among them and us–and generally to grant unto all Mankind such a degree of temporal prosperity as he alone knows to be best.

Given under my hand at the City of New York the third day of October in the year of our Lord 1789.

Praying for our nation and wishing you a Happy Thanksgiving!