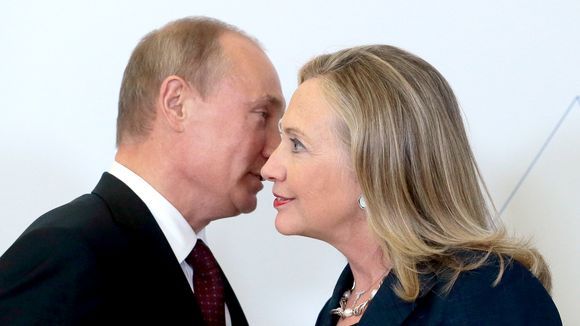 The Democrat National Committee (DNC) is blaming Vladimir Putin and Russian cyber warriors for hacking their servers and releasing to Wikileaks all sorts of incriminating emails. They tell us "never mind the content" because it is all a foreign plot to help Donald Trump win the White House. This is so very rich in so many ways.

First, let's start with the irony that the DNC being hacked keeps the reality of an email scandal front and center in front of American voters, overshadowing the Democrat convention. For months, we have been painfully aware that Secretary Clinton put sensitive and classified information at risk on her private server. She claims that the Secret Service was guarding it but that is really deceitful. Yes, the Secret Service may have guarded the physical location of her server as it was in the Clinton residence. But by no means were they responsible for cyber security of a private server. Period. It is simply not their job.

Secretary Clinton used these same word games earlier when asked whether or not she had "wiped her server." She answered, feigning ignorance, "like with a cloth or something?"

According to FBI Director Comey, Secretary Clinton placed American national security at risk intentionally or inadvertently and that should outrage all of us, whether or not he recommended indictment. According to Comey, there was classified information, some "Top Secret," accessible from her unguarded server.

Now, we know what embarrassing things can be found in a hacked server. We know that the DNC, for example, conspired to rig the primary election in Clinton's favor against Bernie Sanders. There is a great deal of other very troubling information as noted by Gateway Pundit. All of this really makes the Democrat Party "con" explained by Dinesh D'Souza frighteningly real. There is clearly a hidden truth at the DNC that they want to keep from the American people.

Hackers (or insider leakers) and Wikileaks had different ideas, exposing corruption. Now, we believe that if the RNC (Republican Party) were hacked and emails exposed, there likely would be a lot of corruption shown there as well. Sadly, that seems to be the nature of modern politics. For Secretary Clinton, we may never know if there were embarrassing information among the tens of thousands of deleted emails or the emails once deleted but recovered by the FBI. The FBI was not looking for embarrassing truths but rather national security risks.

What is so important here, though, happens to be the fact that neither Secretary Clinton nor the Democrat Party as a whole seems to have a handle on cyber security. Obviously, this is a complex and difficult task–guarding our nation in a digital age. But, should we trust someone who purposely circumvents the cyber security rules of our government? The reality is that our nation's secrets are a lot more important than the embarrassing things uncovered about the DNC. Real lives and our future were put at risk.

Rather than apologizing profusely and taking steps to correct the obvious weakness, however, the DNC took the very unusual step of devising a theory that the hack was conducted by the Russians at the request of Putin to help elect Donald Trump. And that is the crux of what I'd like to cover here. The DNC has publicly shared that they believe foreigners will use cyber and other means to influence American elections. [Never mind that foreign donors secretly supported President Obama in 2008 and 2012 or have openly funded the Clinton Foundation for years.] What the DNC is claiming is that covert and insidious efforts are underway to control who becomes the next President of the United States.

Do we believe Putin is capable of doing this? Absolutely! Do we think he did it? Perhaps. But the reality is that there is a more certain path to controlling the election. As reported in the USA Today, one of the surest indicators of who will win the White House is the stock market. When stocks are rising, the incumbent party most often retains power. When stocks are falling, the incumbent party loses. Since 1928 (according to USA Today), there is only one instance that the incumbent party retained the White House with declining market. The year was 1956 and Eisenhower was able to overcome a 2.6% decline in the S&P 500. The 19.5% decline in 2008, however, was as sure a predictor as imaginable that then-Senator Obama and the Democrat Party would take control. In fact, until the September 11 cascading failure of Lehman Brothers triggered the collapse, McCain/Palin were leading Obama/Biden in the polls. Even Vice President Biden admits that the market collapse won the election for them.

You might think that the Party that fears an email hacking could influence our election might be concerned about the possibility of market manipulation. After all, the Russians have claimed they have that capability. And, the Russians have made multiple intrusions into our market. And, there were clear signs of market manipulation in 2008 as we noted in our Pentagon research and best-selling books.  Sadly, however, neither the Democrats nor the Republicans bothered to look closely at the foreign manipulation that took place in 2008's market collapse.

Of course, the corollary is also true. Those who want the incumbent party to retain the White House might seek to keep the stock market inflated, at least through the election. Certainly sounds like a conspiracy theory. But is it any more conspiratorial than blaming email embarrassment on Russian hackers? Regardless of the motive, someone could try to rig stock prices to remain artificially high. Many analysts believe this has been happening with the culprit being the central banks in power.

So, a reasonable question that must be asked is whether or not the market's consistent rise this election season is real or artificial? And, if someone wanted to elect the out-of-power party, could they manipulate share prices by cyber or other means?

For our part, we appreciate that the DNC is highlighting the dangers of cyber-economic manipulation to control our elections. We just think they should look a little more closely at how they gained the White House in 2008. And we should all wonder if there might be a puppet master at work right now.