Forget the Shutdown, Our Next Problem is the Dollar 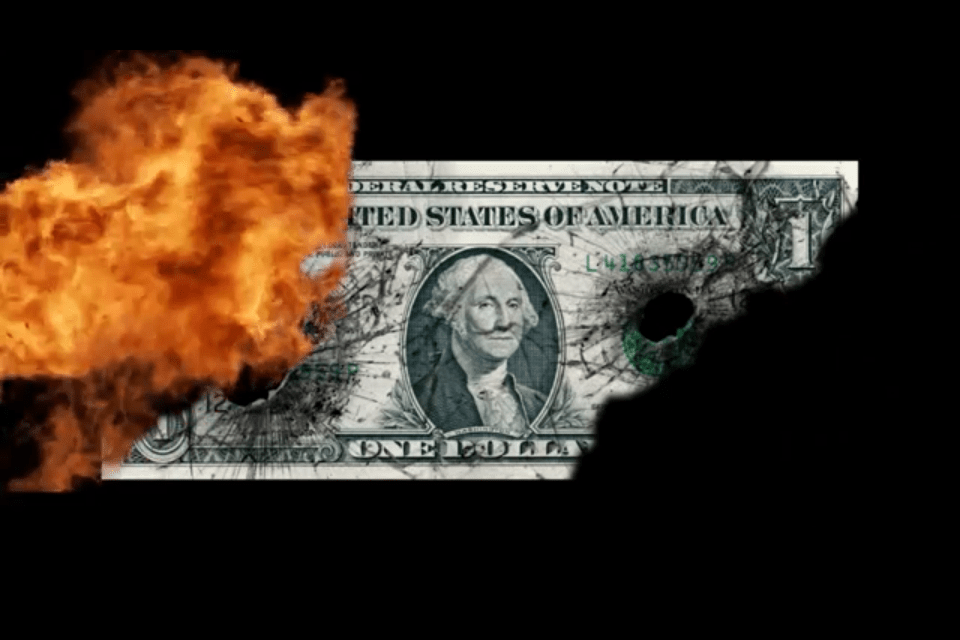 The chatter against the dollar as global reserve currency has ramped up in recent days. The risks are huge and largely ignored. Even allies are questioning how long the dollar can sustain its status in light of our enormous debt and deficit. Now, with the government shutdown in place and a political battle over the debt ceiling, our enemies are looking at the possibility of an attack on our currency during the confusion.

Sadly, too many believe that our dollar will remain permanently strong. Of course, these are in many cases the same people who would argue that deficits don't matter and that the Treasury could mint $1 trillion platinum coins, essentially making up money out of thin air, and no one would complain. They are living in a fantasy world, emboldened by doctored government statistics that attempt to show there is no inflation in the system.

Will the dollar remain permanently strong no matter how bad our fiscal and monetary policy? Logic, the facts and history say otherwise.

Simple economic theory shows that if you produce more supply of something without an increase in corresponding demand, the price of that item will fall. Obviously, we have greatly increased the money supply and the Federal Reserve's balance sheet in recent years despite anemic economic growth. Thus, the value of the dollar is destined to fall. The only thing keeping it up at all is the fact that foreigners need dollars for international trade, especially oil purchases. If nations truly begin trading in other currencies, demand will actually drop. Combined with increased supply, the price will plummet.

The only thing backing the dollar at this point is the "full faith and confidence" of the U.S. government. So what happens in a government shutdown? Or a failure to raise the debt ceiling? Would that be an excuse to begin a run on the dollar without being blamed?

The truth is that no "fiat" currency is permanent. A fiat currency is defined by Investopedia as:

"Currency that a government has declared to be legal tender, despite the fact that it has no intrinsic value and is not backed by reserves. Historically, most currencies were based on physical commodities such as gold or silver, but fiat money is based solely on faith."

The American dollar is the most widely circulated fiat currency in the history of the world. Unfortunately, fiat currencies are never permanent. Even the venerable Mark Mobius of the Templeton Funds understands that the day will come when fiat currencies are no longer accepted. He was quoted in a CNBC article last year:

"It's already happening, you're beginning to see that trend with central banks stocking up on gold. The estimate is that at least half of the buying is central bank buying. They are looking to the day when they can say okay, our currency is backed by gold and therefore we're a strong country," Mobius told CNBC Asia.

Mobius has $50 billion under management.

Read that carefully. Mark Mobius is no fear monger. I worked with him at Templeton and respect him a great deal. He travels the world extensively and is successful because he has his pulse on the thinking of people from a wide variety of cultures and backgrounds. He works for one of the largest asset managers on the planet. And, he's right about this.

The average life span of a fiat currency is 27 years. Our dollar has been unbacked by gold since 1971 and is therefore "long in the tooth." Even if everyone loved our dollar and America, at its current age and health condition, we'd have cause to worry. The problem is, however, that not everyone loves us, as much as we hate to say it.

We recently shared the al Qaeda plans to destroy the dollar. We have also written extensively on Russian, Chinese, and even Iranian plans to replace the dollar as reserve currency. With the Syria conflict, these plans were pulled front and center. Take a quick glance at excerpts from this important article that appeared last week at MoneyNews:

Syria, Russia and Iran: Killing the US Dollar

On Sept. 6, 2012 (while the United States was enjoying the Democratic convention), we had what seemed then to be a catastrophic announcement. China announced that they were willing to sell oil in yuan. Now with China being such a large importer, why would it sell any oil? The lynchpin to this announcement was the agreement between Russia and China, where Russia agreed to supply China as much oil as it needs indefinitely, and that too in yuan, not U.S. dollars.

So we can trace the snookering of Obama on the world stage back to this agreement. With the connection between Russia and China and the Russian naval base in Syria, we had a nexus that was hard to challenge when it came to the support of Syria on the international stage.

No discussion can be complete on Syria and Russia without the mention of Iran. Iran as an economy has failed. But as a strategic ally to Syria and being closely tied to Russia for its own support for its nuclear program, Iran will always play ball with Russia and Syria. China basically allows the trifecta to blossom as it poses a real challenge to the United States, which is the ultimate target for China.

Once you build this bridge, it is only a matter of time before China flexes its muscle (yuan) and starts actively trading oil in yuan rather than the U.S. dollar. It was a long drawn dream of Iran to start an oil bourse that would trade oil in non-U.S. dollars. It did not have the economic clout to do so and due to its pariah status, was never taken seriously.

China, on the other hand, is a whole different story. Once Syria is secured (not invaded), it will become a gateway for China and Russia to influence oil in the region and with oil trading in yuan by then, it is only a matter of time before the mighty dollar tumbles.

Back on May 8, I announced the demise of the U.S. dollar as the reserve currency in 2013. Little did I know that Syria would be the leading edge of the sword that made another cut into the U.S. dollar?

While the world is overtaking us, we sit and fight each other about defunding Obamacare.

Who is protecting us from the world defunding the United States?

What will be the plight of the U.S. dollar when this all plays out in the next year if not sooner?

To read the Complete Article . . .

Now, it's not just our enemies who recognize that the dollar is in serious trouble as noted in a WorldNetDaily article that also appeared last week:

‘One takes a deep breath and reboots the entire system'

Christopher Monckton of Brenchley – who advised Prime Minister Margaret Thatcher, wrote for the Yorkshire Post, was managing editor of the Telegraph Sunday Magazine and is now a columnist for WND – long has warned that the West is on a terminal financial course, from which recovery eventually will not be possible.

In a recent commentary, he wrote that it's not a matter of "whether but when."

More than a year ago, he told WND that the financial collapse of the West was plausible based on its path at the time. He then adjusted the forecast from "plausible" and "likely" to "imminent."

"The gravy train has now tipped into the gulch. The cash for such criminal indulgences has run out. It is now time for governments everywhere to get a grip on the costs inflicted upon taxpayers by governmental employees at every level. Unless this is done, and very soon, the West will fail," he said.

"Forget the dollar. It is finished. America needs a sound currency.

Jim Rickards, author of Currency Wars has been speaking out on this subject for quite some time. Here is a YouTube example:

The bottom line is that we are in a Global Economic War. There are solutions but no one seems to be listening.

As for me and my house? We shall pray and seek God according to 2 Chronicles 7: 14:

14 If my people, which are called by my name, shall humble themselves, and pray, and seek my face, and turn from their wicked ways; then will I hear from heaven, and will forgive their sin, and will heal their land.

This is serious and it is time for prayer! Repentance, prayer, and fasting worked for Nehemiah, Mordecai, and Esther in times of serious crisis. Time to get on our knees.