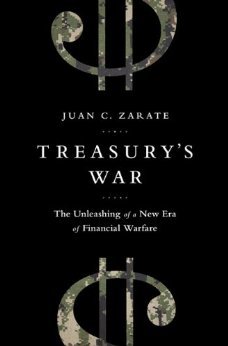 For anyone who doubts that we are in a Global Economic War, as this Blog and our first book, NY Times Bestseller Secret Weapon, have suggested, please buy and read Juan Zarate's Treasury's War.

Zarate had first hand experience in the Treasury Department, unleashing a new era of warfare against America's enemies. He was the first ever assistant secretary of the Treasury for terrorist financing and financial crimes. His 488-page book published by Public Affairs books is tantamount to a first-ever admission by a very recent senior government official that a financial/economic war was already underway.

The New York Times did a decent review of the book but their primary focus was regarding the fact that our government was conducting financial warfare. Excerpts and a link to the full article:

In ‘Treasury's War,' Missiles for a Financial Battlefield

THE 21st century has ushered in new kinds of warfare that don't involve soldiers wielding weapons. One type, cyberwarfare, seems to have drawn the most commentary and analysis. A less publicized type of attack, financial warfare, is covered in"Treasury's War," a useful new book by one of this strategy's architects, Juan C. Zarate, a former assistant Treasury secretary . . .

For those of us who start feeling drowsy at the very mention of the words "Treasury Department," this book is an eye-opener. Under Mr. Zarate, and his successors, Treasury quietly built new capabilities that owe less to junk bonds than to James Bond.

"Treasury's War" chronicles an array of the department's enforcement efforts, from corralling informal Middle Eastern money-transfer networks useful to Al Qaeda to tracking Saddam's missing millions. But the heart of the book is the emergence and evolution of Section 311 of the Patriot Act, which allows the Treasury Department to designate any bank in the world as a "primary money-laundering concern" and prevent it from doing business with any American bank . . .

"Geopolitics is now a game best played with financial and commercial weapons," Mr. Zarate writes. "The new geoeconomic game may be more efficient and subtle than past geopolitical competitions, but it is no less ruthless and destructive."

To CONTINUE Reading at The New York Times . . .

The article concludes with a nebulous "…'Treasury's War' does a fine job of shedding light on a new and significant aspect of international relations that many of us may not be aware of, and that is likely to gain in importance in the years to come. The risk, Mr. Zarate concludes, is that other nations are now learning Treasury's new tricks, and may eventually find ways to use them against us."

This does not do justice to the reality that Mr. Zarate underscores in his book:

1) We do have enemies and they are already aware of our financial and economic vulnerabilities.

2) While we have built extensive offensive capabilities, we have done virtually nothing to defend ourself from this very real threat.

"The United States faces direct challenges to its economic predominance and financial influence, and is unprepared to defend itself from the looming external threats and internal vulnerabilities. "

Consider that quote in light of this Blog post we wrote:

Will the Sun Set on the American Empire?]

Zarate also makes a point that we have made for nearly five years:  That our first step is to understand we are already in a global economic war (from page 413):

Here are just two of the many posts we have made regarding this critical concept:

It's All About the Economy, Part Two]

Zarate outlines a variety of threats as we have, including cyber. But he reserves special attention for a vulnerability that we have repeatedly identified, namely the U.S. dollar as the world's primary reserve currency. Starting on page 399, he covers a section titled "Attack on the Dollar?" Here are a few quotes:

"Attendant to this crisis of fiscal legitimacy are increasing challenges to the primacy of the U.S. dollar."

". . .  in the wake of the Great Recession, there are convincing signs that we are headed for a restructuring of the international monetary system as faith in the dollar faltered. The reality is that countries are now questioning the wisdom of carrying debt obligations solely in dollars, and they are moving toward baskets of currencies and alternate trading conventions and currencies to reduce their reliance on the dollar."

"All five of the BRICS (Brazil, Russia, India, China, and South Africa have taken significant steps toward trading in their own currencies, diversifying their foreign exchange reserves, and hedging against the growing instability of the dollar and euro."

"A more dangerous scenario is an intensification of what James Rickards has termed ‘Currency War III."

"Though the dollar remains predominant for now and seems to be the currency of choice amid economic turmoil in Europe, it–along with American financial predominance–is coming under direct assault."

[Here are a couple of links to a few Blog posts in which we made ver similar points:

Putin Prepares for a Currency War that He Thinks (Hopes?) Will Collapse America]

Zarate also explains that these aren't just economic conditions. They are actual vulnerabilities that enemies would like to exploit:

One of those critical vulnerabilities is our dependence on foreign funding for our large and growing federal debt:

"Consider first that the United States finds itself increasingly vulnerable to dependency on foreign sources of funding for its fiscal survival."

[We've covered this as well when we documented that the Chinese view their holdings of our debt is a serious weapon:

Are China's Holdings of American Debt a Weapon?]

Another of those vulnerabilities is our dependence on foreign energy:

"Iran, Venezuela, Russia, Qatar, and other countries whose interests may not align with those of the United States maintain an ability to disrupt supplies of affect price fluctuations in ways that impact the US economy . . . the result is that the United States borrows $1 billion per day in order to import oil."

[We've covered this as well:

The Weapon of Oil?]

Zarate also covers our dependence on foreign manufacturing and capabilities both for industry and our defense systems. He then provides special focus to our cyber vulnerability:

"Perhaps the biggest source of US vulnerability is not in terms of physical resources but rather in virtual systems . . . In a recent speech, General Keith Alexander, the head of the National Security Agency and Cyber Command, pointing to a seventeen-fold increase in attacks against US infrastructure between 2009 and 2011, graded US preparedness to withstand a cyber-attack against its critical infrastructure as ‘around a 3' on a 10-point scale."

Unlike most analysts, however, Zarate does not stop with cyber but rather sees cyber as a part of overall financial warfare:

"The blending of financial and cyber warfare represents the new frontier . . . All of this suggests that states are willing to use cyber-weapons to impact the banking system and to engage in open cyber financial warfare."

"The Iranian government has entered the fray in response to the financial assault on its economy and currency. In September 2012, a Middle Eastern hacker group . . . conducted a massive denial of service attack against the electronic banking operations of JP Morgan Chase, Citigroup, PNC Bank, Wells Fargo, US Bancorp, and Bank of America."

"During the ‘Flash Crash' episode of 2010, a trading algorithm dumped 75,000 futures contracts valued at $4.1 billion on the market in a twenty-minute period. The losses were staggering, causing a 600-point fall in the Dow and erasing $862 billion from the value of equities before an automatic circuit breaker paused trading. Although the mass volume of such trading provides a buffer against manipulation, the sheer speed and anonymity of the cross border trading across asset classes increases the risks and the potential for markets to be manipulated and cornered by savvy criminal and nefarious actors–for profit or other purposes."

"Thus, strategies to manipulate markets could focus principally on shaping the perception of the markets and then leveraging the market swings to profit or destroy value. It is in part for this reason that the Securities and Exchange Commission (SEC) put new regulations in place to prevent uncovered short selling such as that seen during the financial crisis of 2008."

"The coming financial battles may find their most serious theater and articulation in cyberspace, with the vulnerability of the financial sector and the international system of trading and commerce potentially at risk."

[Here are some posts that we made with a very similar argument:

The Cyber Threat is another aspect of Global Economic Warfare

Zarate concludes this section with a message we continue to carry (pages 417-421):

"The US intelligence community should reframe how it treats economic security matters by creating a new national economic security discipline. This would require institutionalizing private outreach and eliminating current stovepipes between economic, financial, and commercial expertise and the national security community."

"A new economic security approach requires a new paradigm.. This involves an evolution from the classic, state-based national security actions toward deeper involvement of the private sector in arenas previously confined to the halls of government, with a commensurate and widening appreciation within governments of the power of markets and the private sector to influence international security."

"The financial wars are coming. It is time to redesign a national economic security model to prepare for them. If we fail to do so, the United States risks being left vulnerable and left behind as other competitors race toward the future."

We agree with almost all of this. The one  aspect with which we disagree is that the financial wars aren't coming. They are here right now. And, the Russians agree:

‘The world IS in a state of financial war' – Russian presidential advisor.

It's time to wake up and follow the outline of response that Zarate shared. We must redesign the national security paradigm–with a financial/economic model at its heart–before it is too late.