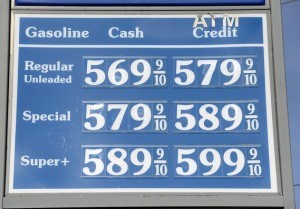 Following our last post on Environmental Rules, there has been an abundance of corroboration. A major attack point for our economy is in energy, as demonstrated by all-time high gasoline prices in California. By choking off access to domestic energy, it is possible to hurt our own energy growth,  foster dependence on foreign sources, and drive up the cost of almost everything that requires energy. In other words, for us it is LOSE/LOSE/LOSE. In our last post, and an earlier one, we explained how environmental rules could be used as economic weapons. We also showed serious links between such rules and major oil producers such as Russia and the Middle East.

To demonstrate how serious these rules can be, consider the coal industry. Here is an example as reported by AP in NewsMax:

Coal country is hurting, and the people who live there want the whole nation to know it.

Thousands of miners have been laid off this year across Kentucky, Virginia and West Virginia, many with little hope of getting their jobs back as power plants and the coal mines that once fed them shut down. Now the families, friends and business operators who depend on those miners are planning a multi-state show of solidarity they hope will be heard in Washington, D.C., and beyond . . .

The article goes on to explain the sheer devastation on entire communities. Of course, this is not foreign economic warfare, per se, as President Obama was quite clear in his intentions to bankrupt the coal industry as shown in this YouTube video:

As a domestic political question to be decided by Americans, we have a choice in regard to what energy we should use. When that decision is purposely influenced by foreign sources to make us dependent on their energy supplies, or to bankrupt us entirely, then that is economic warfare.

This blog was among the first to point out the efforts being waged by foreign energy producers to keep America dependent on their supplies. Now, it seems that others are catching on to this reality as well. Investor's Business Daily, for one, published a very strong piece along these lines. Here are some excerpts:

Geopolitics: What do Hugo Chavez, Vladimir Putin, Gulf oil sheiks and President Obama have in common? They all want to halt the U.S. energy revolution in fracking. No wonder so many of them are endorsing Obama.

Presidential candidates always attract a few embarrassing endorsements, but the numbers of rogue dictators lining up to call for Obama's reelection is striking.

Obama "is an honest man who really wants to change much for the better," cooed Russia's President Vladimir Putin to RT state television after hurling verbal thunderbolts at Mitt Romney.

It was "widely viewed as Putin's most direct endorsement of Obama," the Moscow Times reported.

Venezuela's President Hugo Chavez also weighed in: "I hope this doesn't harm Obama, but if I was from the United States, I'd vote for Obama," he said, since both were "fighting the extreme right."

Chavez also noted that Obama said: "Venezuela is no threat to the interests of the United States."

Such endorsements from dictators are very much a pattern for Obama, and an unusual one, given that the world's tyrants don't endorse foreign leaders unless their self-preservation is at stake.

Obama fits that bill,
because the No. 1 goal these dictators all have is to slow or halt U.S. fracking, which poses a mortal threat to their fiefdoms.

The U.S., remember, stands on the edge of an energy revolution with so many technologically new and innovative ways to extract its available oil and gas.

Combined with a massive bounty in nature, it stands to become "the Saudi Arabia of shale" if fracking takes off. That's a threat to petrotyrants' global energy dominance and use of energy for political power.

Don't think it's not already happening . . .

The Investors.com article gives specific examples of anti-fracking efforts being pushed by foreign energy producers who fear American energy independence.  All of this explains why energy has become the latest front in Economic Warfare. Even the Chinese are at play by hacking energy companies:

Opposition leaders in Canada suggested a string of cyber security threats to domestic companies might be the work of Chinese hackers. Twice last week, the Canadian government confirmed two separate companies -– both in the energy sector — were the target of cyber-attacks. In the United States, meanwhile, the Obama administration said national security interests trumped energy concerns and blocked a Chinese company from constructing wind turbines near a Navy installation in Oregon. While the Chinese military isn't the overt threat like the Soviet Union was, Beijing's rise as an economic power has seemingly sparked a war of economies.

The Canadian government last week confirmed that two energy companies were the target of a cyber-attack believed to have originated from China. Though Beijing denied it was responsible for the attacks, opposition leaders in Canada said there was cause for concern given the pending Chinese takeover of Canadian energy company Nexen.

Nexen in August backed a $15-billion takeover bid by China National Offshore Oil Corp. Canadian Prime Minister Stephen Harper has lobbied for Chinese investments in his country's vast oil and gas riches. Those ambitions could be derailed, however, given political divisions in Canada and Dewar's comments may further exacerbate tensions following a Chinese leader's statement that Beijing can't do business in Canada if deals like Nexen become politicized.

Just for understanding, it was recently reported that a drunk trader was able to spike the price of oil. Can you imagine what can be accomplished by major players such as Russia, Venezuela, Iran, and the Middle East if they focus on it?

There should be no doubt that energy is a major "front" in the Economic War underway. We must as a society recognize that such a war has already started and make the right decisions in how we respond. This means reviewing environmental restrictions in light of their economic impact, finding new ways to produce domestic energy, and countering foreign threats and influence.