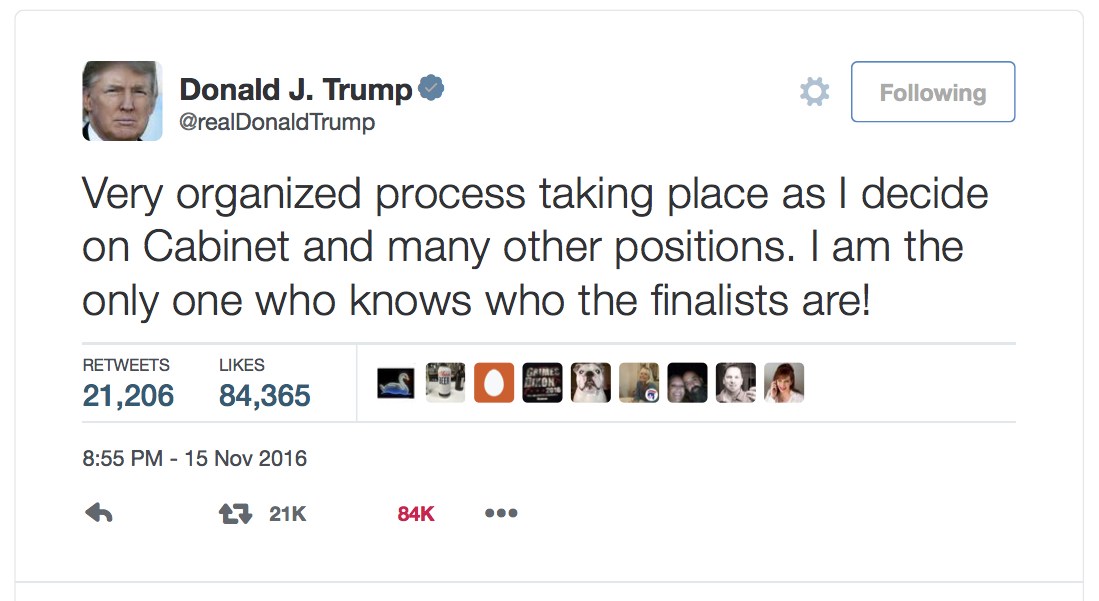 The media is going nuts over President-elect Trump and his transition. It seems as if nothing is going right for the elitists who like to tell us what to think. That's good news for America! It comes on the heels of what I believe was God's divine intervention for America with last week's election. We must give glory where it's due and it belongs to God.

I've just been on a National Security call with key members inside the Trump team. They assure me that the process is going more smoothly than the media is claiming. They are getting the support and decisions they need and the decisions are good.

This is the view from The New York Times:

Trump's Wild Ride With the Press as Transition Turmoil Continues

All eyes may be on Trump Tower as the presidential transition team holds off on nominations for crucial cabinet posts, but President-elect Donald J. Trump appears intent on beating the press. Meanwhile, transition turmoil continues.

Rather than delve into the falsehoods and attacks, let me just restate that things seem to be going pretty well. There's no doubt that the media is attacking with a vengeance in a desperate attempt to cause disarray and keep good people out who could make a real difference. They want the President-elect to put the same old establishment back into power. So far, the media seems to be failing.

One perfect example of how the media is attempting to sabotage good people happened the other day with my friend and true patriot Clare Lopez. Huffington Post went after her aggressively but I am hopeful it will be to no avail.

Clare Lopez, reportedly on the short list for an advisory position in the White House, thinks Muslims are infiltrating the government

Lopez is the vice president of the Center for Security Policy, a Washington, D.C.-based think tank that focuses on the threat of Islamic jihad. She was on a short list of names that the Daily Caller reported as coming directly from the Trump transition team.

According to Lopez's biography, she spent 20 years working for the Central Intelligence Agency before she became a popular writer for conservative websites like Breitbart News and World Net Daily. She served as an adviser to the presidential campaign of Sen. Ted Cruz (R-Texas), and while she didn't hold an official post within Trump's campaign, the president-elect regularly cited her work to support his anti-Muslim positions.

Lopez and Frank Gaffney, the president of the Center for Security Policy, have both promoted the idea that the executive branch is teeming with Muslim Brotherhood members and supporters. Their conspiracies became popular during the age of Trump, with members of the alt-right spreading the discredited theories in order to justify their support of the president-elect …

The Southern Poverty Law Center, a nonprofit organization that works to combat hate and discrimination, has labeled Lopez's organization an anti-Muslim hate group. Heidi Beirich, who directs SPLC's Intelligence Project, told The Huffington Post that Trump's reported consideration of Lopez for a White House job was a "tragedy," and "means nothing good for the Muslim American community."

"We don't want members of hate groups who have raging bigoted ideas about Muslims in the White House," said Beirich. "That's the last place they should be."

WOW! How could they be both so right and so wrong at the same time? If you start with a rational worldview, you understand that there are real threats and Islamofascists HAVE attempted to infiltrate the government (and will try to infiltrate the Trump team). To deny this is to bury your head in the sand or to assume that our enemies are totally inept (which is ridiculous).

When you encounter a religious ideology in the 21st century that promotes killing apostates, stoning women to death for sexual indiscretions, and brutally slaughtering gays; an ideology that instigates wars to impose its inhumane value system upon others; an ideology that not only condones but encourages its soldiers to take female war prisoners as sex slaves — and when you contemplate the number of terrorist acts conducted in its name — then you begin to realize that feeling some trepidation in the face of that religious ideology is not only rational, but probably advisable from a purely survival instinct standpoint.

It is definitively not an irrational response, and therefore by definition not a phobia. In fact, to not recoil in horror from such an ideology must be seen as a disease that needs to be treated . . . A deeper analysis of this situation reveals that the real problem is actually "Islamophilia" not "Islamophobia."

"Islamophilia" has taken a variety of forms, such as insisting that Islam is a religion of peace, pronouncing Jihad a peaceful endeavor, and claiming that Shariah laws are compatible with the U.S. Constitution — despite overwhelming evidence against such unfounded assertions, which contradict both historical facts and current mainstream Islamic teaching . . .

I contacted Clare upon seeing and she just laughed. She has not been contacted for a job (yet) but would be fantastic in any position. But the crazed Huffington Post, which should be against Islamofascism as it opposes any sense of liberal values, demonstrates the incredible hypocrisy of the left.

Today's news contained one piece of REALLY GREAT NEWS. We are told that the demotion of Chris Christie and replacement by VP-elect Pence is evidence of "turmoil." We see it as part of the effort to oust lobbyists and drain the swamp.

Personally significant is the apparent ouster of Mike Rogers from the National Security team. I encountered Congressman Rogers when he was chairman of the House Intelligence Committee and I was warning Congress about the risks of economic warfare. He and his staff appeared dismissive, almost unwilling to listen. This was a notable and serious departure from the reception received at the Pentagon including by ONA, DARPA, DIA, and SOLIC. It would have been one thing had he or even his staff bothered to hear me out and then decided there wasn't a problem. But that was not the case at all.

Mike Rogers was also dismissive of questions about Huma Abedin raised by Michele Bachmann, Louie Gohmert, Trent Franks, Thomas Rooney, Lynn Westmoreland and others in a letter to the State Department IG. Wikileaks and Anthony Weiner's laptop have no doubt since justified their concerns. Mike Rogers' dismissiveness of  our concerns made America weaker, not safer.

Perhaps even more important and encouraging was the announcement in The Wall Street Journal that our friend Frank Gaffney will be joining the transition effort just as Rogers departs.

WASHINGTON—Another round of staff changes buffeted President-elect Donald Trump's transition team Tuesday amid resistance from within the Republican Party over a top choice for secretary of state.

Mr. Rogers was told he was being replaced because everyone who was brought in by New Jersey Gov. Chris Christie, the transition team's original chairman, was being ousted, according to a person familiar with the conversation. Frank Gaffney, a Reagan administration veteran, was brought in to assist on national security issues, as has GOP U.S. Reps. Pete Hoekstra and Devin Nunes.

We see this as extremely good news. Frank is a great friend. In fact, he interviewed me the day after the election to find out what I thought needed to be done when Donald Trump became President. I joined some true luminaries on his program that day.

DIANA WEST, Author of Death of the Grown Up and American Betrayal:

SETH CROPSEY, Deputy Undersecretary of the Navy in the Reagan and Bush administrations:

KEVIN FREEMAN, Senior Fellow at the Center for Security Policy:

In addition to Frank Gaffney, Clare Lopez and their possible role with advising President-elect Trump, I have been privileged to know, work with, or advise at one point, other great people working with the Trump team like Lt. General Mike Flynn and Dr. Peter Navarro. I know them to be brilliant people with a true love for America and deep insight into the national security risks and economic issues we face. My effort has to bring these issues together for consideration.

I am heading to DC tomorrow and am privileged to there advise a group of powerful conservatives on what the Trump team needs to do in the first 100 days. I will also be able to connect individually with several key members of the transition team. To date, I've received nine calls from VIPs I truly respect either asking for my support or volunteering to support me in remaining involved in some way with the new Administration.

It was around eight years ago that our team first began the process of awakening America regarding the very real threat of Economic Warfare. It seems that the dark of night may have finally come to an end. And joy comes with the morning!