Growth MUST BE a National Security Priority

The regulatory state that was created under Presidents Obama and Bush is beyond excessive. It is a national security risk in its own right as explained by Jim Harper at the Competitive Enterprise Institute on April 4th. Harper's analysis is accurate and I will take it a step further.

Here is the problem. Our economy has barely grown this century. President Bush pushed for serious additional regulation that resulted in mounds of paperwork and slower growth. President Obama took the regulatory regime to an entirely new level. Over 80,000 pages of new Federal regulation were created last year alone–the highest ever recorded. President Obama did not have even a single year of 3% GDP growth on his watch. This is virtually unprecedented as most Presidential terms experienced average growth above 3%. It's pretty simple. When you focus more on the growth of government than the growth of the economy, bad things happen. 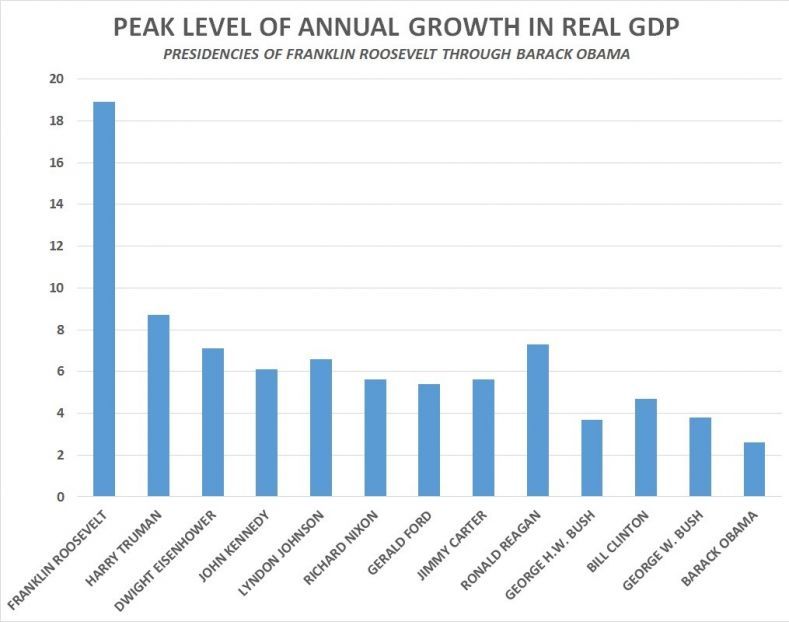 The chief reason for the poor performance of the American economy is the federal government. Since the dawn of the Obama administration, Washington has greatly increased spending, racking up trillions of dollars in debt. The Federal Reserve made unprecedented interventions in monetary policy (quantitative easing—QEI through QEIII); and Dodd-Frank and the Affordable Care Act (to name but two) placed many onerous rules and regulations on capital markets, burdening businesses both large and small. One reaction: the revival of anti-trade policies in official Washington. 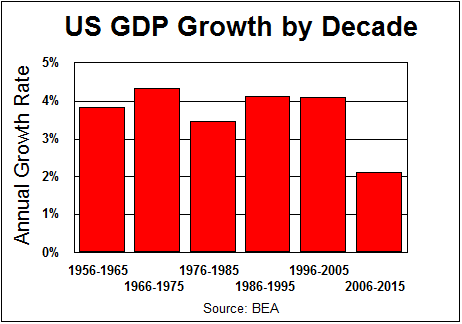 The cumulative cost of regulations is enormous. The cost to the economy in 2014 alone approached $2 trillion. Since about 1950, the cumulative cost has been to reduce our economy and the average family's earnings by about 75% from their potential. In other words, we have just 25% of the wealth we might have enjoyed had regulations been kept to a minimum level similar to those in place in 1950.

One thing to remember is that most growth historically has come from small business. But small businesses are not equipped to handle the regulatory state. In fact, more regulation gives big business an undeniable strategic advantage over small business. Just imagine how much better equipped a well-capitalized Starbucks is than a local startup coffee shop in handling labor laws, minimum wages, or virtually any tax or regulation. As a result, the first wave of new regs actually helped big business and was applauded. Corporate profits rose but the average person struggled. The most recent wave of regulations, however, has actually hampered all business. Even Jamie Dimon of JP Morgan Chase has admitted that regulations are strangling our growth potential. Keep in mind that Dimon is CEO of one of Wall Street's biggest banks and well known as friendly to Democrat politicians.

Dimon, whose letter to shareholders is perhaps the business world's second most-read chairman's letter after Warren Buffett's, writes that "By some estimates, approximately $2 trillion is spent on regulations annually (which is approximately $15,000 per U.S. household annually)." And he continues: "…it is an understatement to say improvements could be made. The regulatory environment is unnecessarily complex, costly and sometimes confusing. No rational person could think that everything that was done was good, fair, sensible and effective, or coherent and consistent, in creating a safer and stronger system.

Here's the reality. Our debt has grown exponentially and now approaches $20 trillion. We face huge bills coming due down the road in the form of future entitlements–maybe over $200 trillion in total. It is literally just a matter of time on our present course before we face a massive financial crisis. That's not an opinion. It is the conclusion of the non-partisan Congressional Budget Office and any honest economist. We cannot tax ourselves enough to pay what will need to be paid. We cannot cut spending rapidly enough to avert crisis. The only thing we can do is literally change the circumstances by growing much faster than we have so far this century.

Now here is the second truth. A strong economy is perhaps the most essential ingredient for our nation's security. It is not the only necessary ingredient. But it may be the single most important (that is after placing our trust in Almighty God). We have made this case multiple times. The American Center for Democracy put it this way:

The national security of the U.S. relies heavily on the robustness of economic growth. The faster the economy grows, the more revenue pours into state and federal government coffers, feeding greater security. More importantly, the President may fund additional defense and intelligence requirements without imposing politically sensitive cuts to domestic programs.

The left bristles at this notion. They don't want to admit that national security requires growth. They prefer to sell America on a "nanny state." What they won't tell you is that by trying to control the economy, they are eliminating the chances for prosperity and growth. Worse still, over time they are destroying the nation's security as well. The Soviet Union could not grow rapidly enough to keep up with American military spending. In other words, it was economics in large part that won the Cold War.

The left also bristles at the notion of economic freedom. They would love to imagine a socialist utopia where workers are all massively paid and the government makes certain everything is safe from their parental view. Unfortunately, that is a fantasy, proven so once again by the collapse in Venezuela. Socialism ultimately leads to dictatorship and a loss of personal freedom as explained by Friedrich Hayek in The Road to Serfdom. Why is this important? Because the loss of economic liberty coincides with the loss of personal freedom. Our nation was built on both.

It is absolutely essential to understand that economics will most likely determine the outcome of the next war. The Chinese understand this. Even left-leaning think tanks like the Carnegie Institute know it although they are loath to admit it. It was relatively easy, for example, to draw an obvious conclusion from their report on China. If China were to grow much more rapidly than the United States over the next few decades, the Chinese would dominate the Pacific. If the United States' economy were to grow more rapidly relative to China's, however, we would remain dominant. It's really pretty simple. Many fear that if China dominates the Pacific and displaces American hegemony, it could lead to war.

It should be abundantly clear that a serious fiscal or financial crisis in the United States would diminish our ability to project power. Just consider the British. When their economy was dominant, they were the more powerful military force. A relative decline in the British economy has also meant a relative decrease in military power. The Chinese understand this fact. The Russians do also. We must grasp this truth.

Our economy is not guaranteed to be permanent, especially if we continue to adopt anti-growth policies. We have problems and we need strong growth to overcome them. This is not just a Wall Street "fat cat" issue. Without growth, we face a pension crisis that would devastate retirees and working class Americans. Danielle DiMartino Booth wrote an important piece titled "Pension Crisis Too Big for Markets to Ignore." She points out that pension obligations are now almost 10 times higher now than just ten years ago for state and local governments. The only hope is growth. And we cannot expect to grow by borrowing more. That will be counterproductive. In fact, recently it has taken $4 in debt to produce $1 in growth. Given our excessive debt now, that is not a viable solution.

What we need is a strategy for growth. We outlined the essential elements in the book, Game Plan. The key things are repatriation of American corporate earnings held overseas, allow our domestic energy industry to prosper, reduce regulation, and reform the tax code. Those are all essentials for growth. They are also essentials for national security.

[NOTE:  We are not against all regulation. Keep in mind that we argue for sensible regulation, especially in the financial services sector. For example, the cost-free uptick rule served our nation proudly for decades in preventing depression-inducing market collapses. It was so simple, basically stating that speculators could only sell a stock short if the prior trade was an "uptick" in price. This prevented the machine-gun like short selling that took place in the 1929 collapse and was evident again in 2008. So when was the uptick rule put in place? After the horrific bear market that started in 1937. When was it removed? In the summer of 2007, just before the horrific financial collapse. Certainly there were bear markets in between but I would suggest their nature and severity was lessened by the uptick rule. When the rule was repealed, High-Frequency Traders had a field day. A substitute rule was put in place in early 2010. While the new rule is more complicated than it needs to be, it has nevertheless seemed to be effective in reducing manipulations. All of this to say that we believe in proper regulation.]