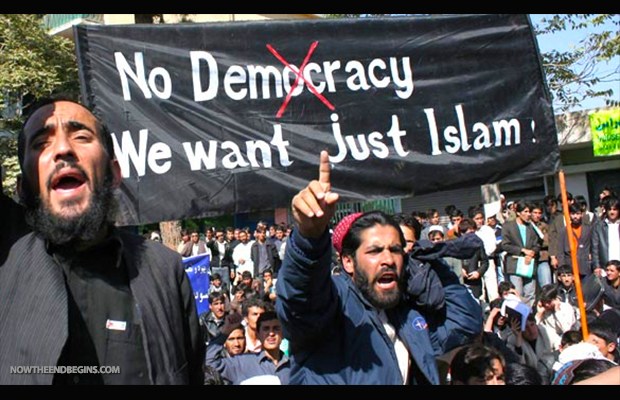 The immigration issue continues to grow. We've already covered critical examples where immigration policy may be intertwined with economic warfare. What's happening in Europe today is also finding its way to America and the implications are serious. Even typically tolerant Sweden is growing increasingly concerned by the wave of immigration.

Rather than recap, just check out our previous posts:

Some believe that the wave of immigration has the political purpose of establishing a permanent Democrat majority. From a Conservative Review editorial (October 15, 2015):

That may well be the political reasoning and is concerning enough. But should we sacrifice our nation's security?

We need to be aware that we don't have reliable systems to vet the refugees coming from Syria or immigrants coming over the border. Because the data is unavailable, we can't really tell who might be a problem and who might not according to FBI Director James Comey.

We know that Europe has experienced an influx of "Militiamen" loyal to Iran. This has been documented and reported by the Investigative Project on Terrorism:

European Influx of Militiamen Loyal To Iran Could Pose Problems

Evidence uncovered on social media indicates that members of Iranian-trained Shiite militias may be entering Europe as refugees, a London-based Iraqi émigré group says. The Foreign Relations Bureau – Iraq (FRBI) identified images of 48 men on Facebook and Twitter who it says fought with Iranian-trained Shiite militias in Iraq and now are in Europe.

FRBI came into existence in 2014 and promotes women's rights, equality, Iraqi independence from foreign control, and a non-sectarian approach to governance.

FRBI's list shows pictures of militiamen in uniform and carrying weapons. Alongside those images are pictures showing the same people wearing Western street clothes and standing in places such as Germany, Sweden, Belgium, Greece and Finland. This same list also includes 16 people belonging to Iraq's security services who similarly made their way to Europe and who FRBI accuses of crimes against the Iraqi people.

These militias engaged in serious human-rights abuses in places like Tikrit after they ousted the Islamic State, and Iraqi security forces similarly engaged in unlawful killings, according to Human Rights Watch (HRW). FRBI refers to HRW's research about human-rights abuses in Iraq as a reason why these men should not have been allowed into the E.U.

Images of these fighters began surfacing on social media in August and early September, said FRBI spokesman A. Al-Mahmoud….

This also has U.S. Customs officials concerned. The ease in which these Shia militiamen have entered Europe raises fears that they will be able to travel to the U.S. on E.U. passports, said one Immigration and Customs Enforcement (ICE) agent who spoke under the condition of not being named. Anyone with a passport from places like Germany, Sweden can easily get on a flight to the U.S. without the sorts of hassles they might experience traveling on an Iraqi or a Syrian passport.

To CONTINUE READING at IPT….

Yes, the same Iran that chants "Death to America" and has plans to take down the American electric grid now has loyalists entering Europe with an easy path to the USA.

Iran is on one side of the Syrian war, supporting the current regime. Some of the opposition is ISIS, another radical group using immigration to spread influence. We know that ISIS is the prime suspect in terror attacks in Turkey. We also have reports from Texas officials that ISIS members may have crossed the southern border into Texas. From Independent Journal (October 6, 2015):

Steven McCraw, the Director of the Texas Department of Public Safety, was speaking at the annual Texas Border Coalition meeting in Laredo when he was asked if he thought any ISIS members had been nabbed at the Texas-Mexico border.

McCraw answered: "Individuals that come across the Texas/Mexican border from countries with a known terrorism presence – and the answer to that is yes." McCraw's statement isn't the first revelation that members of terror groups might be sneaking into the U.S. from Mexico.

Given that, is it simply a matter of time before radicals on either side of the Syrian war infiltrate the West to spread damage?

We have CNN reporting that ISIS is already attacking the American electric grid. So far, the attacks have been unsuccessful but the strong intent is there. And the risk is that more sophisticated capabilities are available for a price.

"ISIL is beginning to perpetrate cyberattacks," Caitlin Durkovich, assistant secretary for infrastructure protection at the Department of Homeland Security, told company executives. Investigators would not reveal any details to CNNMoney — or cite evidence of specific incidents. But they did say the attacks by the Islamic State have been unsuccessful. Terrorists are not currently using the most sophisticated hacking tools to break into computer systems and turn off or blow up machines.

"Strong intent. Thankfully, low capability," said John Riggi, a section chief at the FBI's cyber division. "But the concern is that they'll buy that capability." Indeed, hacking software is up for sale in black markets online. That's often how mafias acquire the cyberweapons they use to break into companies and steal giant databases of information they later sell to fraudsters. The FBI now worries that the Islamic State or its supporters will buy malicious software that can sneak into computers and destroy electronics. An attack on power companies could disrupt the flow of energy to U.S. homes and businesses.

Last year, ISIS raked in $1 billion in cash and $50 billion in Iraqi weaponry. With oil revenues and looting, they have more than enough money to buy the most sophisticated cyber-hacking weaponry. Does this mean it is only a matter of time until they can take down our grid? Or, what happens if refugees come to America but remain loyal to ISIS or Iran. Without proper vetting, how would we keep them out? And, once here, could they infiltrate sensitive jobs or areas that could make a cyber or physical attack more effective, probing for weaknesses on our soil? More cyber attacks come from local origin than you might believe. Having people on the inside can make attacks much simpler and far more effective.

At the Democratic debate last week, Senator Jim Webb said that the greatest "day-to-day" national security threat to the United States was cyber warfare. The threat to the power grid is just one example, whether by cyber, EMP, or physical attack.

Every four days there is some sort of attack according to a USA Today report (March 24, 2015), whether physical or cyber. This video demonstrates just how serious the issue truly is.

Infiltration by radical immigrants simply intensifies the risk. From the Washington Examiner (September 3, 2014):

Former top government officials who have been warning Washington about the vulnerability of the nation's largely unprotected electric grid are raising new fears that troops from the jihadist Islamic State are poised to attack the system, leading to a power crisis that could kill millions.

"Inadequate grid security, a porous U.S.-Mexico border, and fragile transmission systems make the electric grid a target for ISIS," said Peter Pry, one of the nation's leading experts on the grid….

"By one estimate, should the power go out and stay out for over a year, nine out of 10 Americans would likely perish," said Frank Gaffney, founder and president of the Center for Security Policy in Washington.

In Syria, Iran and ISIS are on opposite sides. In the cyber-economic war against America, however, they seem to have the same purpose–taking down America's electric grid. So, is it such a good idea to allow un-vetted immigrants into our country?