Two years ago,  The New York Times published an article titled The Real Problem with China. The article had one key phrase that rings true today:

The Real Problem With China

For the United States, the No. 1 problem with China's economy is probably intellectual property theft. 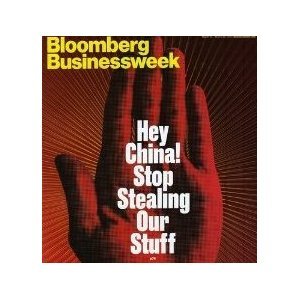 Over the past decade, Chinese intellectual property theft has skyrocketed. For example, we have seen computer hacking to steal trade secrets, outright spying, and patent coercion. This is clearly economic warfare and should be addressed. The problem is that in many cases the theft goes undetected. In other cases, the theft is accomplished through legal maneuvers. More recently, Chinese lobbying was part of the so-called "patent reform" in Congress.

Unfortunately, the situation has only worsened in the past two years as noted by a Reuters article, excerpted below:

It "has risen substantially in importance over the last year, year and a half," Waterman said at an annual hearing on China's compliance with World Trade Organization rules.

In one recent case, two Chinese citizens in Kansas City, Missouri, were charged with attempting to pay $100,000 for stolen trade secrets from Pittsburgh Corning Corp, an affiliate of PPG Industries Inc (PPG.N) and Corning Inc (GLW.N), at its Sedalia, Mo. facility. The Justice Department said the pair were trying to purchase the trade secrets so a rival plant could be opened in China.

Earlier this year, The New York Times reported that an Austrian-based employee of the Massachusetts wind-energy company American Superconductor (AMSC.O) stole intellectual property from the firm and sold it to Chinese wind turbine manufacturer Sinovel (601558.SS) for $1.5 million.

Peter Dent, a vice president at Electron Energy Corp, told the government panel that both large and small U.S. companies face "persistent and increasingly complex cyber-attacks (from China) in an effort to steal intellectual property from company computer networks."

Defending trade secrets against the attacks was "very difficult" and a costly drain on resources, he said.

At one point, our response was to try to use patent laws to protect our corporate Intellectual Property. Unfortunately, some believe that Chinese corporations found a way to beat us at our own game. Have the Chinese learned to use our patent system against us? Here is a blog post that suggests they have:

China's Patent Strategy Isn't About Innovation; It's An Economic Weapon Against Foreign Companies

John Bennett points us to an article in the NY Times that claims to be about how China is gearing up to be an innovation powerhouse rather than just known for "copying." Of course, the actual focus of the article is about how China is trying to get a lot more patents. In fact, we covered this very issue back in October, highlighting how China has set an "innovation policy" that appears much more focused on getting more patents, rather than increasing innovation. There are, of course, some people who still think that the number of patents is a proxy for innovation, but this claim has been debunked so many times, it's just kind of cute when people still bring it up.

So, could it be that thanks to sustained US pressure on China to "crack down" on infringement, that China has suddenly come to believe that patents equal innovation? Last month, just before some diplomatic meetings between the US and China over trade issues, US officials did their usual misleading grandstanding about how China doesn't do enough to "protect" US intellectual property. And, in response, Chinese officials did their usual song-and-dance about how they'rereally serious about intellectual property now, and we should stop worrying.

Of course, as we've pointed out, China seems to be much more aggressive with intellectual property lately, but not in the way the US wants. That is, it's been using patent and copyright laws to make life more difficult for foreign companies, specifically US companies. And, in reading through the details of that NY Times article above, it looks like they're planning to do more of the same.

The strategy that's being described (get a TON more patents in China and all around the rest of the world) is not a strategy for innovation. It's a strategy to stop others from innovating. It seems that China may understand patents a hell of a lot better than even officials in the US. And, incredibly, US officials seem to be falling for it. The Chinese must be laughing with glee to hear USPTO director David Kappos naively declare that:

"The leadership in China knows that innovation is its future, the key to higher living standards and long-term growth," Mr. Kappos says. "They are doing everything they can to drive innovation, and China's patent strategy is part of that broader plan."No, they're not driving innovation. They're seeking out weapons to use against foreign companies, as they've been doing for the past few years. That such an obvious move is totally missed by someone like Kappos suggests the level of ignorance of our own patent officials.

The US has taught China well how patents can be used as a weapon to hinder innovation, and it seems clear that China's latest strategy is to use patents as an economic weapon. It's not about improving innovation at home. The Chinese will continue to copy and ignore patents whenever it wants and whenever it believes it will be helpful to the local economy. But it will seek to stymie innovation around the globe by using patents as monopolies that can set up both tollbooths and huge hurdles for innovation from foreign competitors. And the US is playing right into this strategy by believing that patents, by themselves, are some sort of indicator of innovation and pushing China to "respect" patents even more. It's not hard to see how this is going to backfire badly on the US, including the companies who have urged on this strategy.

The scariest part is that our patent laws change from "first to invent" to "first to file" next month. This unfortunately may favor those who covertly practice IP theft. Imagine if an individual invents something new that is uncovered by spying. If the spy isn't caught and has the resources to file first, the inventor loses out. Many believe that this so-called patent reform is simply a means for China to steal more in the future.

Here is a description of the new law from Fast Company:

The most widely discussed feature of the AIA is the impending replacement of the longstanding "first-to-invent" system with what is commonly–and somewhat inaccurately–called a "first-to-file" system. The first-to-file provision will apply to patent applications with an effective filing date of March 16, 2013, or later.

Now, here is the concern as articulated by Phyllis Schlafly:

More and more dangerous effects of the proposed changes to U.S. patent law (S. 23, H.R. 1249) keep emerging, especially since the hearings failed to hear from any real inventors. The proposed bill is unconstitutional, an attack on our national security and an offense against the rule of law.

By awarding patents to the first to file an application with the bureaucracy instead of to the first to invent, the proposed bill will deprive inventors of their constitutional property right set forth in Article I, Section 8. of the Constitution. U.S. law has always awarded patents to real inventors, not to paper-pushers.

An important letter sent to House Speaker John Boehner, R-Ohio, from the 15-member Inventors Network of the Capital Area describes how the proposed patent bill "threatens all individual and corporate Research & Development in America, the backbone of our national defense and economic security." Here is how this racket will work.

Inventors don't usually give birth to their inventions like the Greek goddess Athena, who was born fully grown and fully armed out of Zeus' head. The Wright Brothers required many experiments as they tried wings with different angles before they were ready to patent heavier-than-air flight.

The proposed patent bill will enable Chinese hackers to steal U.S. innovation secrets while they are in development, then file an application with the U.S. Patent Office under first-to-file, and thereby own new U.S. technology instead of merely stealing it. Owning the patents will enable China legally to take away ownership rights and profits from Americans who actually invent new technologies.

Defense technologies would be a prime target of this threat. The first-to-file provision of the Patent Act would become the most effective weapon in China's arsenal and would threaten our national security in a new and ominously dangerous way.

National security expert Adam Segal testified before the House Foreign Affairs Subcommittee on Oversight and Investigations about the dangers from Chinese cyber-espionage, massive theft and piracy, and the policy called "indigenous innovation," which requires technology transfer in return for market access. He said, "It is clear that the United States must do more to defend itself."

Since 1870, U.S. law has provided a grace period of one year between the date the invention is disclosed and the date the patent application is submitted. This grace period gives an inventor a year to perfect his invention, to sort out better from inferior features, to raise capital, to gather partners and to field test the invention before the deadline for filing a patent application.

This grace period is very important to independent inventors, small companies and startups. It permits them to delay the costs of filing until the invention is evaluated, a decision is made as to whether it is worth spending money on and investment capital is raised.

The proposed bill redefines the grace period in a way that is hostile to small inventors and small businesses because it states that any disclosure of the invention by anyone other than the inventor at any time, even within that first year, will bar the real inventor from getting a patent. Weakening the grace period thus poses an enormous risk to the most innovative sectors of our economy.

Another outrage of the proposed patent bill is the provision that subjects to expensive new litigation and retroactively attacks the patent on the check-clearing system, which enables banks to return photo-images to their depositors rather than actual canceled checks. This new system saves the banks millions of dollars because they no longer have to truck the checks physically to other banks to be cleared.

This system was created by inventor Claudio Ballard, who received a patent for it, survived post-grant review and won expensive court battles when he defended his patent against infringement by the banks. After all that, the new patent bill (ignoring the principle of res judicata — the thing is already decided) sets up an unprecedented procedure to overturn the patent office and court decisions, giving the banks another chance to invalidate Ballard's patent.

A 15-page letter to Congress from professor Richard A. Epstein, the nation's foremost authority on property rights, explains how the "stacked procedures of Section 18" in the bill are designed to let banks use Ballard's invention without paying him for it. Epstein, who wrote the book on "takings" under the Fifth Amendment, says Ballard deserves just compensation for the use of his patent.

Altogether, the proposed bill, mischievously called "patent reform," is a bad, dangerous and dishonest bill that must be defeated if we care about respecting the Constitution, inventors' property rights and American leadership in innovation.

The bill passed and we are now about a month away from its implementation. If Mrs. Schlafly is correct, China will have a powerful new weapon of Economic Warfare that conforms to the approach outlined in the 1999 book written by the PLA, Unrestricted Warfare. It's time we recognized that this is a global economic war and started to respond.