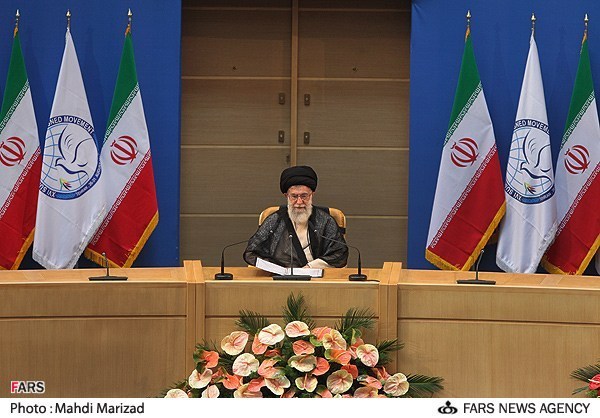 We have previously noted the strange connections between the Occupy Movement in the United States and those seeking to establish an Islamic Caliphate around the world. At first glance, an anti-Capitalist movement starting in New York might appear to have little in common with an Islamic Regime. But, upon deeper inspection there are a number of common ties.

Here are some of our previous posts that disclose these ties:

Who is Behind the Occupy Movement?

Venezuela and Iran, Together Again

Essentially, the Occupy Movement and radical Islam have several points in common. First, there is a mutual disdain for Capitalism as a system. The Occupiers hate the wealth disparities. Many Occupiers are blatant Marxists (although some are simply fed up with Wall Street corruption). The Islamists hate the riches of the Western powers produced by capitalism. They view capitalism as evil, opposed by Shariah law. Second, there is an anti-Jew undercurrent in Occupy that is prevalent with Islamists. Now, not every Occupy sympathizer is anti-Jew. But, there is sufficient evidence to make the case of a serious anti-Jew element. Third, there appear to be some funding ties. Fourth, there is the revolutionary quality of both Occupy and the Middle East regime change efforts. Even though all of this is factual, a number of reality deniers with obvious political bias have argued strenuously that there is no connection whatsoever. Well, this week the public release of Iran's Supreme Leader made clear that there are strong sympathies between those who seek to impose Islam and those who seek to upend our economy in the name of fairness.

Here is a link to the entire speech as published by the FARS news agency in English (FARS is the official news agency of Iran):  http://english.farsnews.com/newstext.php?nn=9106060662.

Here is the key quote:

Friends, this flawed and harmful situation cannot continue. Everybody has become tired of this faulty international structure. The 99 percent movement of the American people against the centers of wealth and power in America and the widespread protests of the people in Western Europe against the economic policies of their governments show that the people are losing their patience with this situation. It is necessary to remedy this irrational situation. Firm, logical and comprehensive bonds between member states of the Non-Aligned Movement can play an important role in finding a remedy.

Here is an analysis of the speech posted at Gather.com by Renee Nal:

Ayatollah Ali Khamenei, the "Supreme Leader" of Iran, praised America's "Occupy Wall Street" movement on Thursday, in an address to the Non-Aligned Summit, a gathering of 120 nations now taking place in Tehran.

"The 99-Percent Movement of the American people against the centers of wealth and power in America and the widespread protests of the people in Western Europe against the economic policies of their governments show that the people are losing their patience with this situation."

As reported by the Guardian, "To watch Iranian state television, you'd think the country was hosting the Olympics." There has been much airtime on the Summit, glorified by the Iranian press as a part of the effort "to claim a diplomatic triumph in defiance of western-led efforts to isolate Tehran over its controversial nuclear dossier." UN Secretary General Ban Ki-moon was one of the prominent attendees, as well as Egyptian President Mohamed Morsi, Manmohan Singh, the prime minister of India, Afghanistan's President Hamid Karzai and Qatar's Emir Hamad bin Khalifa Al Thani, as well as high-ranking officials from the Persian Gulf countries.

The article continues to explain that while simultaneously censoring those who criticized Iran's nuclear program or support of the Syrian government on Iranian Television, "they were able to depict an Iran that was a key-player in international politics but the unfortunate victim of a western-led campaign against its peaceful nuclear programme." Although Iran has been singing the same tune for years about how its nuclear program is peaceful, Patrick Burke of CNS News reports that in 2003, their nuclear activities were first discovered as a breach of their obligations under the Nuclear Non-Proliferation Treaty.

Ayatollah Ali Khamenei praised the Occupy Movement, saying that "Everybody has become tired of this faulty international structure," while denouncing the West as having access to nuclear weapons. He said, "The U.S. and its Western allies have armed the usurper Zionist regime with nuclear weapons and created a major threat for this sensitive region." He also reassured everyone that Iran's nuclear activities are peaceful.

No self-respecting Iranian speech from these leaders can be complete without strongly denouncing the evil Zionists, as the Supreme Leader also states regarding Palestine,

"This great usurpation – which at the outset was accompanied with massacres of defenseless people in towns and villages and their expulsion from their homes and homeland to bordering countries – has continued for more than six decades with similar crimes and continues to this very day."

So, the bottom line is that Iran is censoring comments regarding Iranian support of Syria and the continuation of their nuclear program to Iranian citizens (who don't need those pesky details); they hate Israel and the US, but just love the warm fuzzy Occupy Protesters; they want to keep their nuclear activities (for "energy" purposes only, of course); and they want the United States and Israel to get rid of their weapons. Sounds great.

It will be interesting to watch the American political scene to see who else will embrace the Occupy Movement and why.