Is Iran a Threat or Not? They Say They Are and We Should Take Them Seriously 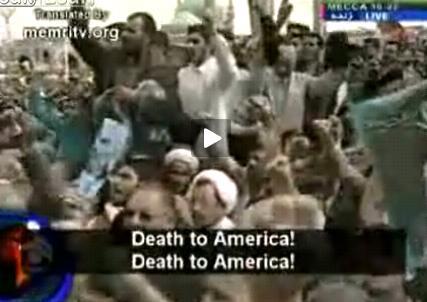 There have been some confusing things coming from Washington in light of the nuclear talks with Iran. For one thing, some in the Intelligence Community quietly removed Iran from the list of terror threats according to the Times of Israel on March 16:

An annual report delivered recently to the US Senate by James Clapper, the director of National Intelligence, removed Iran and Hezbollah from its list of terrorism threats, after years in which they featured in similar reports.

The unclassified version of the Worldwide Threat Assessment of the US Intelligence Communities, dated February 26, 2015 (PDF), noted Iran's efforts to combat Sunni extremists, including those of the ultra-radical Islamic State group, who were perceived to constitute the preeminent terrorist threat to American interests worldwide…

According to one Israeli think tank, the removal of Iran and its proxy Hezbollah from the list of terror threats, where they featured in previous years, was directly linked to the campaign against the Islamic State.

"We believe that this results from a combination of diplomatic interests (the United States' talks with Iran about a nuclear deal) with the idea that Iran could assist in the battle against the Islamic State in Syria and Iraq and maybe even in the battle against jihadist terrorism in other countries," the Meir Amit Intelligence and Terrorism Information Center said in an analysis of the report. It also noted that Iran and Hezbollah were both listed as terrorism threats in the assessment of another American body, the Defense Intelligence Agency.

Of course, this possibly softened stance occurs as the Administration has been negotiating with Iran over nuclear development, as Israeli Prime Minister Netanyahu took the case against Iran directly to the U.S. Congress over the objections of the Executive branch, as Iran is being courted to aid in the battle with ISIS, and as the White House rebuked 47 Senators for writing an open letter to Iran. So, it gets pretty complicated. Should we view Iran as friend or foe?

One answer to that question comes from former CIA Director General David Petraeus. From Politico:

David Petraeus: Iran more of a threat than ISIL

Former CIA Director Gen. David Petraeus says the Islamic State of Iraq and the Levant is not the biggest threat facing the United States in Iraq. "In fact, I would argue that the foremost threat to Iraq's long-term stability and the broader regional equilibrium is not the Islamic State; rather, it is Shiite militias, many backed by — and some guided by — Iran," Petraeus said in written comments to The Washington Post's Beirut bureau chief, Liz Sly.

Another answer comes from Saudi Arabia.

Perhaps the best answer, however, came today from Iran's Supreme Leader. According to Times of Israel:

Iran's Supreme leader Ali Khamenei called for "Death to America" on Saturday, a day after President Barack Obama appealed to Iran to seize a "historic opportunity" for a nuclear deal and a better future, and as US Secretary of State John Kerry claimed substantial progress toward an accord.

Khamenei told a crowd in Tehran that Iran would not capitulate to Western demands. When the crowd started shouting, "Death to America," the ayatollah responded: "Of course yes, death to America."

Should we take this threat seriously? ABSOLUTELY.

Despite any seeming downgrade by the Administration, a recent report explained precisely why we should be more concerned than ever that Iran is developing nuclear weaponry. According to recently translated military documents, the Iranian state has endorsed an EMP strike against America. Such a strike, if effective, would prove existential according to most experts. That means that an effective EMP attack could end the United States as we know it today.

As reported in the Washington Examiner:

Suspected for years of plotting to dismantle the U.S. electric grid, American officials have confirmed that Iranian military brass have endorsed a nuclear electromagnetic pulse explosion that would attack the country's power system.

Suspected for years of plotting to dismantle the U.S. electric grid, American officials have confirmed that Iranian military brass have endorsed a nuclear electromagnetic pulse explosion that would attack the country's power system.

The issue of a nuclear EMP attack was raised in the final hours of this week's elections in Israel when U.S. authority Peter Vincent Pry penned a column for Arutz Sheva warning of Iran's threat to free nations.

"Iranian military documents describe such a scenario — including a recently translated Iranian military textbook that endorses nuclear EMP attack against the United States," he wrote.

A knowledgable source said that the textbook discusses an EMP attack on America in 20 different places.

Arizona Republican Rep. Trent Franks, who is leading an effort to protect the U.S. electric grid from an EMP attack, has recently made similar claims based on the document translated by military authorities.

Once sneered at by critics, recent moves by Iran and North Korea have given credibility to the potential EMP threat from an atmospheric nuclear explosion over the U.S. [To Continue Reading at Washington Examiner…]

So, while some in the Intelligence Community have tried to downplay the threat from Iran, others see Iran as THE threat. This includes former Director Petraeus, the Israeli Prime Minister (and presumably the Israeli people who recently reelected him), with support from recent statements by the Supreme Leader of Iran himself. The Iranian people in recent demonstrations shared their animosity toward America and President Obama as well. And, based on translated Iranian military documents, it is confirmed that Iran has a military plan to end America once they obtain the capability.

So what can you do? Read the book Game Plan; How to Protect Yourself from the Coming Cyber-Economic Attack for a good primer on what the risk is and basic preparations. Encourage your Congressional representatives to take these threats seriously. Finally, pray for our nation. If we can't even admit a threat this obvious, we need help.