Is the American Bond Selloff Underway? 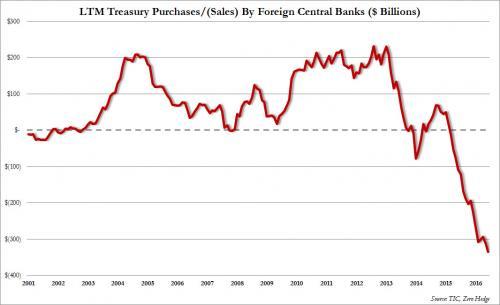 They told us not to worry. The United States would never lose its Triple-A bond rating (but of course we did). The dollar would always be the only real reserve currency (but of course it could be losing that status according to our Secretary of State). The Chinese Yuan wouldn't be considered as a reserve currency (but of course it will be this October). And that no one would ever dump our bonds because there was nowhere else to go (even though that is happening now with the sale of $335 billion worth of our Treasury debt by foreign central banks over the last year and $192 billion over the first six months of this year):

In the first six months of this year, foreign central banks sold a net $192 billion of U.S. Treasury bonds, more than double the pace in the same period last year, when they sold $83 billion.

China, Japan, France, Brazil and Colombia led the pack of countries dumping U.S. debt.
It's the largest selloff of U.S. debt since at least 1978, according to Treasury Department data.

"Net selling of U.S. notes and bonds year to date thru June is historic," says Peter Boockvar, chief market analyst at the Lindsey Group, an investing firm in Virginia.

[To CONTINUE READING at CNN….]

Despite repeated warnings and threats from the rest of the world, we have continued to assume that our currency would always be on top. We have assumed that we could double our outstanding debt in eight years without consequence, surpassing $20 trillion. We believed that even if the dollar had some problems, it was the cleanest shirt in the dirty laundry and therefore the one the world would wear. Any other single alternative would be worse. While there is no doubt truth in that metaphor, what it is missing is that the dollar doesn't have a single alternative. Sure, it is perhaps better than any single currency but is it better than many alternatives? Foreign nations are now diversifying more than ever before.

We once boasted that China would never directly challenge our economy because we owed them too much money. They had too much to lose. That thinking was myopic. China is playing a long-term game and not all the players share the mindset that the goal is a western definition of prosperity. And that is perhaps the greatest weakness of our elite in this nation. Arrogance. Why would we assume that the Communist Chinese would be more bought in to Western Capitalism when we know that not even the youth in America are believers? Now, President Xi is pushing China back to Marxism.

It is time we faced the reality that our economic system and way of life are under attack. We thought that the fall of the Berlin Wall won a permanent victory for "truth, justice, and the American Way." Yet, socialism and communism have reasserted themselves. And the old communist goals developed by the KGB in the 1950s are being realized today. And there is a systematic effort underway to replace the American-led financial order with one outside our dominance. Initially, this was a Russia/China-led effort. Other nations, much to our dismay, have joined, including critical allies.

Even in Europe we find our efforts undermined as Turkey, Russia, and Iran have banded together to solve the Syria problem and America is on the outside looking in. That is particularly extraordinary as the divide between Turkey and Russia/Iran was once viewed as unsolvable. Now, Putin may be inside NATO. The bottom line is that we have lost stature politically. But at least we have an economy that the world envies. We think.

The intelligentsia running this nation have found solace in the fact that even if our economy struggles, at least it is better than the rest of the world. The fact that our dollar has held up despite our enormous debt is viewed as a sign that the world trusts us to remain the economic leader. What they are missing, however, is that American stature has diminished across the board. And, the one area that they could point to is no longer showing strength. Nations around the world are fleeing our Treasury bonds despite the fact that most of the rest of the world has embraced negative interest rates. The theory that our higher yields would draw excess capital does not seem to be working as well as expected.

Here is the reality. Our "superior" growth (if you can ever call a 1.2% annualized increase in GDP to be growth at all), has been based on demographics rather than productivity or ingenuity. This is important. Recent data suggest that we have grown largely because our population has increased, not because our economic approach has been so much better. This is despite an elitist effort to shrink our population. And the population growth does not seem to be from high achievers coming here. George Soros has been pushing to bring in hundreds of thousands of refugees. Obviously we want to be as compassionate was possible. But wouldn't it make more sense to help address the problems creating so many refugees rather than to bring them here and put them on welfare? George Soros has his own agenda and has used his money and significant influence to force refugees on Western nations in a plan to increase his global influence.

We are told that America is so great and that's why people are fighting to get here. Then why do we see more Americans giving up their citizenship than ever before? Ironically, it is the wealthy and successful seeking to leave.

Of course, there are a number of successful people coming to America as well, largely on the back of the EB-5 program. A close look at this program, however, has brought some frightening revelations. There is evidence to suggest that EB-5 is being manipulated by the Chinese (and perhaps others) to infiltrate our nation. The Chinese government appears to be sponsoring and even funding some of their best and brightest citizens to come here. Why? This would seem to be against their interests. Yet, as the Chinese and others sell their holdings of American debt, they have been funding the acquisition of American property under Chinese control according to work from Shae Armstrong.

Anti-Americanism is on the rise as evidenced by the Olympics. Our stature is diminished when the President boldly proclaims that we don't pay ransom and then hands $400 million to Iran so they will release our hostages. Foreign nations appear ready and willing to hack our political parties and our government. And now, the dumping of our bonds may be the ultimate signal. We were assured that it would never happen. But it is.