ISIS Plotting "Second Blow" to Financial System; Goal is to Destroy the Dollar 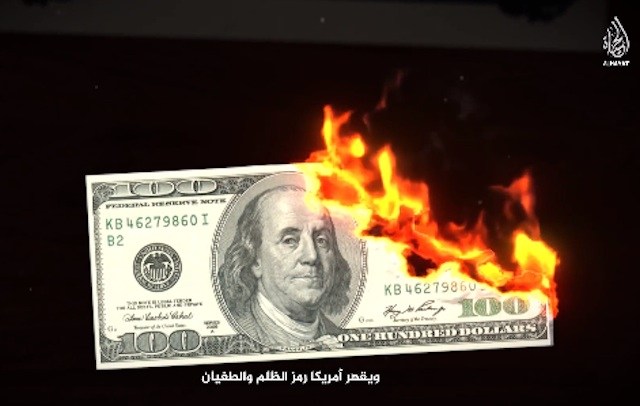 We have long contended that the purpose of the 9/11 attacks was first an economic attack. The goal was then, and remains to destroy America by collapsing our financial system. Now, ISIS proves our point with their most recent video threat (see screen capture of burning dollar). This matches their recent ISIS Timeline for global domination. And top intelligence officials have admitted that such a threat is genuine. Don't forget that the 9/11 Commission has warned of a cyber-economic Pearl Harbor.

ISIS declares war on the US dollar with the "gold dinar"

The Islamic State on Sunday, Aug. 30, launched a new campaign to destabilize the US Dollar with a 54-minute video tape, produced to the professional standards of New York Madison Avenue. for general distribution. This is the first known instance of a terrorist organization declaring financial war on America. Graphic diagrams and figures are displayed to demonstrate that the mighty dollar is nothing but a piece of paper, whose value declines year by year when this is realized."The Jews" are inevitably presented as the prime movers behind the dollar's false status as the world's strongest currency . . . .

All the same, DEBKAfile's counterterrorism experts disclose that the jihadis are deadly serious about their plan to wage a war of terror on the Western economy and financial system…

The ISIS video was not released merely as a provocative propaganda thrust against the likes of Wall Street and Western financiers. The jihadis seriously believe that financial terrorism can be a destructive weapon for destabilizing the US-dominated global economy at least as devastating as a raging horde of suicide bombers.

To CONTINUE Reading at DEBKAfile:  http://www.debka.com/article/24851/ISIS-declares-war-on-the-US-dollar-with-the-"gold-dinar"

This story was also carried on The Blaze and even hit DrudgeReport today. Here are a few thoughts from The Blaze:

The Islamic State group revealed over the weekend that at the centerpiece of its goal to bring down America is a concerted effort to weaken the U.S. dollar and replace it with gold currency.

A video posted Saturday warned of the "dawning of a new age" in which replacing the dollar with gold would deliver "the second blow to America's capitalist financial system of enslavement … casting into ruins their fraudulent dollar note."

The first blow, it said, was the September 11 attack on the World Trade Center….

To CONTINUE Reading at The Blaze: http://www.theblaze.com/stories/2015/08/30/islamic-state-plotting-second-blow-to-u-s-financial-system-in-bid-to-purify-the-earth-of-corruption/

Now, let's analyze the motive for putting this dramatic message out at this particular time. A cynic might declare this a bluff for publicity, but top intelligence analysts disagree. The threat is fully intended.

Another possibility is that ISIS is aware of other threats to the dollar that are emerging and wants to position for credit if something happens. There's little doubt, based on a review of the video's contents, that ISIS believes the dollar to be vulnerable. And they are no doubt aware of Russian and Chinese calls for an end to the use of the dollar. They may even be aware of specific plots about to be executed. At a minimum, they know that the IMF has discussed including the Chinese Yuan in their SDR offerings. At one point, many believed that was to happen this month (even though it was delayed until next year). They are also likely aware that the petrodollar system seems to be unraveling and may be aware of oil producers planning to speed up that effort. Like al Qaeda did before 9/11, ISIS does have some substantive support among oil billionaires according to intelligence sources.

A third, and perhaps even more frightening possibility is that ISIS does have specific plans to attack our financial system. We know, for example, that ISIS has a sophisticated hacker element. In fact, they deemed one of their hackers "Secret Weapon." He was concerning enough that U.S. forces targeted and killed him with a drone last week. [Interesting name, Secret Weapon, as it matches the name of my NY Times Bestseller that details the financial warfare threat.]

We already know that a sophisticated financial attack by cyber or other means does have the potential capability to take down our financial system according to former NSA Director Keith Alexander.

We know that the dollar is at risk as well, much more than the Administration cares top admit. We have put it at risk with poor fiscal policies as noted by the bi-partisan GAO (Government Accountability Office). Take a look at this Bill O'Reilly report last year.

We cannot be so arrogant as to ignore this threat. Our enemies are deadly serious and searching out vulnerabilities to exploit. This is a Global Economic War and ISIS just declared that they are "all in."