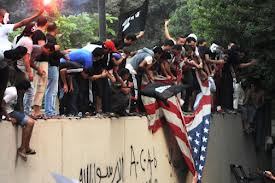 Last October we explained how the Benghazi incident  highlighted the very sad politicization of the Intelligence reporting of the United States. Not at the functional level, but at various points in the political leadership. Click the link below and read the post in light of this week's revelations:

It Doesn't Fit the Narrative

To be fair, there were cases of politicization of defense and intelligence matters in the Bush years as well, with the media questioning whether or not there really were WMDs in Iraq and the whole Valerie Plame situation to name a couple of incidents.

In our case, we have first-hand evidence of a problem in this regard. We were repeatedly told that "no one wants to go there"  and that "it doesn't fit the narrative" when we presented credible evidence of financial market manipulation that took place in 2008 and threats of worse going forward. In private meetings with Intelligence Officials, some privately acknowledged that "the narrative" prevented a thorough review of what took place in the financial crash. They said it was "in the past" and no one wanted to look back. Of course, this is from the same Administration that said last September's Benghazi tragedy was "a long time ago."

The fact is that I was recruited by the Department of Defense to produce a report that clearly demonstrated American vulnerability to economic warfare. I then spent months attempting to draw serious attention to this shocking reality. There was an internal political effort to marginalize the issue and even threats to classify the work to prevent Americans from seeing it. We have the emails that prove this. When the report finally surfaced, there was a vitriolic discredit effort launched at Media Matters and other locations. But that is politics and it is easy to understand why Media Matters, funded in part by George Soros might have their opinion. Even Harvard Law professor Alan Dershowitz, no right-winger, understands the political agenda behind Media Matters. But the most troubling aspect is that the Administration purposely avoided looking into the economic warfare threat. This isn't just our view, it was what was clearly shared with Bill Gertz by Pentagon Insiders in 2011:

"Regardless of the report's findings, U.S. officials and outside analysts said the Pentagon, the Treasury Department and U.S. intelligence agencies are not aggressively studying the threats to the United States posed by economic warfare and financial terrorism.

‘Nobody wants to go there,' one official said."

Now, it is essential to note that Bill Gertz is considered the preeminent Defense reporter in America and his sources are believed unimpeachable. That opinion was shared in an article by Jamie McIntyre, a former CNN reporter who covered the Pentagon for more than a decade and now anchors at NPR‘s  All Things Considered, just before Gertz wrote the article on Financial terrorism. From Freepressers.com:

Rumsfeld on the press: Bill Gertz was the ‘best reporter, excellent sources'

By Jamie McIntyre, formerly of CNN

Shortly after his arrival at the Pentagon, Defense Secretary Donald Rumsfeld apparently rendered a quick judgment on the reporters covering the Pentagon, and pronounced Bill Gertz of the Washington Times, the "best reporter".  "Excellent sources," he noted.

The judgments can be found in one of his famously terse "snowflakes" posted along with the hundreds of recently declassified documents Rumsfeld has posted to back up his arguments in his new memoir Known and Unknown . . .

And Bill Gertz does, in fact, have the deepest and most amazing sources, especially on the very difficult intelligence beat.   Never wrong.   And that's saying something.

Gertz has also been reporting on the Benghazi Failures: http://freebeacon.com/benghazi-failure/. This time, though, he is not alone. ABC News has a very dramatic story that documents how distinctly intelligence was doctored for political means:

When it became clear last fall that the CIA's now discredited Benghazi talking points were flawed, the White House said repeatedly the documents were put together almost entirely by the intelligence community, but White House documents reviewed by Congress suggest a different story.

ABC News has obtained 12 different versions of the talking points that show they were extensively edited as they evolved from the drafts first written entirely by the CIA to the final version distributed to Congress and to U.S. Ambassador to the U.N. Susan Rice before she appeared on five talk shows the Sunday after that attack.

White House emails reviewed by ABC News suggest the edits were made with extensive input from the State Department.  The edits included requests from the State Department that references to the Al Qaeda-affiliated group Ansar al-Sharia be deleted as well references to CIA warnings about terrorist threats in Benghazi in the months preceding the attack.

That would appear to directly contradict what White House Press Secretary Jay Carney said about the talking points in November.

"Those talking points originated from the intelligence community.  They reflect the IC's best assessments of what they thought had happened," Carney told reporters at the White House press briefing on November 28, 2012.  "The White House and the State Department have made clear that the single adjustment that was made to those talking points by either of those two institutions were changing the word ‘consulate' to ‘diplomatic facility' because ‘consulate' was inaccurate."

Other news sources also have reports on how the intelligence function has been politicized:

The Inconvenient Truth About Benghazi

Lara Logan of 60 Minutes made it very clear that she believed the Administration was "lying to us" for political reasons in a speech in Chicago last year:

During a recent keynote address at the Better Government Association annual  luncheon last Tuesday, Logan delivered what the Chicago Sun Times called "a provocative speech" to some  1,100 movers in government, politics, media, and the legal and corporate arenas.  She explained that the Taliban, al Qaeda and its proxies haven't gone away and  are in fact re-energized and coming back in force. Logan also informed the crowd  that a "lie" is being propagated by the American government.

"I chose this subject because, one, I can't stand, that there is a major lie  being propagated…" Logan announced. The lie is that the U.S. military has  tamed the Taliban.

"There is this narrative coming out of Washington for the last two years," Logan began. It is driven in part by "Taliban apologists," who claim "they are  just the poor moderate, gentler, kinder Taliban."

Now, add to these revelations the IRS admission that it targeted Tea Parties and Patriot Groups and you get sick sense that somehow the whole system has been politicized. The IRS has since backtracked from the original apology to something more politically acceptable, but the credibility damage has already taken place:

WASHINGTON (AP) — The Internal Revenue Service apologized Friday for what it acknowledged was "inappropriate" targeting of conservative political groups during the 2012 election to see if they were violating their tax-exempt status. IRS agents singled out dozens of organizations for additional reviews because they included the words "tea party" or "patriot" in their exemption applications, said Lois Lerner, who heads the IRS division that oversees tax-exempt groups. In some cases, groups were asked for lists of donors, which violates IRS policy in most cases, she said . . .

When you put it all together, our experience of the past five years seems very much in line with this politicization evidence. Yet, this is not a Partisan Issue.

The point is this:  We have been fed a narrative for political reasons that distorts the truth.We were told directly "off the record" by very senior officials that this is why the United States Government has failed to address the economic warfare threat we identified. We were told, "no one wants to go there" and that the Intelligence Community is restrained by the politics.  In fact, the government failed to even conduct a proper follow-up study even though other Pentagon reports have specifically included economic warfare attacks as potential WMDs capable of destroying our nation (as reported by Bill Gertz). That is why we wrote the book, Secret Weapon, to make the truth available to the American people before it is too late to respond. It no longer matters if it "fits the narrative." We deserve the truth.