It has always been about Economic Warfare

In the early 1960s, several quotes circulated that were attributed to Soviet Leader Nikita Khrushchev. These quotes have begun to circulate again and we've shared one of those below. Historians argue as to whether or not the Soviet leader actually said the quotes or not (most believe he did not). President Reagan did attribute such a quote to him as did the Secretary of Agriculture, Ezra Taft Benson who claimed to hear it directly. Those on the left claim that the quotes are really just fear mongering and that Khrushchev never said them.

For a moment, remember the early 1960s. Don't ask if Khrushchev said this or not. Ask whether he believed it or not. A strong argument can be made that he did believe it and so far it appears to have been proven true. We know that the plan was to use Economic Weapons to weaken us. That was clearly evidenced in testimony of top Soviet defectors. 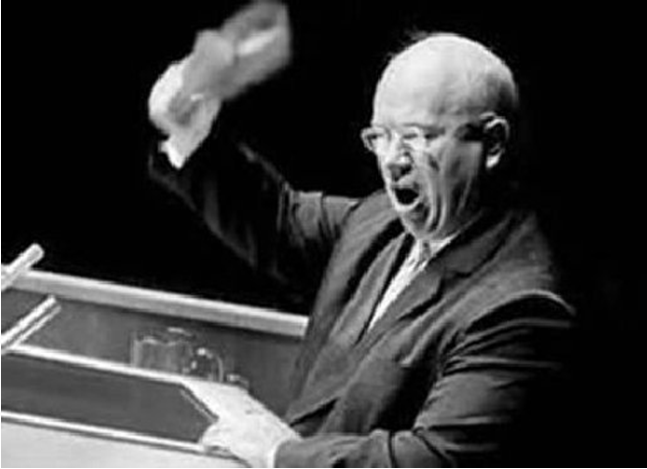 "Your children's children will live under communism. You Americans are so gullible.  No, you won't accept Communism outright; but we'll keep feeding you small doses of Socialism until you will finally wake up and find that you already have Communism.  We won't have to fight you; WE'LL SO WEAKEN YOUR ECONOMY, until you fall like overripe fruit into our hands."

Now, keeping that quote in mind, take a look at these posts:

Is the Cold War Really Finished?

Selling China the Rope to Hang Us

Of course, the Soviet Union collapsed. As we demonstrated in Secret Weapon, that collapse was at least in part the result of the West's use of economic weapons to win the Cold War. Then, however, it seems that we assumed we had won and stopped attempts to protect against economic attack. Even the idea of an economic weapon used against America is deemed preposterous.

BOTTOM LINE:  It has always been an economic war. Twenty years ago we thought we had won and could rest in our victory. The truth is that the fight continues and we must get in it or "the fear mongers" of the 1960s will be proven right.