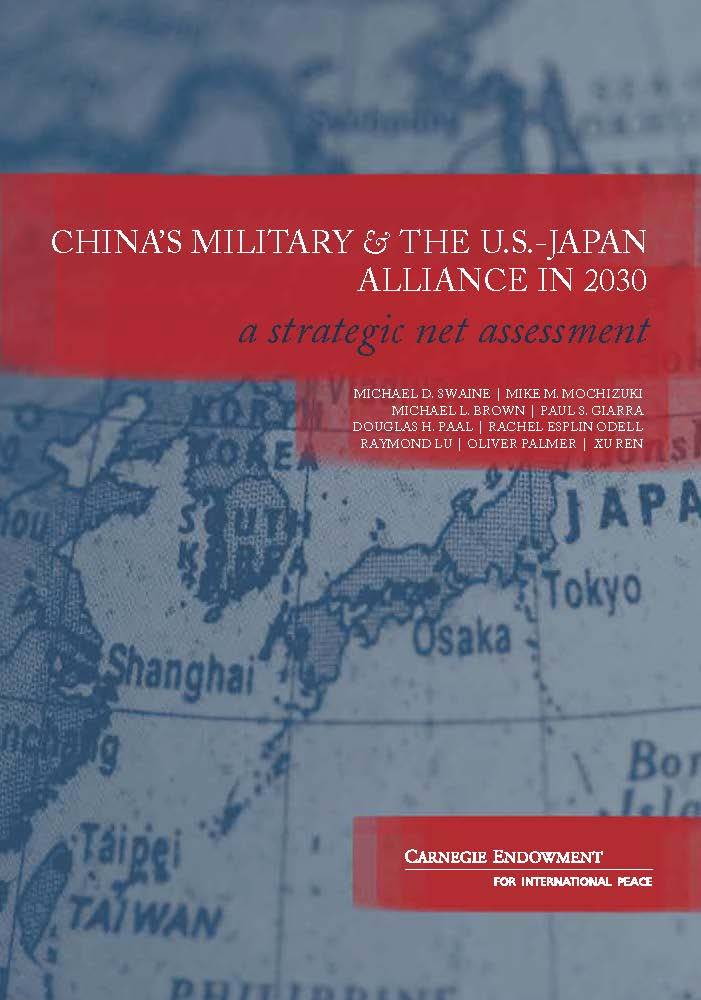 A new report by the Carnegie Endowment for International Peace, a Washington, D.C.-based think tank, demonstrates exactly why the global conflict for power really is, at its heart, an economic war. [Or, as Bill Clinton might say,  "It's the Economy, Stupid."]

China's Military and the U.S.-Japan Alliance in 2030: A Strategic Net Assessment,

outlines a likely competition between China and the United States over the next 15-20 years.

The report was released 3 May and has already received substantive praise. Here are a few examples:

"The Asia century is well under way, and with it the emerging challenges of a region in transition…. Any sound future policy will require a thorough assessment of China's evolving military and foreign security capabilities and of the capacity and willingness of Tokyo and Washington to sustain their historic cooperation. There are no guarantees that the future will resemble the recent past, and the best approaches for continued deterrence credibility and regional stability will require careful consideration and thoughtful analysis.

To this end, the Carnegie Endowment has offered up an extraordinary contribution: China's Military and the U.S.-Japan Alliance in 2030: A Strategic Net Assessment. The future security and prosperity of the Asia-Pacific region may very well be defined by the content of this assessment. But one thing is certain: the United States and Japan must recognize that in the future, status quo thinking is unlikely to guarantee a stable security environment that serves the long-term interests of the bilateral relationship or the region."

"Michael Swaine and his co-authors have done an admirable job of thinking through the complex interactions of the U.S.-Japan-China relationship in the future. Using scenarios and trend projections, they go beyond simple predictions to examine the complex interactions of different developments and reactions among the three countries and different groups within them. While I do not agree with specific military and policy judgments in all the scenarios, I strongly endorse the effort to examine potential developments along with likely and possible reactions and counterreactions. The triangular interactive relations among these great Asian powers will determine both the overall future of the region and much of the futures of each of the individual countries."

"The U.S.-Japan alliance has long been crucial to the military balance in the Western Pacific. The balance of power in the region is now shifting toward China, and tensions between Asian states are rising concomitantly. Current trends suggest that the United States and Japan will not find it easy to sustain immunity from coercion as they seek to preserve stability, secure their national interests, and manage crises in the region over the coming years. This study is a remarkably timely, thoughtful, and meticulous examination of the drivers and choices the allies will face through 2030. It illuminates probable shifts in the strategic landscape of northeast Asia, their consequences, and the policy and resource allocation choices they pose. In this strategic net assessment, the scholars Carnegie assembled have given decision makers in Tokyo and Washington a uniquely insightful and thought-provoking policy-planning tool."

"There is nothing out there like this—a very important piece of work…. This is an elegantly framed study that systematically assesses the postures of China, Japan, and the United States and treats the dynamics between them. Obviously, this is tough to execute, but the authors have done an outstanding job. The report addresses a critical subject and offers empirically based suggestions…. There is nothing like it in terms of looking at the interactions between states to produce a set of possible future regional dynamics."

Now, what does the report conclude?

Basically, the report outlines three possible scenarios that will determine the relative role of the United States and China with Japan responding to the changes of both. From WIRED Magazine:

"Over the next 15-20 years, the U.S. and China are headed for a confrontation in the western Pacific, with Japan caught in the middle. And China, currently the underdog, could very well come out on top. That's the unnerving conclusion of a new report by the Carnegie Endowment for International Peace, a Washington, D.C.-based think tank."

The nightmare scenario for U.S. interests is listed first:

The hopeful (at least for America) is listed next:

"The opposite extreme is an era of substantially increased U.S. presence in the western Pacific . . . But this rosy scenario counts on a big boost in U.S. military spending, amounting to a full four percent of GDP — an assumption that itself hinges on a rapid economic recovery from today's depressed levels plus a sustained high birth rate. In addition to more spending, the "America-wins" future assumes ideal outcomes across a wide range of military initiatives. The F-35 fighter and the new stealth bomber come in on time and on budget — and they both work as advertised. A U.S. plan to expand its naval fleet also proceeds without a hitch."

The final scenario is described as realistically the best America could hope for:

"So which scenario is probable? America does not collapse back into economic crisis but neither does yearly growth reach the three-percent threshold policymakers desperately hope for. China also enjoys moderate economic expansion sustaining continued improvement of its air, sea, land, space and cyber forces . . . This version of the western Pacific circa 2030 is also probably the best that anyone in Washington should hope for, given economic, cultural and strategic realities."

You can find the entire report as well as an Executive Summary here:
http://carnegieendowment.org/2013/05/03/china-s-military-and-u.s.-japan

Now, let the three scenarios sink in a bit.

The only real difference between U.S. Success and Failure is almost exclusively dependent on American economic strength. Is there any wonder as to why the People's Liberation Army in China has identified Economic Warfare as the most important form of warfare in the 21st Century? This is the clear conclusion of Unrestricted Warfare (published by the PLA in 1999 and later supported in an official journal of the Communist Party in December 2010).

It is essential to understand that the very same military strategy and doctrine that undergirds cyber hacking is rooted explicitly in the Unrestricted Warfare approach. It would be foolish to accept that the Chinese PLA is hacking our computer systems without also acknowledging their efforts to undermine our financial markets or target our currency.

"As we see it, a single man-made stock market crash, a single computer virus invasion, or a single rumor or scandal that results in a fluctuation in the enemy country's exchange rates…can all be included in the ranks of new-concept weapons."

"Financial Warfare will undoubtedly be an entry in 21st Century military jargon. The main protagonist in this section of the history book will not be a statesman or military strategist; rather it will be George Soros."

We have been preaching this in Washington for nearly five years. Unfortunately, despite this stark reality, most inside our defense and intelligence establishment remain wholly ignorant of the extraordinary threat of Economic Warfare. Sadly, those who understand the markets and economy can't even begin to imagine that we are in an economic war. They naively tend to believe that all global economic players are solely focused on monetary gain and have some kind of transnational interests. Our efforts have been to cross-pollinate the disciplines before it is too late.

Fortunately, there are a few who have read and understood the Unrestricted Warfare playbook. One is retired Lt. Colonel Timothy Thomas in the U.S. Army's Military Studies Office. He asked the critical question in a Wall Street Journal interview, Why Did We Wait So Long to acknowledge the threat?

We can only hope that the Carnegie Institute report conclusions will be as obvious to policymakers as they are to us. The future of American defense hinges directly on whether or not we can survive the global economic war already underway.