Two of the big stories on Friday support what we have been saying for years. The first was the revelation that JP Morgan Chase would lose at least $2 billion from Credit Default Swaps. We have long argued that rather than being safe instruments that can reduce risks, these are financial weapons of mass destruction that can enhance risks. The fact that the bank long considered "best in class" on the Street could make a $2 billion blunder with these instruments shows how dangerous they can be. And, that is a bank with a profit motive. Imagine the damage that could be wrought if these were used intentionally to wreak havoc. Oh, that's right. George Soros already told us that Credit Default Swaps were used in bear raids against Lehman Brothers in 2008 and that these bear raids nearly destroyed the financial system.

We believe that one reason the government has failed to properly investigate the financial terrorism of 2008 is that Wall Street fears it will uncover their misdeeds. It is pretty amazing that despite causing a near global depression, the 2008-09 collapse has gone without anyone being thrown in jail. The one exception is Bernie Madoff and he turned himself in. Our team delivered a credible report that specifies very suspect behavior and activity pointing to financial terrorism. Yet, there was no follow-up study as promised. Now, officials are saying that we should look forward but not go through the treasure trove of evidence from 2008. Why? We suspect that there are some people who would be very embarrassed by what happened four years ago the same way that JP Morgan Chase is embarrassed today. To JP Morgan's credit, they are at least admitting their mistake and hopefully correcting their "sloppiness." There was more than sloppiness at work in 2008. Here are some articles that address Wall Street problems: 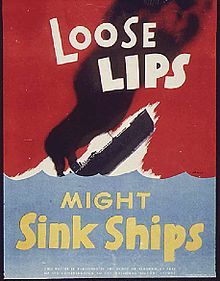 The second major story was the advertising campaign by the Federal Bureau of Investigation warning that economic espionage was happening and how we need to guard against it. The last time the government was so direct in such warnings was during World War II when Americans were told that "loose lips sink ships." Why the warnings now? Because the Chinese among others have been robbing America blind. This is all a part of global economic warfare. It has also been Chinese military doctrine at least since the publication of Unrestricted Warfare. We've discussed it before in this Blog, in fact:

Now, if you put the two stories together, it is easy to recognize that an economic enemy could use financial instruments to achieve objectives. For example, what if it were in the interests of China to see the failure of a particular manufacturer? Would they be willing to use Credit Default Swaps to hurt the credit of their target? Of course they would!

We may see greater regulation of Credit Default Swaps going forward. Let's just hope that this regulation is properly focused and addresses the very real risks that these instruments can be used as economic weapons. In terms of the FBI, lets hope that this is the start of a greater effort to protect our economy from foreign attacks.

Here are links to the FBI story: