Kevin Freeman warns of a Pearl Harbor-like attack on The Daily Caller (April 15, 2012) 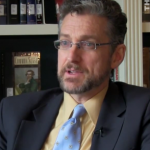 Economic Investment adviser Kevin Freeman has a frightening message, he says, and we're running out time to listen. Freeman, the author of Secret Weapon: How Economic Terrorism Brought Down the US Stock Market and How it Can Happen Again, warned The Daily Caller that America could find itself on the receiving end of a Pearl Harbor-like attack from financial terrorists who wage economic warfare instead of carrying out suicide bombings

The Pearl Harbor analogy, Freeman said, is a conscious one. He compared himself to Army General Billy Mitchell, who gave the U.S. Navy similarly unconventional warnings nearly a century ago

"Starting in the 1920s," Freeman told TheDC's Ginni Thomas, Mitchell "began to warn the defense establishment that Pearl Harbor was subject to a possible attack. And he actually pinpointed the Pearl Harbor attack by the Japanese."