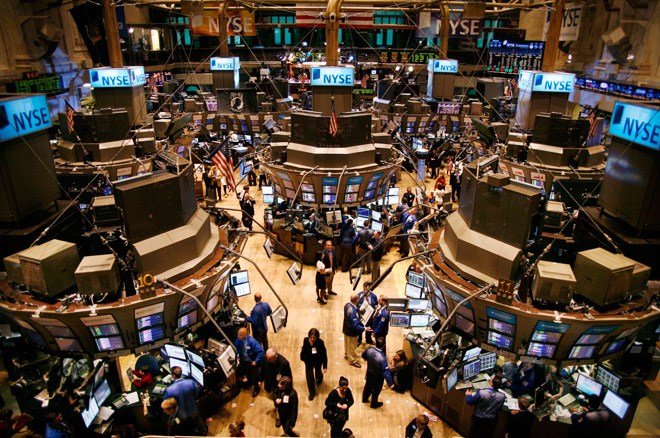 While a culture war has been raging at the local Chick-Fil-A, an economic war has been raging on Wall Street. According to today's issue of The Wall Street Journal, "Knight Capital Group Inc., scrambled Thursday to shore itself up and reassure panicked customers after disclosing a stunning $440 million loss from a computer-trading glitch." So, what happened? Essentially the firm installed new software that created rapid-fire trades in approximately 150 stocks Wednesday morning. This is "high frequency trading" (HFT) wherein buys and sells are placed in speeds measured in milliseconds (millionths of a second).

Knight's extraordinary loss, combined with the failure of the BATS system (wherein Apple lost 10% of its market cap in a blink of an eye), plus the misery of the Facebook IPO, and the "Flash Crash" of May 6, 2010 (where the Dow lost almost 1,000 points in a few minutes time), has sparked a serious debate. Is high-frequency trading beneficial or detrimental. There are loud voices on both sides.

For the most part, proponents of HFT make four basic arguments. First, they state that the technological adoption is inevitable. It can't and won't be stopped and we should just accept it. They consider opponents to be anti-technology. They go on to argue that human trading creates errors also. It is not the fault of the computer programs or algorithms. They next argue that HFT has improved efficiency and thus liquidity. HFT buyers are available to buy when human traders might not be. Finally, proponents argue that HFT has sharply lowered the cost of trading.

Opponents are just as vocal. One of these is Marc Cuban who made his personal fortune through technology but sees serious problems with HFT. Here are some excerpts from a June interview with him in The Wall Street Journal:

WSJ:When did you start becoming concerned that rapid-fire trading was a problem?

Mark Cuban: When the flash crash hit, that got me looking at algorithmic trading and the state of the market. I came to realize that the stock market no longer knew what business it was in. I wrote a blog that basically said that the markets for equities of all kinds had evolved to a platform for hackers.

That got me looking further into issue of high-frequency traders. They are the ultimate hackers. They're running software programs that have one goal, and that's to exploit the trading systems as early and often as possible. As someone who wrote software for eight years and who keeps up very closely with the technology world, that scared the hell out of me. The only certainty in the software world is that there is no such thing as bug-free software. When software programs are trying to outsmart other software programs and hack the world's trading platforms, that is a recipe for disaster.

Opponents can point to several types of technology including weaponry that societies have chosen not to pursue for safety reasons. So, they argue that HFT should not be assumed inevitable and that society should exercise wise restraints. As for the risk of human errors, HFT opponents point out that it is easier to avert big mistakes at slower speeds. Sometimes cooler heads can prevail. As for improved liquidity, opponents point to how the HFT traders have driven the average investor from the market. Thus, models may show enhanced liquidity in the market but there has been so great a loss of investor participation that it is meaningless. No one is left to benefit in other words. In regard to cheaper executions for stock trades, opponents of HFT point out that the primary purpose of financial markets has been lost. There has been very little capital formation and long-term returns for real investors have been quite poor during the period of HFT. Stock prices churn but no one other than HFT traders makes a profit.

The most significant objection, however, has so far been ignored by the major media. High Frequency Trading can be a Secret Weapon exploited in hidden ways to destroy our capital markets and way of life. Quoting from the book (pages 94-96)  Secret Weapon; How Economic Terrorism Brought Down the U.S. Stock Market and Why it Can Happen Again:

One instrument that works hand-in-glove with both dark pools and naked sponsored access is high-frequency trading based on computer algorithms. Traders use sophisticated computer programs to profit from any price differentials between dark pools and the major exchanges, typically conducting these trades via sponsored access on the exchanges. Thus, a price change in a dark pool can quickly be mirrored on the exchange and vice versa. This exacerbates the problems of anonymity, as it adds an additional layer of secrecy between the trader and the trade. It also exponentially increases market vulnerability.

Few people really know how trading algorithms operate, including their users. The complex algorithms are designed to profit from minuscule price differences and lightning fast trading. According to a Wharton Business School article,

It sounds like science fiction—something from I, Robot or The Terminator, where the machines take over. But totally automated "high frequency trading" is part of the stock market right now—a big part. According to some estimates, high-frequency trading by investment banks, hedge funds and other players accounts for 60% to 70% of all trades in U.S. stocks, explaining the enormous increase in trading volume over the past few years. Profits were estimated at between $8 billion and $21 billion in 2008 . . . . Trading is so fast that some firms locate their server farms near the exchange's computers, to shorten the distance orders must travel through cables at light speed.

While high-frequency trading may increase liquidity and help price discovery, there are also risks. For one, as nearly everyone knows from personal experience, computers can glitch. Another problem is that the trading speed creates the appearance of greater volatility, potentially scaring investors out of the market and reducing the amount of capital available to invest. Another serious problem is that computers can be hacked and manipulated, as shown recently by the attempted theft at Goldman Sachs by Sergey Aleynikov. According to police reports, Aleynikov tried to walk out the door with a pocket flash drive containing Goldman's proprietary trading codes. According to an analysis by the Tabb Group,

There's no doubt that Goldman Sachs, or any other proprietary trading firm, could indeed lose tens of millions of dollars from its proprietary trading if their strategies are stolen—and that is very serious. The competitors that obtain access to these trading secrets could (and would) use it to front run or trade against it, ruining even the most well-planned tactics. This news story contains many very important sub-plots: trading espionage, the necessity for a trading firm to have sophisticated security systems built around its technology, the requirements for risk management, and even the potential for proprietary trading software to be targeted on a wider scale for terrorist activity; but more than anything else it highlights the critical role played by high frequency prop trading in this new market.

The point is this: a relatively simple attack—such as an employee walking out the door with a computer flash drive—could potentially manipulate a major firm's trading programs even for the purposes of terrorist activity. Given the recent explosion in high-frequency trading, this must be considered another potential secret weapon.

All agree that computer trading can create volatility. Most agree that computer trading can cause a market crash. All agree that computers can be hacked–there is no 100% safe system. We have proof that the Chinese and others have already cracked our most significant systems including the stock markets. Now, couple that with the ABSOLUTE PROOF we have that enemies maintain the motive, means, and opportunity to crash our stock market. In fact, it is Chinese military strategy to use a "single man-made stock market crash" as a weapon. This strategy has been adopted by many others including radical Islamists, and elements in Russia, Iran and Venezuela. In fact, this is a central theme of Secret Weapon.

We still don't know the real cause of the "Flash Crash." We may never know exactly what happened with Knight Trading. It could even have been a weapon being packed that accidentally went off early. Regardless, please be certain. This "‘Knightmare' on Wall Street" will look like a walk in the park compared to the devastation of a full-blown attack on our markets. All this did is show just how vulnerable we really are.

The worst part of all of this is that the stock market is likely NOT the focus of the end-game attack. Yes, a stock market attack will create short-term panic but the stock market can and will recover as we have seen. Our enemies know this and have their sites set on the much bigger target of the U.S. Treasury and the dollar itself. This is what we call PHASE THREE, an attack designed to destroy America as we know it.