Like a Frog in the Kettle; We Are Losing Economic Leadership

Today, The New York Times reported that U.S. Economic Primacy seems to be Ebbing with China and others rising rapidly. This is their conclusion after surveying world leaders at the spring meetings of the International Monetary Fund and World Bank. Here are excerpts:

At Global Economic Gathering, U.S. Primacy Is Seen as Ebbing

WASHINGTON — As world leaders converge here for their semiannual trek to the capital of what is still the world's most powerful economy, concern is rising in many quarters that the United States is retreating from global economic leadership just when it is needed most . . .

"It's almost handing over legitimacy to the rising powers," Arvind Subramanian, the chief economic adviser to the government of India, said of the United States in an interview on Friday. "People can't be too public about these things, but I would argue this is the single most important issue of these spring meetings." . . .

Experts say that is giving rise to a more chaotic global shift, especially toward China…

"This is really about a crossroads for America and its leadership for the world," said Representative Dave G. Reichert, Republican of Washington. "We set the tone, we set the path for the global economy by being leaders. And if we don't, other countries step in."

The costs could be real. Failure to bolster the I.M.F. and other institutions weakens the West's hand in confrontations like the one with Russia over Ukraine, which has begged for multilateral economic assistance. Senator Lindsey Graham, Republican of South Carolina, pointed to conflicts like the one in Syria, suggesting that fears the I.M.F. and World Bank will be unable to help rebuild the shattered country only opens the door to confrontational actors like Iran….

For years, China had threatened to establish institutions to rival those dominated by the West, like the I.M.F., World Bank and Asian Development Bank — or even to establish its currency, the renminbi, as a reserve currency to rival the dollar.

[Read the entire article at The New York Times….]

While this article makes several important observations, it virtually ignores one of the true causes behind the rapid decline of American economic power. The article almost gives the impression that China and her allies have been reluctantly forced to fill a vacuum caused by our failure. The reality is far more sinister as we have documented. The strategy to replace America was birthed in both Soviet KGB and Chinese PLA doctrine dating back decades. We have documented at length how Russia as early as 1998 and China in 1999 plotted to replace America as global economic leader. We have also shared how this was part of the Soviet plan (to use external economic weapons to undermine America) well before that as reported by Jan Sejna in his 1985 book, We Will Bury You. This is economic warfare, pure and simple. And we seem to be losing.

The reality of this warfare has sadly been missed by American policymakers and leadership. The changes have seemed too subtle to be recognized. Only now has the heat been turned up high enough to cause serious damage. Unfortunately, like the frog in the kettle most have missed the gradual warming. 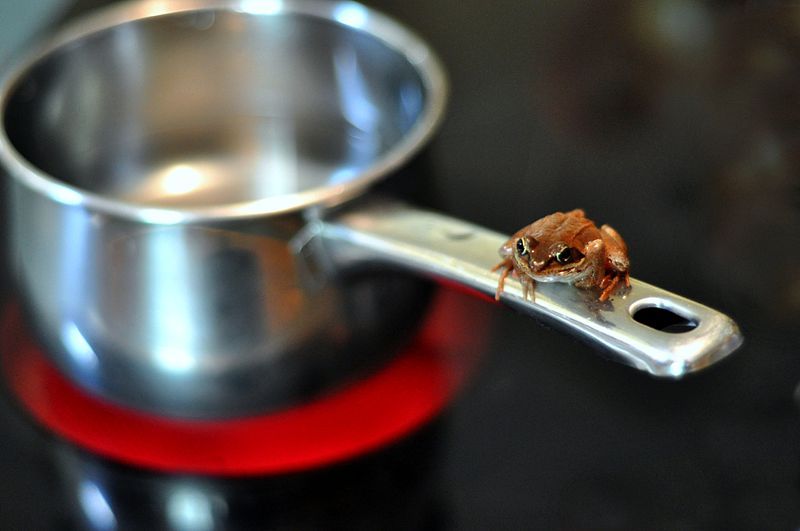 In the past few days, however, it has started to feel as if we are being cooked. We shared what Larry Summers wrote in an Op-Ed for The Washington Post. And Zero Hedge has been connecting the dots.

Here are some examples from yesterday:

…Perhaps even more interesting — and more alarming for Washington — is that the move by China to expand the yuan's influence via a fund that is now backed by nearly every major country on the planet save the US and Japan, comes just as petrodollar mercantilism, which has been perhaps the driving force behind dollar dominance for decades, crumbles in the face of slumping oil prices. As we've reported on several occasions, 2014 marked the first year in nearly two decades that oil producers' petrodollar exports (i.e. the recycling of oil proceeds into USD assets) turned negative. In other words, falling oil prices mean producing nations are now removing liquidity from the system rather than adding it, a process Goldman estimates will sum to nearly $900 billion by 2018.

The combination of these two forces could serve to cause a dramatic shakeup in a world that heretofore functioned on a unilateral system, both politically and economically.

Zero Hedge also points out how even the fall in oil prices is a threat to the dollars. Since oil is priced and sold in American dollars, lower global prices reduces the demand for our currency and leaves oil exporters with fewer excess reserves to invest in Treasury bonds.

The Collapse Of The Petrodollar: Oil Exporters Are Dumping US Assets At A Record Pace

Back in November we chronicled the (quiet) death of the Petrodollar, the system that has buttressed USD hegemony for decades by ensuring that oil producers recycled their dollar proceeds into still more USD assets creating a very convenient (if your printing press mints dollars) self-fulfilling prophecy that has effectively underwritten the dollar's reserve status in the post WWII era. Here's what we said last year:

Two years ago, in hushed tones at first, then ever louder, the financial world began discussing that which shall never be discussed in polite company – the end of the system that according to many has framed and facilitated the US Dollar's reserve currency status: the Petrodollar, or the world in which oil export countries would recycle the dollars they received in exchange for their oil exports, by purchasing more USD-denominated assets, boosting the financial strength of the reserve currency, leading to even higher asset prices and even more USD-denominated purchases, and so forth, in a virtuous (especially if one held US-denominated assets and printed US currency) loop…

As we said back in February, "…few actually grasped the implications of what plunging oil really means in a world in which this most financialized of commodities plays a massive role in both the global economy and capital markets, not to mention in geopolitics, with implications far, far greater than the amateurish ‘yes, but gas is now cheaper' retort." In the end, the real question may be this: what happens socially and politically in EM oil-producing states when, after years of depressed prices, the coffers finally run dry?

When you put it all in context, we are witnessing a dramatic shift in the economic world. It seems to have happened all of a sudden. The reality, however, is that the heat has been rising for quite some time. Will we notice before it is too late?

In Game Plan; How to Protect Yourself from The Coming Cyber-Economic Attack, we outlined an eight-step plan to restore American greatness. But we must act quickly.