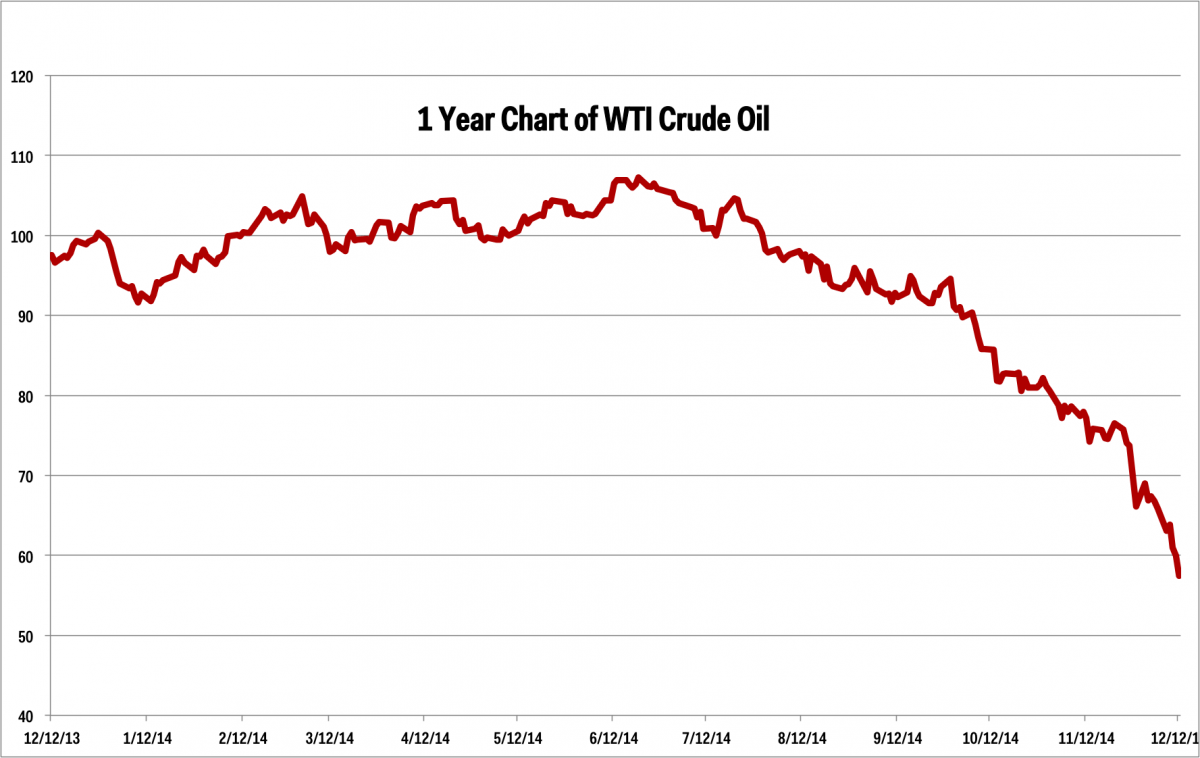 A comedian once said that the concept of mixed emotions was best defined as "watching your ex-spouse's attorney drive over a cliff in your new Mercedes." That's just a joke and about an unhappy tragedy. But the current plight of the oil market is real and it SHOULD stir mixed emotions for most Americans.

There's no doubt that lower oil prices can be a boost to our economic growth. In fact, referencing the 2007-08 oil price climb I said "at $50 per barrel our economy hums. At $100 per barrel, we do okay. When it's $150 per barrel, we start to crater." Given that, you might assume that we now see the rapid drop toward $50 as an unequivocal good thing. Things have changed, however, for the better in many ways but also making lower prices not perfectly beneficial.

To understand why we have mixed emotions, it is necessary to understand the power of our free market economy. Higher prices bred innovation, both in terms of ways to use less oil but also in ways to produce more oil. In fact, over the past five years a tremendously powerful domestic industry has developed to extract oil and natural gas from shale formations using hydraulic fracking. This entrepreneurial effort has catapulted America to the position of the world's largest energy producer. That's quite an amazing feat for an industry that had been in decline for decades and was once basically left for dead. That's the good news. The bad news is that the cost of production  is relatively high, especially when compared to cheap Middle Eastern extraction. What this means is that low oil prices are a threat to continuing development. What does that lead to? Higher long-term oil prices. According to the American Petroleum Institute, oil might have been as high as $150 per barrel last year if the American shale industry didn't exist.

Some claim that the Saudis have allowed (and even encouraged) the oil price collapse to crater our fracking efforts. This was threatened by Prince Al Waleed bin Talal in 2011 and is backed by recent comments from the Saudi Oil Minister who said that "OPEC Must COMBAT the Shale Industry." Beyond that, there is also a belief that the Saudis want to use lower prices to punish Russia and Iran for their role in supporting Syria's Assad. Finally, some have argued that the Saudis have promoted lower prices to get a "cheating OPEC" in line. There's no doubt that the OPEC nations have each gone over quota. Letting prices collapse is one way of reinvigorating discipline.

A few things are certain. The Saudis do have the ability to impact oil prices either through jawboning or by outright reduction in output. As the swing producer, Saudi Arabia can threaten and accomplish a tightness in supply. Conversely, they can promise or produce an excess supply. This gives them a good deal of pricing power. So, if we can assume they want lower prices now, are they getting the impact they want?

First, let's look at Russia. The ruble is in a literal free fall. The Russian Central Bank has raised interest rates dramatically but this has done little to protect their currency. We can assume Iran is under stress, partly because we know that they need at least $80 and maybe $100 per barrel to meet their budgeted expenditures. This is an oil dependent economy. The following chart shows how many rubles it takes to buy a single dollar. 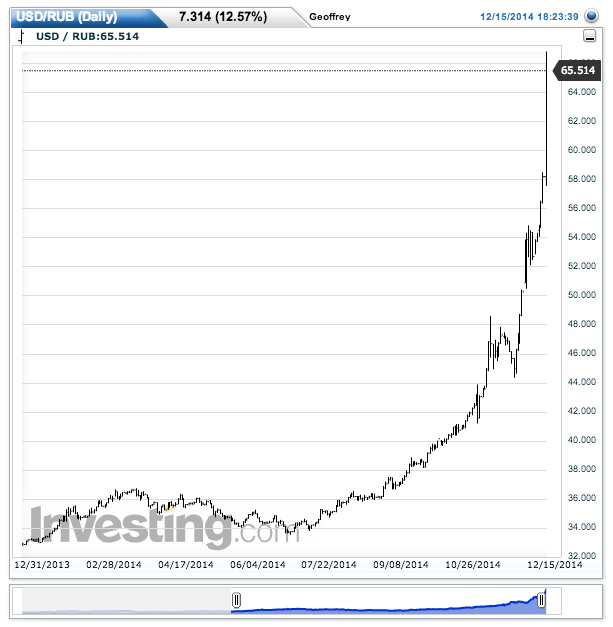 Now, is the lower price impacting America's future energy production? Absolutely. We are already seeing it.

Can Saudi Arabia survive a lower oil price? Yes, because they have a large pile of cash reserves.

What are the risks? Collapse in Russia, military response from Iran, global instability? All of these are possible. And what if the "moderate" Arab nations fall to ISIS due to domestic unrest? Is that in the world's best interest? It is certainly an ISIS goal.

Who benefits from lower oil prices? It will add to global GDP, shift in states, and might even revive Europe? But at what price? Is it really in our long-term interests to allow the Saudis to fully regain pricing power? What if Russians retaliate? We've seen the threats from North Korea over a possible movie release by Sony Pictures. The Russians have a great deal more at stake and a very large nuclear arsenal.

What should we do?

This is a national security imperative. It demands a response but few are even considering how to protect America from economic warfare. It's time to wake up to this reality.

Make no mistake, a financial war is underway (http://video.cnbc.com/gallery/?video=3000339497). It will have powerful implications and you need to be prepared.

We don't give investment advice in this Blog but you should review the implications of these issues with your investment advisor. Unfortunately, most advisors are also unprepared to deal with geopolitical challenges like this. The National Security Investment Consultant (NSIC) Institute is training advisors to better equip them for these challenges.

Keep in mind the Templeton maxim, "To buy when others are despondently selling and to sell when others are greedily buying requires fortitude but pays the greatest potential reward." Sir John Templeton was a great investor and profited from all types of markets. Here is a brief video that tells his story (http://click.e.frk.com/):