More Flexibility After the Election?

We have already established that some environmental efforts are foreign financed with the purpose of harming our domestic economic interests. This fits with a broader strategy of economic warfare (see http://secretweapon.org) that we have been reporting on. To catch up, review the following posts:

As a recap, we have evidence that the KGB began financing environmental groups decades ago and that the process likely continues today. We know that Putin hates the technology behind America's energy boom (hydraulic fracturing or "fracking") because it diminishes his energy monopoly. We know that some are suspicious that Putin crashed a Polish Government plane to slow the development of their natural gas shale deposits. We know that the UAE has funded an "anti-fracking" film in the United States. We know that the Department of the Interior was considering stopping development of oil and gas resources in the Permian Basin centered in West Texas by declaring a two-inch lizard to be "endangered."

Putin's interest in energy has even increased lately as demonstrated with his recent purchase of TNK-BP through the Russian State Oil Company (Rosneft). There is some analysis that suggests that Putin is being very aggressive in creating a global energy dominance that could greatly harm America's geopolitical interests. If true, it would certainly explain why Putin is so strongly against American energy development.

Putin Is the New Global Shah of Oil

Exxon Mobil is no longer the world's number-one oil producer. As of yesterday, that title belongs to Putin Oil Corp – oh, whoops. I mean the title belongs to Rosneft, Russia's state-controlled oil company.

Rosneft is buying TNK-BP, which is a vertically integrated oil company co-owned by British oil firm BP and a group of Russian billionaires known as AAR. One of the top-ten privately owned oil producers in the world, in 2010 TNK-BP churned out 1.74 million barrels of oil equivalent per day from its assets in Russia and Ukraine and processed almost half that amount through its refineries.

With TNK-BP in its hands, Rosneft will be in charge of more than 4 million barrels of oil production a day. And who is in charge of Rosneft? None other than Vladimir Putin, Russia's resource-full president . . .

With a snap of his fingers, Putin had created a national oil giant, a vehicle through which he could pursue his plan to reassert Russian influence in the world by controlling other countries' energy needs. The pending TNK-BP deal is simply the next step in this plan. If Rosneft does buy TNK-BP, the state oil giant will pump almost half of the barrels of oil produced in Russia.

Gazprom in control of Europe's gas, Rosneft in control of its oil. A red hand stretching out from Russia to strangle the supremacy of the West and pave the way for a new world order– one with Russia at the helm.

It is not as far-fetched as it might seem – or as you might want it to be. If Rosneft does buy both halves of TNK-BP, it will become a true goliath within the global oil sector. All the little Davids who rely on its oil will be at Putin's mercy. Same goes for Gazprom as a Goliath in the continent's gas scene.

In this scenario, Russia could choke off supply to raise prices. Putin could play oil- and gas-needy nations off one another, forcing European nations to commit to long-term, high-priced contracts if they want secure supplies.

Or imagine this: Russia could join OPEC. Suddenly the oil cartel would control more than half of global oil production and most of its spare capacity. With that kind of clout, the nations of OPEC could essentially name their price for oil – and the rest of the world would simply have to pay.

The bottom line is that elements in Russia and the Middle East clearly do not want an American energy renaissance. That seems obvious. What has been less obvious is their ability to impact that production through our own environmental rules. Yet, it is only logical and the evidence trail clearly points that direction. After all, while it is illegal for foreigners and foreign governments to donate money to candidates (or at least it is supposed to be), there are no restrictions against donating to U.S.-based environmental groups. These groups, in turn, then can push an agenda that benefits their donors. That's essentially how the process works. Environmental groups  petition or sue for a species to be declared endangered and then the Federal Government enforces the action by shutting down any "threats" to the species. That process is not only continuing, but becoming much more aggressive.

Now, Senator Jim Inhofe has expanded our concerns with a new report that the government intends to ratchet up environmental restrictions during a second Obama term. He argues that these drastic restrictions have been put on hold because if implemented they would crater the President's chances of reelection.

Here is a link to a letter written by Senator Inhofe to President Obama:

Here is the report Senator Inhofe had prepared:

And here are excerpts from an article on this topic from The Hill:

Sen. James Inhofe (R-Okla.) on Thursday accused the White House of delaying new environmental rules until after the election in a bid to improve President Obama's reelection chances.

Inhofe, the top Republican on the Senate Committee on Environment and Public Works, has made curbing various emissions rules one of his top legislative priorities.He said Thursday that the cost of potential new rules, combined with existing ones, "is probably greater than the cost of servicing" the nation's $5.3 trillion deficit.

Inhofe told "Fox and Friends" that the administration is intentionally stalling on the rules to keep voters in the dark about their costs . . . [Continue Reading….] 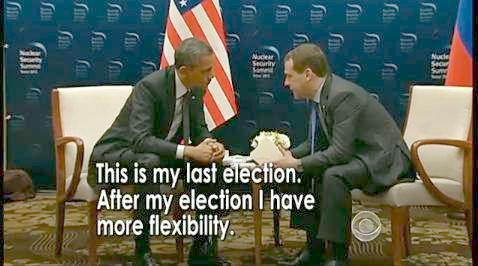 Now, add to that thinking the realization that environmental rules are a weapon of economic warfare. Some very interesting puzzle pieces begin to form a picture. If Senator Inhofe is right, the EPA, Department of Interior and others will be implementing a much more drastic environmental agenda after the next election. We know that Mr. Putin has an intention of seeing at least part of that agenda (as related to energy development) implemented as well. And, we know that President Obama has sent a message to Putin that was inadvertently broadcast. He said that he would have more flexibility AFTER the election. The Russian PM promised to tell Vladimir. Take a listen…. Very concerning…..Has a Russian IO been able to implement its agenda through our political process? Environmental efforts seem noble and are no doubt considered worthy by many including the current Administration. But, is it possible that they are naively falling for Putin's plan?

Interestingly, DRUDGE REPORT has a headline out now regarding how the Russian people feel that Obama would be much better for Russia than Romney: