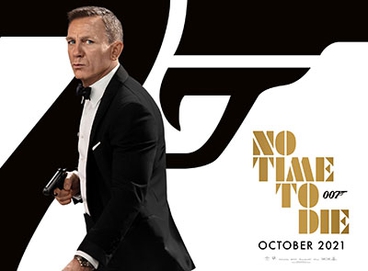 The final Daniel Craig installment of his James Bond was suspenseful and dramatic. Some thought the movie, "too woke for Bond." Overall, I enjoyed it but saw a little too much reality in the big menace portrayed.

SPOILER ALERT!!! This post will explain a bit about the not-too-fictionalized threat and share about the plot.

The bottom line is that the evil Bond villain was not preparing to hold the earth hostage with space lasers. Or to replace the President with an evil clone. Or to hypnotize the entire population via their cell phones. Those are all spy-thriller plots in line with a traditional Bond-style menace. Instead, what I saw onscreen was a threat that appeared to have been pulled directly from things we have been briefed on by experts in the Economic War Room over the past couple of years. In fact, China expert Gordon Chang was discussing this very thing in this past week's episode as shown in the clip:

As depicted in No Time to Die, scientists appear to be currently working on DNA-specific weapons. A virus that targets ethnicities or a specific individual (or family) appear to be more science fact than science fiction. And to realize that the Chinese Communist Party is preparing such weapons? Frightening! Imagine the havoc they could wreak. They could dominate the world simply by unleashing a virus or other pathogen and if they are allowed to progress, there is very little we could do to stop them. That already sounds all too familiar.

Then, after interviewing Gordon and seeing the Bond movie, I was confronted with the US Intelligence assessment that China is (as we long suspected) harvesting DNA information to build the world's largest genetic database. From the New York Times last week:

U.S. Warns of Efforts by China to Collect Genetic Data

BETHESDA, Md. — Chinese firms are collecting genetic data from around the world, part of an effort by the Chinese government and companies to develop the world's largest bio-database, American intelligence officials reported on Friday.

The National Counterintelligence and Security Center said in a new paper that the United States needed to better secure critical technologies including artificial intelligence, quantum computing, semiconductors and other technologies related to the so-called bioeconomy….TO CONTINUE READING (subscription may be required)…

Now consider what happens if the Chinese were to develop a targeted synthetic disease even deadlier than Covid-19. It could be ethnically specific just as Gordon Chang described.

It's getting all too surreal. Is this science fiction or a clear and present danger? An entertaining way to better understand the lethality of a bioweapon of this type might be to take a couple of hours and head to see Daniel Craig. The plot is entertaining, frightening, and thought-provoking. Or, you could watch the current Episode of the Economic War Room, available on BlazeTV (subscription required, use the code ECON for a discount), LiftableTV (subscription required), XOTV (free), or YouTube (free). But be sure to also download the free Economic Battle Plan™. By the way, this isn't the first time that this has come up from experts in our War Room. Bill Gertz covered a similar topic with us months ago.

The bottom line is that what was once considered science fiction has frighteningly become science reality. The real life (not Bond movie) villain is the Chinese Communist Party. And the saddest part is that we have been funding their weapons development through grants and investments. We must stop this NOW! Learn how Gordon Chang suggests that we as a nation counter this threat by reading our free Economic Battle Plan™. Does this Administration have the resolve to do what's necessary?