Playing for Keeps: The Plot to Destroy Our Constitutional Republic (Part One) 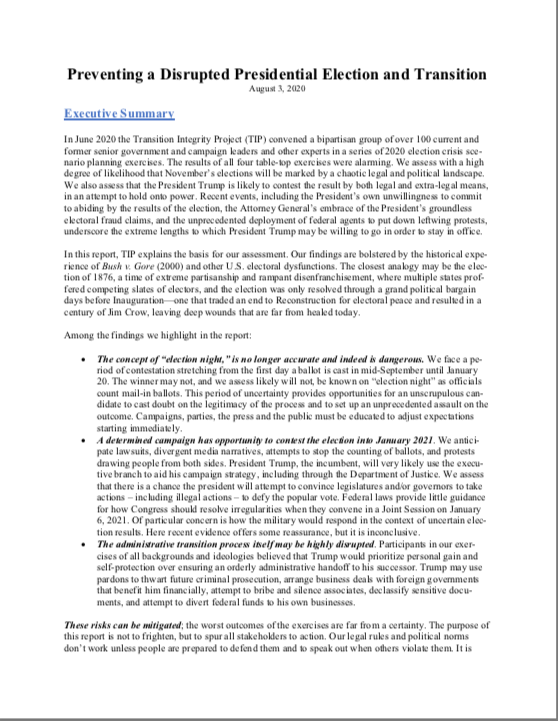 For anyone with "eyes to see" and "ears to hear," the Deep State plans for after a Biden win are more than obvious. They have been telegraphed for weeks, including the Nancy Pelosi-led effort to create a 25th Amendment Commission. All of this is well planned and orchestrated. It is an extraordinary effort to literally supplant this once-free nation with something we won't even recognize. We will walk through some of the telltale signals in this blog (and also in Part Two to come).

What may be less obvious, however, is that other scenarios have been game planned as well. From the people who brought you the Russian Collusion Hoax and the phony Impeachment scandal, there is a contingency plan for any and every outcome of the November election. In each case, the clear intention is to dramatically and permanently change America. The end result would be a Marxist, technocratic dictatorship appearing as an Orwellian nightmare. Some might argue, a "Brave New World" nightmare even beyond the imagination of Aldous Huxley. Essentially, the elitists will package it as democracy but it would surely emerge as tyranny.

That sounds hyperbolic, so let's unpack it. First, the "Game Plan" is absolutely true, brought to you by the nefarious and ironically named "Transition Integrity Project." It sounds so nice! But it is a clear and present danger to our Constitutional Republic. As we will see (with startling new findings), they have ZERO interest in transition integrity. Quite the opposite. This is wholly about seizing power.

Just what is the Transition Integrity Project (TIP)?

Here is their own description taken from direct excerpts of the TIP report:

In June 2020 the Transition Integrity Project (TIP) convened a bipartisan group of over 100 current and former senior government and campaign leaders and other experts in a series of 2020 election crisis scenario planning exercises. The results of all four table-top exercises were alarming….

The Transition Integrity Project (TIP) was launched in late 2019 out of concern that the Trump Administration may seek to manipulate, ignore, undermine or disrupt the 2020 presidential election and transition process. TIP takes no position on how Americans should cast their votes, or on the likely winner of the upcoming election; either major party candidate could prevail at the polls in November without resorting to "dirty tricks." However, the administration of President Donald Trump has steadily undermined core norms of democracy and the rule of law and embraced numerous corrupt and authoritarian practices. This presents a profound challenge for those – from either party – who are committed to ensuring free and fair elections, peaceful transitions of power, and stable administrative continuity in the United States.

In June 2020, TIP organized four scenario exercises to identify risks to the rule of law or to the integrity of the democratic process in the period between Election Day (November 3, 2020) and Inauguration Day (January 20, 2021), with an eye toward mitigation and/or prevention of worst-case outcomes.

At this point it seems possible that either candidate may achieve a decisive electoral victory, but the goal of TIP's scenario exercises was to gain a better understanding of the tests our democratic institutions could face in the event that candidates defy the norms that have underpinned American political practice for decades. Specifically, TIP wanted to examine some of the unknowns: How far might candidates go in contesting negative electoral outcomes or disrupting the normal transition process? How well would American institutions hold up if one or both candidates refused to "play by the rules"?

The four scenarios were developed after a consultative process involving outreach to experts on elections and transitions, political violence and instability, governance, and scenario planning and game design. Each of the four scenarios developed was different….

If you didn't know better, they make it sound like a plan to defend, rather than subvert, the Constitution. But if you look closely, it quickly becomes apparent that the goal is radical anti-constitutional change regardless of the election outcome. And don't take my word for it. Read the ENTIRE DOCUMENT carefully HERE. And just to verify, Here is MSN's link to the TIP report. And here is ANOTHER LINK to the same report. And ANOTHER, just in case one or more "disappear." And here is a rational commentary: Democrats are Telling Us They Will Not Accept a Donald Trump Win. Are You Listening? And one from Fox News.

THIS REPORT IS SO UNBELIEVABLE, AND YET VERY FEW IN AMERICA KNOW THAT IT EXISTS. EVEN FEWER UNDERSTAND THAT EARTH-SHAKING IMPLICATIONS! THE TRUTH MUST GET OUT BEFORE IT'S TOO LATE!

A few things to note about the TIP Report:

All of this suggests that a Trump victory, including winning the popular vote, has to be on the table despite what the biased media and polls would try to suggest. And yet, this wasn't even considered as a possibility. Why? Is it because this group was assuming some sort of election fraud? Sadly, that is a very real possibility in this election cycle.

One other concerning thing about the Transition Integrity Project report is something that is not said directly but clearly seems to be implied. That is, the progressive left has a plan to prevent a Trump second term under any and all circumstances (even including the use of violence). Hillary Clinton offered some advice for Joe Biden: Don't concede under any circumstances! Not under any circumstances????

Really? If the TIP was truly concerned with Transition Integrity, why didn't they address this? Actually, they did by fully endorsing the sentiment.

Plus, there is newly released documentation that clearly shows the Obama White House considered NOT HANDING THE REIGNS to a duly-elected President Trump. We now know that they concocted a Russia-collusion hoax to hurt his chances to be elected (and distract from Hillary's email woes).  But it's even more shocking to hear that the highest levels actually considered not allowing a peaceful transition of power. That's the very thing they have already begun to attack Trump over. Talk about projection!

An exclusive report based on a senior Department of Defense official's account – the coup plotters considered never transferring power to the President-elect of the United States of America.

Recent revelations, including the declassification of key documents, have effectively ended any speculation about what really transpired in 2016 and 2017 in regard to Donald Trump and spurious allegations of Russian collusion. The story was a fabrication. None of it was ever true. There really was a conspiracy, and we really did witness the first attempted coup in American history.

Information uncovered within the last few days by AND Magazine adds significantly to our understanding of the scope of the conspiracy and suggests strongly that subsequent to the election of Donald Trump there was serious consideration given to simply not transferring power to the President-Elect.

According to a former senior Department of Defense official interviewed by AND Magazine, in the wake of Donald Trump's "surprise" victory in November 2016, a National Intelligence Estimate (NIE) was rushed through pushing the false Russian collusion narrative and asserting as the judgment of the Intelligence Community as a whole that the Russians had not only interfered in the election but had done so in order to assist Donald Trump and help him become President. We have known for some time that this NIE was drafted, what we now know is considerably more about the highly unusual way in which it was drafted . .

…one of the committee's taskings was to develop a plan to delay and/or reschedule the inauguration. While the official to whom the call was made ultimately deliberately avoided attending committee meetings, he did see subsequent Top Secret email traffic that showed significant inter-agency discussion of the possibility of not proceeding as scheduled with the transfer of power.

At some point, this idea appears to have been dropped in favor of proceeding with the strategy of creating an impeachment narrative, but for months apparently there was significant discussion of the possibility of simply not handing over the Presidency to Donald Trump."

WOW! Since these are basically the same people, it is entirely clear that they ARE NOT interested in Transition Integrity. Quite the contrary, four years ago they considered a blatant and outright coup, but instead settled for their "insurance policy" with the Mueller investigation, the Steele dossier, and planned impeachment efforts. They now see that as a miscalculation. The TIP is proof that they do not intend to accept another loss under any circumstances.

Another direct implication from the TIP report is the seeded expectation that Biden will win the popular vote, no matter what. The only way to get to this conclusion, in my view, is through the expectation of the "fix" being in. This suggests election fraud, massive ballot harvesting, and massive voter fraud. Many point to Hillary Clinton's popular vote victory in 2016 as proof that Trump will lose (even though a number of Americans have decided to support Trump this go around). And remember that her "victory" came primarily from states with very questionable electoral practices. No one bothered to look at what fraud may have taken place in Democratic strongholds such as California, New York, or Illinois because the vote did not change the outcome in the Electoral College. But now, according to the TIP report, an Electoral College victory should be deemed insufficient.

Again, WOW! The so-called Transition Integrity Project purposely seeks to undermine the Constitution of the United States, which is the highest law of the land. If we went to a nationwide popular vote, we would essentially allow these Democratic strongholds to own all future elections. It is a small thing for California to come up with an extra 1-2 million votes. They do that with voter harvesting, or lax laws on non-citizen voting, or simply looking the other way on outright fraud. Judicial Watch uncovered "millions" of extra registrants on voting rolls, most in California. Even after purging the rolls in response to court order, San Diego County still had 117% registration, meaning "they have more voter registrations than citizens living there and old enough to vote." According to Judicial Watch, there are 378 counties with 2.5 million registrations beyond the 100% of eligible citizens mark. Not surprisingly, these are primarily Democrat-controlled states. Across the United States, an average American registration rate is about 66.9%, so over 100% anywhere should be a massive red flag.

By the way, think about this. If another state has lax fraud controls and we are subjected to popular vote majority rule, your vote can be cancelled out by another's state official where you have no voice or recourse. In 2016, Clinton's California margin accounted for over 150% of her 2.8 million national popular vote surplus.

The Threat of the TIP Regardless Even if Trump Wins

Here are some of the suggestions from the project in the case that Trump clearly wins the Electoral College vote:

This is unbelievable! This calls for the direct undermining of the U.S. Constitution and a duly re-elected President of the United States. Essentially, this is a plot for treason! There is no other way to look at it.

What Can We Do?

As always, you must be aware. Research this for yourself. It's on the Internet for anyone to see. And there hasn't been any Democrat-led effort to distance from the so-called "Transition Integrity Project." Instead, it has been warmly embraced.

Here are your five assignments:

My last Blog Post covered what has been happening the past four years and why it is Way Worse than Watergate. You should go back and read that one again because it shows just what these people are capable of. This blog (Part One) explains what this cabal will do if Trump wins reelection. It's frightening! In Part Two (the next blog), we will explore their plan in the case that Biden actually wins in the Electoral College. It's even worse. Stay Tuned!