The Economist has an interesting story in their December 31, 2011 issue titled Financial Terrorism; The War on Terabytes. The article does a good job of summarizing key points.

For starters, this article references the report we prepared for the Pentagon:

Officials' anxiety has grown amid circumstantial evidence that malefactors helped to exacerbate the market turmoil in late 2008. A report on the risks of economic warfare by Cross Consulting—which was written in 2009 for the Pentagon's Irregular Warfare Support Programme (IWSP) but which surfaced only in 2011—cites a paper prepared for law-enforcement officials by a group of anonymous moneymen who were alarmed by trading patterns around the time that Lehman Brothers failed.

The report under discussion is Economic Warfare:  Risks and Responses.The Economist article covers some of the most important points from the report:

1) Trading activity during the crash was highly unusual.

The paper analyses trading data from American exchanges. It shows that a handful of small and midsized regional brokers saw their market share in equities trading skyrocket in 2008 to the point where some were, for a while, doing more business than giants such as Goldman Sachs and JPMorgan Chase . . .

The bulk of the trading appears to have been "sponsored access" agreements, under which established brokers can in effect rent their identities to other traders so that the latter do not have to jump through the usual regulatory hoops. There is no suggestion that the brokers in question were doing anything wrong. They say they were doing business with regulated entities, including other brokers, but the report raises questions about the trades these sponsored entities were conducting.

These trades were heavily concentrated in big, troubled stocks such as Citigroup and Wachovia, the survival of which was seen as critical to the stability of the financial system. They were mostly short-selling, the paper concludes, and a good deal of the shorting may have been of the illegal "naked" kind, where the short-seller does not bother to locate and borrow the shares first. (Borrowing a broker's identity could have made this easier, since marketmakers were exempt from the ban on naked shorting in certain circumstances.) Supporting this conclusion is a huge spike in trades that failed to settle at the time—in Lehman's case, the number shot from tens of thousands to tens of millions. One cause of "fails" is naked shorting, because you cannot deliver a share that you have not really borrowed.

2)  There have been unusual incidents since then.

The "flash crash" of May 6th 2010, in which American equities spectacularly nosedived, showed the damage that can be done by high-speed algorithmic trading. It is much easier to drag markets down when they are already reeling, by the use of such things as short-selling, options and swaps, points out James Rickards of Tangent Capital, an expert on financial threats. This is what the military would call a "force multiplier".

3)  The government response is fragmented at best, absent at worst.

What is clear is that politicians, regulators and the industry have struggled to forge a coherent response. The Financial Services Sector Coordinating Council (FSSCC), an industry group that works under the auspices of the US Treasury, has developed a "threat matrix" in consultation with a group of financial regulators with an equally snappy name, the Financial and Banking Information Infrastructure Committee. But information is not always shared promptly. Banks were miffed that regulators did not tell them about a big attack on NASDAQ in 2010 until more than three months later.

Within government, responsibility is fragmented. In America the Treasury, other financial regulators, the Department of Homeland Security, the Pentagon, the FBI, the National Security Agency and others all have a hand in financial cybersecurity. Dots are not always joined even within departments. The Treasury has been keenly focused on combating the financing of terrorists, for example, but appears to have given less thought to how they might use that money to undermine banks and markets. That is unfortunate. As policymakers wrestle to protect finance from its own instability, they shouldn't neglect the potential for threats from outside.

We have been making these key points for over three years. Having The Economist provide reasonable coverage of the issue is a positive. This story is not over–not by a long shot. In fact, there is a Financial Times article today that states that there will likely be another flash crash coming:

But to this day, nobody has fully explained what really happened on May 6. Nor is there any evidence that the fundamental problems that caused the flash crash have been resolved. That leaves some scientists fearing that not only is a repeat of that flash crash possible, but it is probable — and next time round, it could be even more damaging.

We still don't know precisely what caused the flash crash that wiped out almost 10% of stock values in a few minutes. The thought that it could recur with a more damaging outcome is unsettling to say the least. 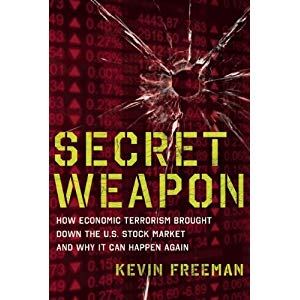 Hopefully, the release of Kevin D. Freeman's new book, Secret Weapon, will give the issue the spotlight that it deserves. The book covers all of the issues from this Blog and will be released on January 16th. It can be ordered from Amazon.

The book explains in layman's language all the key terms including Credit Default Swaps, Naked Short Selling, Derivatives, Sponsored Access, High Frequency Trading, dark pools, the Arboon, and Rogue Traders. It should be remembered that none other than Warren Buffett once described credit derivatives as "financial weapons of mass destruction."

If Buffett is right (and he is), why aren't we keeping these financial WMDs out of the hands of terrorists? This is the question of the decade.