Putin and the King 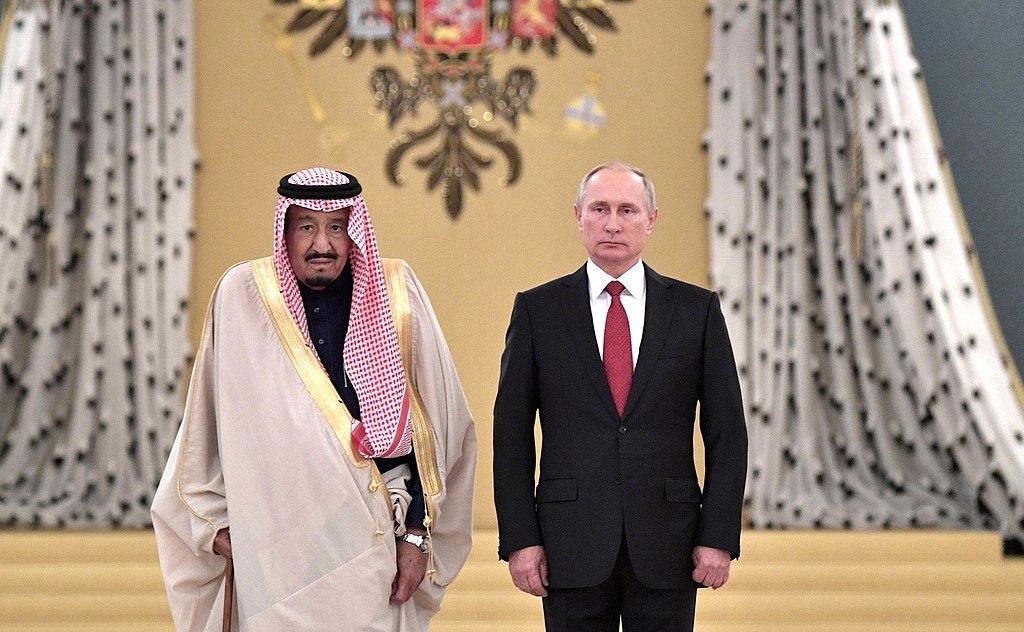 Our last post, A Conspiracy Against the Dollar?, outlined some of the efforts underway that seem intended to undermine the U.S. dollar as primary reserve currency of the world. Things became a bit more concerning when it was announced that Saudi King Salman bin Abdulaziz was in Moscow to visit Russian President Vladimir Putin. That is significant. He is not scheduled to meet with President Trump until next year.

Consider this from Bloomberg:

The Saudi courtship of Russia reflects a convergence of interests between the world's two largest oil exporters as the output pact between the Organization of Petroleum Exporting Countries and non-OPEC producers has spurred a recovery in crude prices. King Salman's journey to Moscow, ahead of planned talks with President Donald Trump in Washington early next year, is also a recognition by Riyadh of the changing political balance in the Middle East after Putin successfully countered indecisive U.S. efforts to topple Syrian leader Bashar al-Assad.

"Is there really anything in the world that's absolutely permanent?" Putin told an energy forum in Moscow on Wednesday, in response to a question about whether Saudi Arabia will always align with the U.S. on geopolitical issues. "It seems to me, on the contrary, that everything's changing."

King Salman, who arrived for the four-day state visit late Wednesday, called Russia a "friendly" country. He told Putin, who accepted the king's invitation to visit Saudi Arabia, that their talks will boost the global economy as well as aid international stability and security.

It wasn't that long ago that Saudi King visited Beijing while the Crown Prince went to Washington. In Middle East culture, this could easily be interpreted as a direct insult to America. The King focused on China while the number two visited the United States. Now, we have the King visiting Russia and Putin ahead of America and President Trump. [President Trump did visit with the King earlier this year in Saudi Arabia.] While this could simply be a matter of scheduling and not an intentional diplomatic message, there should be at least some concern regarding any possible message being sent.

Several years ago, we warned that Putin was working to remove the dollar from energy trading. Of course, this required an outreach to the Saudis. At the time, traditional national security commentators suggested we were wrong because Putin supported Iran and the Saudis would oppose him for that. Yet, we continued to see evidence that we were right. In our view, the play is Russia and China working together to undermine the U.S. dollar over the longer term. To achieve that, they need to undermine the petrodollar and this requires Saudi cooperation. Russia is a large producer of oil and the Chinese are large consumers. But to truly impact the global market, you need the Saudis (the long-run largest producer) and Venezuela (holder of the largest reserves). Now, with the Saudis seeking investment in Aramco (most likely from China), the relationships are beginning to set.

In addition to the above, Russia is also positioning chess pieces with Iraq's Kurdistan and Venezuela. The goal is global energy leadership, adding to a serious relationship already with Iran. And, contrary to previous speculation, having a relationship with Iran is NOT a disqualified to the Saudis (as noted in the Bloomberg article):

The Saudi king "won't demand the impossible" at his meeting with Putin, said Irina Suponina, a Middle East expert at the Russian Institute of Strategic Studies, which advises the Kremlin. "Saudi Arabia is aiming for real cooperation with Russia and understands that you can't split Russia from Iran," she said.

Remember, we used Saudi Arabia to help undermine the Soviet Union at the end of the Cold War. Vladimir Putin considers the demise of the Soviet Union to be one of the greatest tragedies of the last century. He has plotted before to make America fall apart as the Soviet Union did.

All of this suggests a grand scheme to undermine American hegemony not too dissimilar to what Reagan did to the Soviets during the 1980s.

We should also remember that the Saudis deliberately attacked the American shale industry in 2014, starting an oil war. During the same time period the Russians were funding the anti-fracking movement. We can only imagine what purpose Salman and Putin have in meeting now.

The key to all of this is the displacement of the dollar as the world's reserve currency. We arrogantly assume that the dollar will always be king. But we should not turn a blind eye to the reality that other powers wish it were not so and have taken actions to make their wish come true. Only time will tell if the dollar can be undermined. But do not doubt that serious forces are attempting to undermine it.

Putin's comment on how nothing is permanent is a clear shot at American hegemony. And, he is a master at messaging. The courting of Saudi Arabia is no doubt an effort of payback he viewed as the tragic collapse of the Soviet Union. But this is not the only evidence we have a what appears to be a masterful plot to undermine America. The Democrats have singularly focused their concerns about Putin on how he may have influenced the election of President Trump. They ignored real and credible evidence of Russian interference prior to the 2008 election. And they made fun of Republican Presidential Candidate Mitt Romney when he warned of Putin.

We have only recently learned that Russia was behind Facebook posts and advertising designed to support riots and division in America via "Identity Politics." From Daily Caller (September 28, 2017):

Russia used Facebook ads in 2016 to both encourage and inflame identity politics in America as part of its cyber-operation against the U.S., according to new reports.

Then, on Thursday night, CNN reported that popular black activist accounts operating on Facebook and Twitter under the name "Blacktivist" were linked to the Russian government. Blacktivist accounts frequently stoked racial outrage about police shootings and mass incarceration of black men.

The Russian-funded accounts impersonated Muslim groups to promote anti-American conspiracy theories — such as that Osama Bin Laden was a "CIA agent" — while praising former Libyan dictator Moammar Gadhafi for not having a "Rothschild-owned central bank" — a reference to anti-Semitic conspiracy theories.

Even The (London) Times (September 29, 2017) recognized the threat this poses:

Thousands of Twitter accounts linked to the Kremlin were churning out material designed to splinter America along political, racial and religious lines yesterday, even as tech executives arrived at Capitol Hill to field questions on Russian meddling in last year's US election.

An analysis of 600 Twitter accounts linked by the German Marshall Fund, a think tank, to the Russian government has provided the most vivid insight yet into how the Kremlin is seeking to use social media to undermine western societies.

That revelation was last week. This week we learned that Kaspersky Labs security software may have created a vulnerability that allowed the NSA to be hacked. In turn, the NSA hacking has created all sorts of additional vulnerabilities. If this is true (and we have warned about this for years), there should be little doubt that Putin had his hands in it. This is a global cyber-economic war on multiple fronts with multiple players.

What Can We Do About It?

We've laid out a prescription that would certainly be effective if adopted in entirety. There are economic steps we must take. Building domestic energy resources, repatriating American corporate capital held hostage overseas by our tax code, genuine tax reform, and sound infrastructure improvement would clearly put us in a position to compete and win in the economic war. In addition, we need to return to teaching the miracle of America rather than just focusing intently on our historic failings. Certainly we shouldn't ignore our historic failures. But America is good, not evil. And how can we heal the divide without sharing a common understanding and purpose. Finally, and perhaps most importantly, we must return to God for healing and restoration according to Second Chronicles 7:14.

If we undertake such measures, we truly can work together to Make America Great Again. If we do not, however, we clearly risk the loss of the dollar's reserve currency status and the corresponding economic dislocations that will occur. The world is overdue for a global monetary reset. It should be on our terms and thus we can ensure that the 21st Century is an American Century as One Nation Under God.