It is Pravda that reported the headline regarding uniting Russia and China against the West earlier this month. Pravda was the official newspaper of the Soviet Union through 1991 and has been a Russian news source since. Here are excerpts from the article: 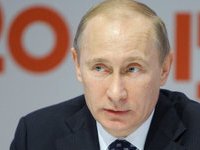 Russian President Vladimir Putin arrived in China on Tuesday, June 5th, for a two-day official visit. Putin plans to sign more than a dozen of various bilateral documents during his meetings with Chinese officials. On June 6-7, he will take part in the Beijing summit of the Shanghai Cooperation Organization, RIA Novosti reports.

During his visit to China, Putin will coordinate the positions of the two countries on Syria and Iran. As for the SCO, the sides will discuss the questions related to the penetration of extremists to Central Asia.

Putin is making the trip to China against the background of the surging crisis on the financial market and the increasing pressure that the West has been putting on Russia and China in terms of the Syrian and Iranian problems. To crown it all, the withdrawal of NATO's troops from Afghanistan may put the national security of the two countries at risk. The discussion of the most serious problems of international politics will show to which extent Russia and China are close to each other.

The two powers do not accept the policies of the West the main goal of which is to change "non-democratic" regimes. China and Russia share similar views on Syria and Iran. The same can be said about the role of the United Nations in international affairs. Moscow and Beijing stand against the interventions in Arab countries bypassing the UN.

The gist of the article is that there is a growing alliance between Russia, China, Syria, and Iran. These four nations have considerable clout, especially if they work together as Putin is planning.  In light of what we have already uncovered regarding global economic warfare, this meeting is of considerable significance. While in China, Putin also met with Iran's Ahmadinejad (http://my.news.yahoo.com/putin-meet-irans-ahmadinejad-china-123121248.html).

The United States is already engaged in an economic war with Iran as we have noted in previous posts (Iran's Secret Weapon Threat, Our Paper or Their Oil?). We are also fighting an economic war against Syria (http://www.businessweek.com/news/2011-11-30/syria-says-sanctions-are-economic-war-as-un-reports-abuses.html and http://niqnaq.wordpress.com/2012/05/02/usa-declares-economic-war-on-syria-and-iran-in-the-name-of-the-people-of-syria-and-iran-of-course/). As a result, the recently held summit in China is quite disconcerting.