Social Panic, Street Riots, and a Political Crisis–Part One

In the context of the social unrest following George Floyd's horrific murder, we have witnessed some righteous and appropriate indignation. Protests are a legitimate American expression guaranteed by the American Constitution. This is Freedom of Speech and Freedom of Assembly.

Sadly, in the midst of righteous protest, there have also been some very disturbing and destructive riots. This is lawlessness, not legitimate political expression. It is certainly sad that so many on the progressive left have attempted to justify or even underwrite such lawlessness. Fortunately, there are multiple voices of reason that reject the violence and theft. Let's hope they are heard.

There are several issues at play, and each must be addressed:

The only way to truly solve the race problem in America is to narrow the wealth gap, black economists say

The unrest in cities across the U.S. this week is just the latest manifestation of a struggle that will continue until the wealth gap between white people and black people is addressed, black economists said. What is the wealth gap? It is the stark divide between how much capital white people and black people control. By one estimate, the typical white family has wealth of $171,000. This is nearly ten times greater than the $17,150 for an average black family . . .

While I agree with the sentiment of addressing the wealth gap, this article goes on to suggest reparations as the solution, which of course is a step of socialism. We have focused several episodes of the Economic War Room on reducing the wealth gap. One that stands out was with Star Parker, Episode 58. Hers is the Free Enterprise solution coupled with spiritual revival in Christ. He solution will work far better for all concerned. 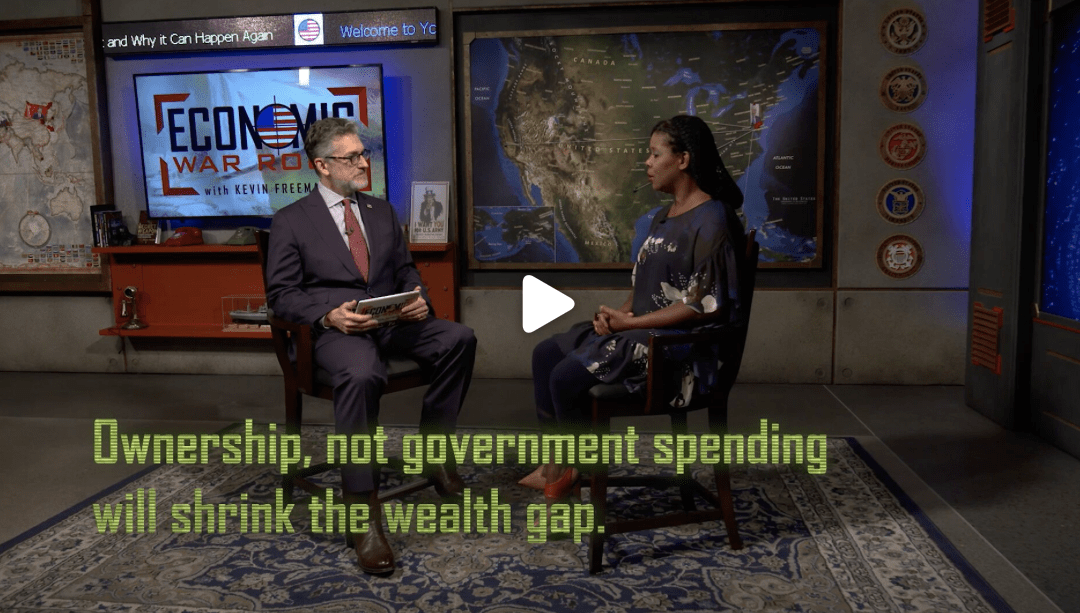 All of this created a cocktail of crisis, a flammable concoction just waiting for the match to strike. The tragic murder of George Floyd was the spark. But the match was provided by radical revolutionaries funded in part by Maoists and the anti-American elements who cannot afford to see a second Trump term. Radical leftists, the Deep State, the leftist media, and the Chinese Communist Party (CCP) cannot well survive four more years of President Trump. This is existential to them.

Think about it. We are less than five months from the election. And yet, rather than allowing the democratic process to take place, there is a push to so demonize President Trump, pulling out all the stops to remove him from office. The opposition knows the stakes involved. And they feared they would not win with a strong economy, and growing Trump approval among black Americans.

It is frightening what is being said and done to those who disagree with the radical mob. Here are just a few examples:

All of this is mob behavior. Mob behavior is how Hitler took Germany and the threatened the world. It is how communists captured Russia before that. And it is how the French Revolution killed so many.

This is a sad preamble to the main point, however. What you must know is that the mob behavior is not a natural response to the supposed racism of Trump and the evil of America. To prove that, simply look at the protests and riots taking place in cities around the world. Do you really think that things happening in Sydney or Paris or London are really caused by Donald Trump? Or, do you really suppose that America is the worst, most racist nation on the planet? If you do, you need to get out more. The United States is not the most racist, not by a long shot. That's a domestic media narrative but it isn't close to the truth. And Donald Trump is not the problem.

In 2013, the Washington Post ran a story featuring the work of two Swedish economists. They wanted to know if economic freedom made a nation more or less racist. Their findings? You can see for yourself in the map that the Post produced. America was on the lower end of the spectrum along with Canada, Scandinavian countries, much of Latin America, England, and Australia. On the higher end were Russia, China, India, along with several Middle Eastern and African nations.

None of this is to excuse racism in any form or any nation. We should not be "patting ourselves on the back" because our racism scores are comparatively better than other countries. But it does shed some light on the differentiation between peaceful American protests of a horrible murder and the mob violence that has burned multiple cities. I can only assume that the peaceful protestors would like to see a continued improvement in our nation. Let's follow the constitution, apply liberty, and demonstrate improvement for all citizens. The violent mob, on the other hand is pushing for the complete destruction of this nation. Tear it all down and start over. This is fueled by enemies, foreign and domestic.

The domestic enemies are obvious although they try to stay under the radar. They are the "Resist" movement started by former President Obama's loyalists and emerging as Indivisible, following the Saul Alinsky model. Look at their website. Top of the list is to defund the police. This group is teaming with people who want to tear it all down and start over. Be careful what you wish for. Every revolution started by mob rule has quickly morphed from anarchy to despotism.

The foreign enemy in this case is China. And everything we are seeing is straight from the Unrestricted Warfare playbook. We will cover this in part two ahead.