Let's just pull a few headlines from this week and see if they make sense.

First, the Dow Jones Industrial Average topped 14,000 and is closing in on all-time record high levels. That happened just today, here's the story:

"NEW YORK (MarketWatch) — U.S. stocks rallied Friday to cap a fifth week of gains that lifted the Dow Jones Industrial Average above 14,000 for the first time in five years . . ."

Now, this comes on the heels of the revelation that the American economy actually CONTRACTED in the fourth quarter of last year:

Economist Art Laffer Wednesday called the contraction in the U.S. economy "catastrophic" and predicted that it would continue to shrink without spending restraints and lower business tax rates. "You have the whole output of the economy shrinking. Not just expanding more slowly, it`s absolutely shrinking," Laffer told Fox News' Eric Bolling Wednesday. "That's catastrophic," the former adviser to President Ronald Reagan added . . . "It's amazing, isn't it? We spent $5.8 trillion in the last couple of years, and this is what we get for it," Laffer said. "Have you ever heard of a poor man spending himself into prosperity? It`s just dumb on the outset. Government spending, as [economist] Milton Friedman always said, is taxation," he continued. "Government doesn`t create resources, it redistributes resources. And this government spending stuff is why we have the great recession." "W. did just as bad a job as did [Obama], but Obama continued that bad job for four straight years. And this is the result," he added.

So how is this possible? It takes a lot of monetary printing that hasn't yet impacted the real economy but has gone into Wall Street's financial markets, first in bonds and now into stocks. This point was made clearly by Kyle Bass in a CNBC interview today. He was speaking to Tiger 21 (a group Kevin Freeman addressed two weeks ago discussing the risks of economic warfare). 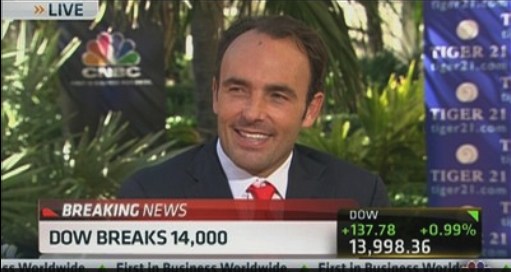 Here is a link to the video:  CNBC Interviews Kyle Bass. In this remarkable interview, Kyle explains the effects of Fed money printing and the best strategies for investors. Listen to the interview. He suggests virtually the same strategy we outlined in our book Secret Weapon in the conclusion chapter starting on Page 213. [To learn more about the book, go to http://secretweapon.org.] We posted on this topic here: https://globaleconomicwarfare.com/2011/07/all-that-glitters. Now, listen to Kyle and then read our post side by side. You can see that we are both discussing the serious inflation problem we are facing and how to respond. Keep in mind that the original paper presented on Economic Warfare clearly predicted that this day would come. We warned that the Federal Government would respond to the crisis by printing massive amounts of money and huge stimulus programs. That was the expectation of financial terrorists as well. We are that predictable. All of this leads to what we have described as a Phase Three attack on our economy using the Unrestricted Warfare strategy. The ultimate goal is massive social unrest. This is the ultimate result of massive monetary inflation. Here is a simple explanation from Dylan Grice of Societe Generale's Global Strategy Team (as provided by By Michael Skocpol on Advisor Perspectives):

….The core of Grice's thesis was his view of money: He doesn't define it merely in technical terms, as a unit of exchange or a store of value, but rather as something deeper. "Next to language, money is the most important way that we communicate with one another as a society," he said. "It's how we implicitly express our values: the value of other people's labor, the value of what other people have, and the extent of exchange that we have with each other."

As a result, Grice said, questions of trust are "fundamentally embedded" in the marketplace. "You're not going to exchange with someone if you don't trust them," Grice told his audience. "You work for your employer because you trust them to pay you. You get into an airplane because you trust the pilot not to crash. It's trust that moves the economy."

This feature of money, Grice warned, is why inflation can have pernicious and unseen effects, and that's what Grice is worried about today. "You cannot have this trust if you do not have money that you can trust," Grice said. "When you devalue money, you devalue trust."

Quantitative easing, printing money, devaluing currencies, monetizing debts – the increase in these activities in recent years is what has Grice concerned. He led his audience in a thought experiment to explain why.

First Grice asked his audience what happens when a government creates, say, $1 trillion out of whole cloth. (Whether by direct printing of money or by interest rate adjustments, it's all "basically the same mechanism," Grice said.) The answer is simple: It spends it, one way or another. It builds a road, or a school, for instance.

On the one hand, you have direct, tangible beneficiaries of that money – government contractors who see an uptick in business, employees they hire or pay more as a result, and so on as multipliers play out. But those who miss out on the windfall pay the cost, in the form of slightly higher prices for goods and services. For instance, maybe one of these non-beneficiaries would have bought a new house, Grice said, but a newly enriched contractor got it first by offering to pay a little more – the cost, in other words, is slightly higher prices for goods and services, even though not everyone has extra money to pay those new prices.

But Grice framed this a little differently than it's taught in Economics 101; when government expands the money supply in such ways, Grice said, "what it's done really is redistributed the wealth."

This has consequences. Non-beneficiaries get angry at those who are newly better off – after all, thanks to their increased ability to spend, you might have missed out on your dream house or been priced out of your favorite restaurant. The beneficiaries, meanwhile, feel victimized as well. Their response, Grice said, is: "‘We didn't do anything wrong. We got the contracts, we employed people – we did what we were supposed to do!'"

This, Grice believes, is the deeper cost of loose monetary policy. "What we've effectively done with this $1 trillion increase, this $1 trillion money-printing exercise, is to turn society against itself," he said. "We've actually weakened the trust, we've weakened the fabric of society."

This matches other research which shows how monetary inflation leads to societal breakdown. It is the ultimate economic warfare weapon.

Here are a few other recent headlines that support our concerns:

Our Federal debt is headed to 200% of GDP (even after the Fiscal Cliff "deal) which is much worse than Greece. George Soros says we are facing a Currency War (even if he does support the Fed's policy). Biggest withdrawal of money from American banks since 9/11.

When you put it all together, it is really quite frightening. Looking at stock prices in isolation might cause you to believe a recovery is under way. Looking at the bigger picture, however, brings forward the conclusion that Phase Three's currency collapse is just beginning.
Share on Facebook Next Story