The Chinese ARE Dumping our Treasury Bonds

We warned about this in our Pentagon research back in late 2008 and early 2009 but there were plenty of skeptics. We emphasized the risk in the 2012 NY Times bestseller, Secret Weapon. In Chapter 9, we made a strong case that China could dump their Treasury bond holdings and work fervently to establish the Yuan as a reserve currency alternative to the American dollar. We pointed out how multiple Chinese sources were planning for this and labeled it "financial warfare." We made it clear that this would prove deflationary for China but said "If China can tolerate such deflation and if it can transition effectively, it will be sitting in the shade."

Of course, there were plenty of skeptics. Consider what Fareed Zakaria of CNN stated in 2011:

"Here in the U.S., you hear many people worry that the Chinese government might stop buying American T-Bills. I think these fears are vastly overblown."

Essentially, Zakaria doubted that China would risk the economic repercussions of dumping Treasury bonds. We took the other side of that equation, feeling that economic weakness might actually make the Chinese all the more belligerent. Here is a quote from 2012's Secret Weapon (page 209):

"Beijing artificially inflated its real estate market domestically in much the same way that the United States did over the last decade–it funneled enormous resources into building new infrastructure and new housing, only to see demand level off, a trend that can cause severe economic dislocations…observers will often dismiss our warnings about Beijing's economic warfare capabilities, arguing that China is essentially doomed. The problem is, economic catastrophe could make Beijing just as aggressive as economic strength does."

While we knew then that the time had not yet arrived for China to make her move, we also knew it was just a matter of time. Starting in 2011, we began to address the risk of financial warfare in this Blog. Just look back at this February 2011 post where we argued that China had a long-term view and a five-year plan:

The Chinese Take a Long Term View; Evaluating Their 5YP

This Blog has been remarkably consistent in stating that the day would come when the Chinese would be ready to pull the trigger. We believe that philosophical consent came in late 2013 and the plan has been slowly executed since. The evidence may be starting to appear now.

We reemphasized the risk in last year's Amazon bestseller Game Plan. From page 46:

"A common objection to my warning is that the Chinese are so connected to our economy that ‘they' would never harm us. The idea that ‘the Chinese' would never harm us is ridiculous on its face; there are Chinese who continually hack our systems and who manipulate and undermine our markets. But don't the Chinese hold so much in dollar debt that they couldn't afford to see the dollar go down? China's military doesn't care. It has a much longer view of things than the next quarter's export sales. The smug response of those who believe China needs us so much that it must remain our friend is another example of American arrogance."

We have repeatedly shared how senior elements in China had worked out a plan to dump their Treasury holdings as an act of financial warfare. We also demonstrated that this plot was first envisioned by Russia, with a 2008 attempt. It wasn't until 2013, however, that the Chinese decided to join the plot to "de-Americanize" the world by removing the dollar as reserve currency.

Our warnings went unheeded despite the fact that there were corroborating studies conducted. Take a look at this video clip from For The Record.

Critical Pentagon studies were purposely downplayed even as there was a political "research shopping" effort. At one point, the Pentagon even commissioned a separate study attempting to deny the very real risk that China might start selling their U.S. Treasury holdings. They were absolute that it would never happen. We strongly disagreed as reported by Bill Gertz:

Bill Gertz, The Washington Times, Inside the Ring, October 10, 2012

Chinese military and Communist Party officials have threatened to "dump" some of China's holding of $1.17 trillion in U.S. Treasury securities to punish the United States and wage financial war in response to arms sales to Taiwan, according to a Pentagon report to Congress.

The July report plays down the prospect of what has been termed the financial "nuclear option" by Beijing against the United States.

"Attempting to use U.S. Treasury securities as a coercive tool would have limited effect and likely would do more harm to China than to the United States," says the five-page report entitled, "Assessment of the National Security Risks Posed to the United States as a Result of the U.S. Federal Debt Owed to China as a Creditor of the U.S. Government."

"As the threat is not credible and the effect would be limited even if carried out, it does not offer China deterrence options, whether in the diplomatic, military, or economic realms, and this would remain true both in peacetime and in scenarios of crisis or war."

If China sold off its U.S. debt holdings suddenly and significantly, short-term disruptions in markets would result, along with an increase in the interest rate for Treasury securities.

However, the report said doing so would impose significant costs on China, such as causing direct financial losses because of the fall in value of China's holdings. It would also call into question China's participation as a "reliable and respected economic and financial partner."

The report said that in 2010 Chinese Gens. Luo Yuan and Zhu Chenghu and Col. Ke Chunxiao urged China to sell off U.S. debt holdings in response to the latest announced arms sale to Taiwan, which China opposes as undermining its effort to reunite the island nation with the mainland. It also quoted Ding Ging, editor of a state-run news outlet, as saying China should "use its financial weapon to teach the United States a lesson if it moves forward with a plan to [sell] arms to Taiwan."

China so far has not acted on the plans, and China has continued to buy large quantities of U.S. Treasury securities, which Beijing sees as a safe place to park its money, said the report written to comply with recent congressional legislation.

Mr. Freeman, the financial security specialist, took issue with the report. He said that former Treasury Secretary Henry Paulson revealed in a 2010 book that Russia dumped American bonds in 2008 and urged the Chinese to do the same.

"The Chinese did not at that time but this does not mean they won't," Mr. Freeman said in an email.

He said the Pentagon report was "naive" and provided a "politically correct answer" that failed to address what he said were very real risks from Chinese financial warfare.

A number of scenarios exist that would involve China's government taking coercive action to dump or threaten to sell off U.S. bonds, Mr. Freeman said.

"If they perceive us as wounded, they might be willing to suffer in the short term to accomplish larger goals," he said.

Also, the report's assertion that dumping U.S. securities would be inflicting harm on China "assumes a domestic economic stability [in China] that may not exist ," he said. "The situation is much more complex than that."

Amazingly, that Pentagon report was released at virtually the same time as a new WMD study that acknowledged a very real risk of financial warfare, including the possibility that the Chinese might start dumping their Treasury bond holdings. From the same Bill Gertz story:

A Pentagon-sponsored report warns that the United States faces new threats from mass destruction weapons in the form of cyber, electronic and financial attacks, in addition to more well-known dangers from nuclear, chemical and biological WMD arms.

"In addition to the prolific conventional [weapons of mass destruction] threats posed by a vast network of state and non-state actors, the U.S. must also contend with emerging threats that are not conventionally recognized as WMD," said the report produced last month for the office of the Undersecretary of Defense for Intelligence.

The new Pentagon report appears to build on one produced for the Pentagon in 2009 by financial consultant Kevin Freeman, who stated that the United States' 2008 financial crash may have been deliberate sabotage by terrorists or foreign states.

The new Pentagon report said the May 6, 2010 "flash crash" when markets fell by 10 percent "may have been caused by an economic attack by one or a combination of methods," including the manipulation of computer algorithms that control trading or exchange traded funds that allow traders to short sell mass quantities of stock quickly and anonymously. It also could have been the result of covert currency-manipulation by the holder of a significant U.S. debt — such as China — designed to intentionally weaken the value of the dollar by preventing the United States from selling its debt to others.

This is nothing new. Treasury Secretary Geithner once proclaimed that American debt would never lose Triple-A status. He was proven wrong just three months later.

Now, The Wall Street Journal is clearly reporting that China is selling their U.S. Treasury holdings at a rapid and accelerating pace. Here is the headline and the graphic from October 7: 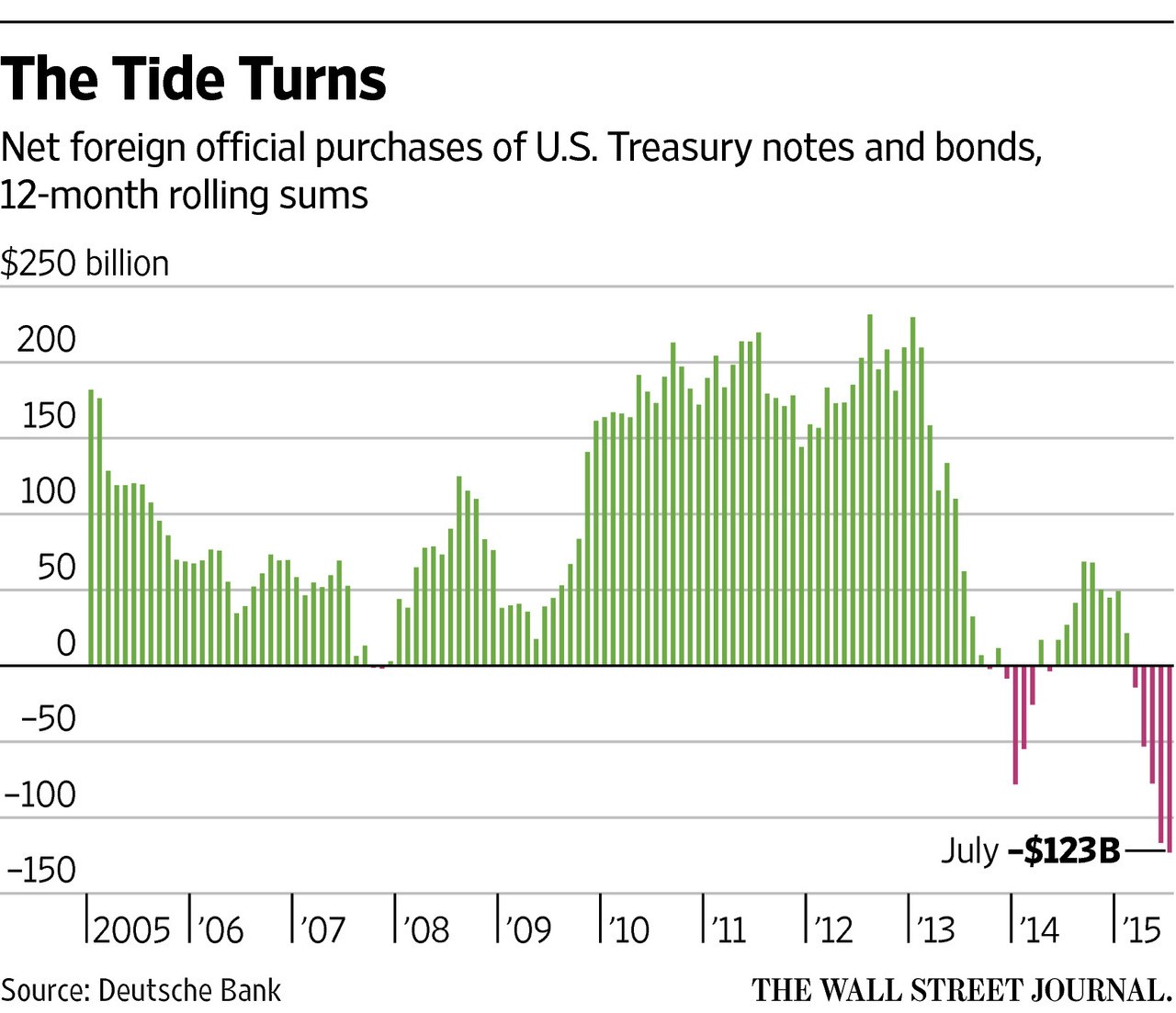 To CONTINUE READING at The Wall Street Journal….

There are only two reasonable explanations. The "benign" explanation is that China is in desperate need of hard cash to prop up the Yuan and their slowing economy. This may be the case but it is not good news for us. In fact, it would be bad. The other possibility is that China is in the early stages of a financial warfare attack. That would be REALLY bad.

The reality is that both explanations have merit. There should be little doubt that there are elements in the Chinese leadership intent on preserving their domestic economy no matter the price. But it is also true that there are elements in China intent on destroying American dollar hegemony. This isn't conjecture. It is absolute fact. And the consequences could be absolutely devastating as we have long explained. To put in layman's terms, if the Chinese stop buying our debt it is tantamount to a struggling debtor having his most prized credit card cut up in front of his face. But the bottom line is that without foreign buyers of our debt keeping the dollar as the primary reserve currency, interest rates skyrocket and our economy plummets.

Is the dollar in trouble? Potentially, yes. Even the Secretary of State, John Kerry has admitted that the U.S. dollar is at risk.

And, with the collapse in oil prices, one of the key props under the dollar, petrodollar recycling is at risk. The Saudis have a huge revenue shortage and have been forced to sell down their Treasury bonds to cover the shortfall. Without China and Saudi Arabia, who will buy our large and growing debt? The Federal Reserve becomes the primary buyer and that doesn't end well.

Only time will tell as to what element will dominate Chinese policy. Will it be the element attempting to preserve their domestic growth? Or perhaps the one intent on destroying the Western financial system?

We know that the Russians and Chinese are now cooperating across the board, militarily and economically. We know that the Chinese military has threatened financial warfare. They have threatened to dump Japanese bonds as a weapon. Even the Communist leadership has considered it (as reported in the official journal of the Communist Party, Quishi). And all of this is based on the 1999 People's Liberation Army (PLA) book of military doctrine titled Unrestricted Warfare.

What a reminder that a global economic war is underway. Time to wake up to reality?