The Death of the Dollar

In late 2008, when the U.S. Treasury bond seemed the safest investment in the world and the dollar once again reigned supreme as a safe haven, we predicted a Phase Three attack. At the time, we said that the way things would play out, so-called experts would say that it was just a natural and inevitable result of global events. Never mind that these would be the same people who dismissed the concern only a short while earlier. We have documented all of this repeatedly in our final report for DoD (Economic Warfare: Risks and Responses published in June 2009), our book Secret Weapon (www.secretweapon.org) and in this Blog. We explained well in advance that the BRIC nations would call for the end of the dollar as reserve currency, piling on to similar expressions from the IMF and UN. We stated without hesitation that the US Treasury would lose Triple-A status even as Timothy Geithner said it could never happen.

Now, the alarm bells are ringing louder than ever before. But, the policymakers are ignoring the handwriting on the wall, lulled into complacency by lower interest rates paid by our Treasury. Let's be clear. This is not an "all clear." Just today, we received some powerful research by Citigroup titled The "Frozen Hell" of a High Deficit, Low Rate Environment. Here are some of the insights that support our concerns:

"As was the case for a decade in Greece, low government bond yields delayed recognition of a problem. The effects on investment spending, employment and income never produced are more difficult to measure than any obvious interest rate spike related to large deficit

Greece's budget and external imbalances went undisciplined by markets for a full decade. For how long could the U.S.?"

Take a good look at Figure 2 from the Citi research. Greek bond yields remained reasonable through 2010 despite the warning bells of a bad budget situation. 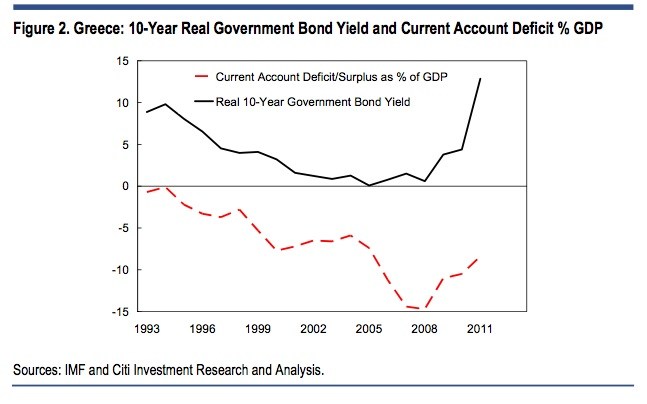 The research makes a great point. Just because interest rates remain low for an extended period does not mean that there aren't any underlying problems. The analysts go on to question the sustainability of the U.S. position in light of our budget situation. 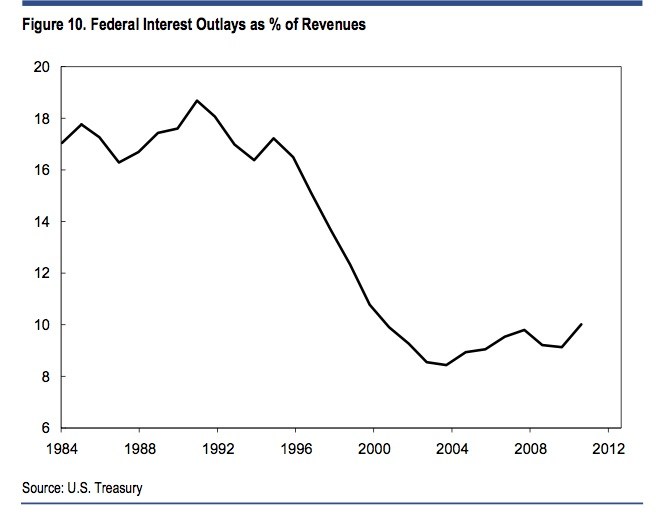 Now, focus on Figure 10 for a bit. Looking only at interest rates, where our 10-year bond pays just 2%, things look pretty decent. Interest rate outlays are a small proportion of tax revenues. But, what happens if the U.S. Treasury rates spike like Greek bond yields? If our Treasury rate jumps from 2% to 7% (something not unprecedented), we would be paying an additional up to $800 billion in interest (assuming we financed primarily via 10 year bonds). That would be roughly one-third of all tax revenues and it gets worse from there. That is unsustainable.

Now, we should be clear that Greece was able to operate in a fiscally unsound manner for quite a while. In fact, it continued until February 2010 when a group of hedge funds, led in part by Soros, decided to target the country. Credit Default Swap rates spiked and a bear raid was on.

Take a look at some of our previous posts on this topic for background:

Italy in the Crosshairs

Now, the United States is not Greece as Warren Buffett and others will point out. While our budget problems are quite similar, we have a printing press for currency and the Greeks do not. They are not allowed to print Euros. And, because the dollar is the reserve currency of the world, other countries have to use dollars for international trade. So, even if we print them in mass quantities (or the North Koreans for that matter), they will not be worthless paper, or so the argument goes.

The reality is that having a printing press can at best provide only a temporary respite for trouble. The dollar is fast losing its unique status as primary reserve currency as other nations are learning they can trade without dollars. Our economic war with Iran is hastening the reality that oil will trade in other currencies (see previous post, Our Paper vs. Their Oil). Now, we see China getting very aggressive in replacing the dollar.

From the Financial Times yesterday:

"The China Development Bank will sign a memorandum of understanding in New Delhi with its Brazilian, Russian, Indian and South African counterparts on March 29, say people familiar with their talks. Under the agreement CDB, which lends mainly in dollars overseas, will make renminbi loans available, while the other Brics nations' development banks will also extend loans denominated in their respective currencies.

The initiative aims to boost trade between the five nations and promote use of the renminbi, rather than US dollar, for international trade and cross-border lending. Under 13 per cent of China's Asia trade is transacted in renminbi, according to Helen Qiao, chief Asia economist for Morgan Stanley. HSBC estimates that the currency's share of regional trade could swell to up to 50 per cent by 2015."

When foreigners stop demanding dollars for trade, the dollar will lose value, making it more expensive to finance our debt with rising bond yields. This will make fewer foreigners interested in buying our debt because continually rising yields means that the value of the bonds will fall. The Federal Reserve will basically have to print money to buy the bonds. At some point, the printing press will make the dollar worthless. It's happened to other major currencies. Keep in mind that the dollar has lost 95% of its purchasing power over the past 100 years. Now, because it was over a long period of time, people's income could adjust. But, what happens if it loses 95% in a matter of days?

All of this is important because it says first that we are vulnerable, just as Greece was vulnerable. We may last a while as the Greeks did. But, when the financial terrorists turn on America, the end will come swiftly. Greek one-year yields went over 1000% this week. No economy can sustain that. And, it was just two years ago that the yields were normal.

The second important lesson is that a trigger set off the catastrophe. When the hedge funds turned en mass against Greece it was a very short time before everything fell apart. What happens when the economic enemies turn against us? We have laid out the Who? What? When? Where? and Why? in Secret Weapon and this Blog.

Remember that the 9/11 attack was purposed by bin Laden as an act of Economic Warfare. In fact, prior to the attack, the Office of Management and Budget had projected that ALL Federal Debt would be extinguished by 2010. After 9/11, we pumped money into the system and ran up large budget deficits. Then, Act II was the direct attack on our financial markets as we have outlined. The bear raids on Lehman were orchestrated. The net result? An additional trillions in debt and even more monetary stimulus. Everything looks natural but if you step back and look at the bigger picture you can see the pattern at work.

If we address this now, we can take some actions as outlined in the book to prevent immediate disaster. This can buy us some time to get our fiscal and monetary house in order. We need our policymakers to understand that this is a Global Economic War before it is too late.