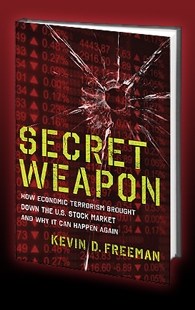 Nearly four years ago when we began to explain that there was an economic war in progress, few paid attention. Many scoffed. But some took time to look at the information and were convinced. There should have been little doubt because the data is compelling. But, American arrogance, supported by political partisanship and outright greed forced a narrative of what happened that excluded the reality of economic warfare or even the consideration of financial terrorism. So, despite contemporaneous concerns that our markets were being manipulated and the seriousness of the implications (as later explained on CSPAN by a Democrat Congressman), there has been very little recognition of an economic war underway. In fact, the mere suggestion of financial terrorism or economic warfare has been met primarily with derision. This is very sad as otherwise intelligent critics fail to even make a rational argument. They suggest that the reality of American greed or failed policies, or too little regulation is all we need to know about what happened in 2008. Their argument fails miserably on two counts:

First, there is no definitive agreement on what happened. The Financial Crisis Inquiry Commission published three reports (one majority and two dissenting) because there is no agreement on what happened despite what so many will try to tell you. And, despite being over 500 pages thick, there isn't a single reference (even dismissive) to the concept of malicious activity in the form of financial terrorism or economic warfare. This oversight wasn't because the Commission was disinterested, however. In fact the members were very interested and I have the emails from them to prove it. In fact, there was very specific pressure applied to the Pentagon to get the report released. But, by the time the Commission received a copy of the 2009 report on Economic Warfare, partisan bickering had reached such a fever pitch that no further evidence was reviewed. Meetings were cancelled and publication of three reports rather than one ensued. But, the statement that we all know what happened is ridiculous. Not even the FCIC could agree on a single narrative.

The second major fallacy with the argument against the idea of financial terrorism or economic warfare is that it has been made without any real analysis of the trading data or facts presented. In other words, "don't confuse me with the facts, my mind is made up." The fear by detractors is that looking at the possibility of economic warfare might somehow diminish the reality of domestic failure. Frankly, this is simply ludicrous. In fact the contrary is true. For those who believe that Wall Street greed brought down our economy, a reasonable understanding of economic warfare provides additional support for cleaning up the mess. Wall Street greed can be seen as creating a national security vulnerability. For those who wish to blame a lack of regulation, the same is also true. And, for those who want to blame Washington interference in the housing market via Fannie Mae, Freddie Mac, and the Community Reinvestment Act, the same is also true. No one among the many experts who have looked at the data denies that there were and are serious domestic, self-inflicted vulnerabilities.

But, is it rational to believe that the enemies of the United States either don't recognize these vulnerabilities or have chosen to ignore them?

We have documented Chinese awareness of our economic weaknesses and how to exploit them. We have also shown how this awareness is recognized by Putin's Russia, al Qaeda, Iran, and Venezuela. It is foolish to dismiss this reality.

Every day, we see more evidence of the fact that we are in a global economic war. The war started on 9/11/2001 with al Qaeda's attack on our nation. It continued in subtle ways until 2008. At that point, the Russians dumped our government backed bonds and attempted to persuade the Chinese to join them in a move designed to cripple our Treasury. Then, as we have documented, there was a bear raid attack on Lehman Brothers in September that almost collapsed the global system. Despite trillions of dollars dedicated to recovery, the global economy remains incredibly weak. And, the economic war is just now being recognized.

Here are some recent reports that highlight the economic war underway:

45 Signs that China is Colonizing America

China Warns Australia to Choose "Godfather" – China or US

A Machiavellian Scheme for a United States of Europe?

The Exposed Backbone: The Risk of Cyber Attack

Anonymous: ‘We have access to every classified database in the US'

Why Is The Obama Administration Allowing The Chinese Government To Buy Up U.S. Oil And Gas Deposits Worth Billions Of Dollars?

Now, these links represent just a small sampling of articles and references from the past month that support the reality that a global economic war is already underway. The most obvious example is between the United States and Iran. We have already covered this in two previous posts: https://globaleconomicwarfare.com/2012/02/our-paper-or-their-oil/ and https://globaleconomicwarfare.com/2012/02/irans-secret-weapon-threat. Basically, we cut off Iranian access to the U.S. dollar for trade by denying them use of the international banking system. They have responded by trading oil for gold or other non-dollar currencies. We have also used cyber weapons such as Stuxnet and Flame. They have responded with threats and efforts to circumvent the global banking system by building a SWIFT alternative.

Here is a very clear statement from the Iranian News Agency:

TEHRAN (FNA)- The US and EU Sanctions against Iran's economy have not only failed but also backfired since they have encouraged Iran's further progress, Iranian Oil Minister Rostam Qassemi said. "Today, the Islamic Iran is a leader in economic warfare; the oil industry is powerfully standing tall against all pressures and sanctions by hostile powers," the minister stressed.