The EMP Threat is Being Recognized…Finally 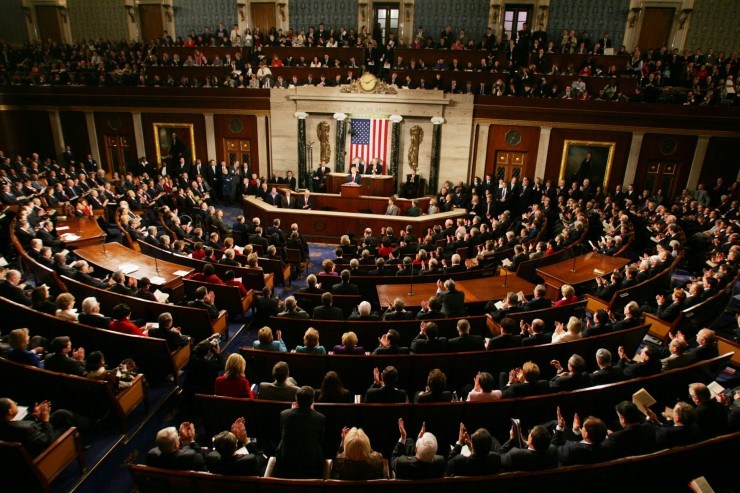 Good News! The Secure the Grid Coalition finally appears to be making headway with some members of Congress. While most people are unaware of the very serious threat to our electric grid, we have covered this issue on multiple occasions in this Blog. Here are just a few examples:

Only recently has the leadership in the Congress even begun to recognize just how serious this really is (despite multiple government studies that have documented the threat). In that regard, the following story becomes very important:

WASHINGTON, D.C. — Members of Congress want to know more about the capabilities America's adversaries possess to shut down the nation's power grid.

The intelligence authorization bill passed by the House of Representatives on May 30 includes a provision mandating the head of the U.S. intelligence community, the director of national intelligence, submit to Congress within six months of the bill's passage "a report on the threat posed by man-made electromagnetic pulse weapons to United States interests through 2025, including threats from foreign countries and foreign non-State actors."

The current North Korean regime's goal of being recognized as a nuclear power and the apocalyptic vision of Iran's religious leadership reportedly motivate both nations to pursue weapons able to emit a catastrophic electromagnetic pulse of energy that could knock out the power grid and kill millions of Americans within the first few minutes of the blast. The provision was attached to the bill without objection as an amendment introduced by Arizona Republican U.S. Rep. Trent Franks, leader of the Congressional EMP Caucus, prior to its passage onto the Senate.

Upon introducing the amendment to the bill, Franks emphasized he wasn't looking to task another federal agency with assessing the U.S. electric grid's vulnerabilities to EMPs and solar storms, also known as geomagnetic disturbances.

"In fact, Mr. Chairman, there have now been nearly a dozen federal government reports and studies on the dangers, threats and vulnerabilities the U.S. electric grid faces from EMP and GMD, including reports from the EMP Commission, Department of Homeland Security, Department of Defense, Department of Energy, the Federal Energy Regulatory Commission, the National Academy of Sciences, and the U.S. national laboratories," Franks said.

"All of them come to similar conclusions," he said, "the U.S. electric grid is dangerously vulnerable to EMP and GMD."

The Senate's version of the bill, however, scheduled for a potential vote this week in the House, makes no mention of assessing threats from electromagnetic pulse weapons. The bill is sponsored by California Democratic U.S. Sen. Dianne Feinstein, chairwoman of the Senate Select Committee on Intelligence.

Concern over the vulnerability of modern civilization's electrical backbone isn't new. Nearly 52 years ago, the electromagnetic shockwave of a 1.4 megaton nuclear weapon detonated by the U.S. government 250 miles above the Pacific Ocean, Starfish Prime, disrupted electricity and phone service over 800 miles east of the blast in Hawaii…Soviet scientists observed similar effects during their own high-altitude nuclear weapons tests during the Cold War, according to the testimony of a Defense Department official during a congressional hearing in 1997…

As previously reported by Watchdog.org, experts have warned that while the military has been hardening its systems for years against the possibility of an attack from the Soviet Union during the Cold War, the civilian world is woefully unprepared.

A 2013 report by London-based insurance market Lloyd's of London considered a Carrington-level geomagnetic storm to be "almost inevitable in the future," and damages could cost the economy from $600 billion to $2.6 trillion. The report also estimates that between 20-40 million people in the United States were at risk of an extended power outage lasting between 16 days to 1-2 years due to the damage caused by a Carrington-level geomagnetic storm.

Peter Vincent Pry, executive director for the Task Force on National and Homeland Security, told lawmakers on Capitol Hill during a hearing in May he believed the damages wrought by an EMP could kill as many as nine out of 10 Americans. Pry also served in the Central Intelligence Agency, as professional staff on the House Armed Services Committee, and on the Congressional EMP Commission, which was established by Congress in 2001 to research the U.S. electric grid's vulnerabilities to an EMP attack.

The costs of upgrading the grid, by comparison, are a drop in the bucket. The Congressional EMP Commission, for example, estimated a $2 billion investment would be enough to protect the grid, approximately the same cost of the 2012 presidential election. While testifying before the North Carolina Joint Legislative Commission on Energy Policy in December 2013, Pry told state lawmakers he estimated $10 million would be enough to protect North Carolina's grid. Upgrade costs appear to become even more manageable when considered on an individual ratepayer basis. Over three-and-a-half years ago, a Federal Energy Regulatory Commission study found upgrades to protect the power grid from such a blast could mean as little as 20 cents extra per month for ratepayers' electric bills over three years.

Not willing to wait for the federal government to act on the problem, states have taken it upon themselves to protect their residents. Frank Gaffney, founder and president of the Center for Security Policy, a Washington, D.C.-based national security think tank, told Watchdog.org, however, better answers are still needed to address the problem. Gaffney, like Pry, is one of a few experts working to spread awareness about the EMP threat to the nation's infrastructure.

"What we do know is that when estimates by Lloyd's of London, or by the National Academy of Sciences, state that the costs to the country will run in the trillions, and take years to put Humpty Dumpty back together again, it gives you a sense of the magnitude of the danger that we're facing, and therefore why the investment needs to be made, whatever it is," Gaffney said.

To CONTINUE Reading at Human Events…

Couple this story with the reality that terrorists took down the power grid in Yemen recently (as shared at http://securethegrid.com):

For the first time in history, a terrorist attack on the electric power grid has blacked-out an entire nation. Media attention has been so focused on the terror group Islamic State of Iraq and Syria (ISIS), on their brutal conquest of northern Iraq and advance toward Baghdad, that the perhaps even more significant terrorist threat in Yemen has been ignored.

Yemen, a nation of 24 million, is an important U.S. ally in the war on terrorism and has been the scene of some of the most significant episodes of that war. AQAP, based in Yemen, is notorious for its aggressive and ingenious terror operations against the United States.

For example, on October 12, 2000, AQAP used plastic explosives to convert a motorized dinghy into a torpedo that blasted the USS Cole, killing and injuring 56 sailors, and nearly sinking the sophisticated guided missile destroyer, worth almost one billion dollars. The 9/11 Commission attributed U.S. failure to retaliate for Cole as the proximate cause for Al Qaeda's launch of the September 11, 2001 holocaust that killed 3,000 Americans.

AQAP has disguised bombs to look like soft drinks, underclothing, and printing cartridges in its persistent efforts to smuggle explosives aboard airliners bound for the United States.

Last year, the Obama Administration evacuated U.S. embassies across the Middle East in response to a plot led by AQAP, involving coordinated activity by terror groups throughout the region.

On August 2, 2013, Administration and intelligence community officials disclosed that just days earlier, the U.S. intercepted communications among senior leaders of Al Qaeda indicating a major and imminent threat to U.S. interests somewhere in the region of the Middle East and North Africa.

Consequently, the State Department announced it was executing an "orderly downsizing", in effect an evacuation, of some two dozen embassies and diplomatic missions. The unprecedented evacuation included facilities in Egypt, Iraq, Kuwait, Saudi Arabia, Israel, and Yemen.

According to the Obama Administration, last year's terrorist teleconference was attended by more than 20 leaders of Al Qaeda and affiliates participating from the Middle East and North Africa. Al Qaeda members in the conference included Nigeria's Boko Haram, Pakistani Taliban, Al Qaeda in Iraq, Al Qaeda in Islamic Maghreb, Al Qaeda in Uzbekistan and others. One intelligence officer reportedly described the gathering as "a legion of doom".

The full objectives of last year's terror plot are unknown, but one goal included the takeover of Yemen. Teams of terrorists allegedly were already in position, many of them disguised as Yemeni military personnel, ready to attack and seize military bases throughout Yemen.

Why Yemen? Possibly because North Korea has provided to Yemen at least 15 Scud-B mobile missiles, capable of delivering nuclear, chemical, biological or high-explosive warheads weighing one ton to a range of 300 kilometers. Iran has demonstrated that Scud missiles can be ship-launched from a freighter.

The Obama Administration credited itself with thwarting last year's big terror plot by evacuating embassies and publicly warning allies, because nothing much happened. Some analysts, including myself, criticized the Administration for disclosing sources and methods, making it more likely that the U.S. and allies would be surprised the next time.

Is it possible that the big terror offensive now rolling across the Middle East is the unfolding of the plot planned last year? Media reporting acts as if the ISIS conquest of northern Iraq, Taliban attacks on nuclear-armed Pakistan, and the terror blackout in Yemen are unrelated. But all of these actors were plotting something together last year.

Worry most about the Yemen nationwide blackout–which tomorrow could be the United States.

A study by the U.S. Federal Energy Regulatory Commission found that attacks on just nine key transformer substations could blackout the entire nation for weeks or months. The Congressional Electromagnetic Pulse (EMP) Commission warned that a nuclear Scud missile launched from a freighter could blackout the U.S. for a year or more, killing up to 9 of 10 Americans by starvation and societal collapse.

Yemen is yet another warning to protect the U.S. electric grid.

Terrorists have proven a willingness and capability to exploit vulnerabilities in attacking power grids. Do not doubt. This is a serious threat that must be addressed. Hopefully Congress and the various states are getting the message.

If We Lose Religious Freedom, We Lose Everything | Ep 156