The lady doth protest too much, methinks

The rancor created over one of President Trump's tweets is pretty amazing. It has gone beyond partisan and has resulted in Congressional inquiry and national debate. And, the overwhelming denials seem to be artful deflection from some truly serious issues. Here is what the President said in a tweet: 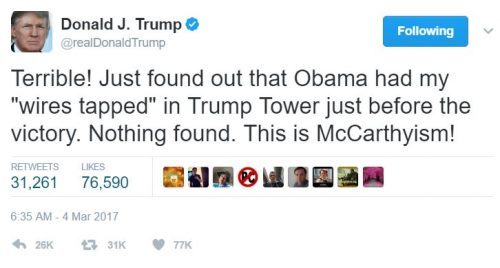 This short thought, limited to 140 characters by Twitter, has resulted in a massive media explosion, calls for impeachment, an international incident, and a recharged radical effort to destroy the President. Attacks have come from both parties, the media, and the global Intelligence Community (IC). Today, we heard very clearly from the Chairman of the House Intelligence Committee that there was indeed surveillance of the Trump campaign, although he described it as incidental and legal. Shouldn't that put the issue to rest so we can move on to fixing real problems? Unfortunately, it hasn't and that is the real point. This isn't about facts or truth or even right and wrong. It is a political game designed to take down a President. Rather than delve into all the details, however, perhaps it might be useful to take a step back and consider a number of key observations regarding all of this.